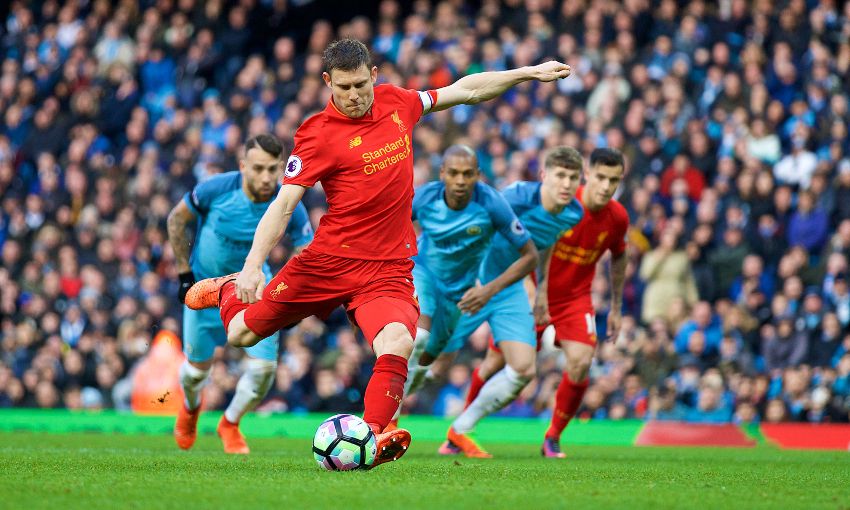 Video: How Emre was everywhere in battle with City

Jürgen Klopp has explained why he looked away when James Milner stepped up to take his penalty against Manchester City on Sunday.

The Liverpool No.7 put his team ahead at the Etihad Stadium with an expert spot-kick inside the left post, after Roberto Firmino had been fouled inside the area by Gael Clichy.

It was the seventh time this season and the 10th in total since he joined the Reds in 2015 that Milner has successfully dispatched a penalty.

And Klopp later revealed that it was superstition – not doubt – which made him turn his back as the captain for the day sent Willy Caballero the wrong way.

“I don’t want to touch wood, but I hope it stays like this,” the manager told Liverpoolfc.com.

“The only reason I don’t watch them is because from the start of the season he is doing a job well without my support. So that’s why – I don’t want to be responsible if he fails one or misses one! That’s the only reason.”

Sergio Aguero’s equaliser midway through the second half brought balance back to the score, before both teams were guilty of profligacy from clear opportunities in front of goal.

Klopp’s immediate post-match reaction was one of disappointment – but that gave way to a more philosophical consideration of a frantic contest in Manchester.

“There were 15 minutes maybe, in the second half, when we really had them; it felt like ‘OK, come on, now do it’ and we didn’t. We lost a little bit of direction in these moments.

“We had to recover obviously, too, but we had the ball. They moved a little bit around and if we were a little bit more clear in this phase… but they invested all and both teams obviously needed these 10-12 minutes to come through the last 15. [It was] good, but not fantastic.”