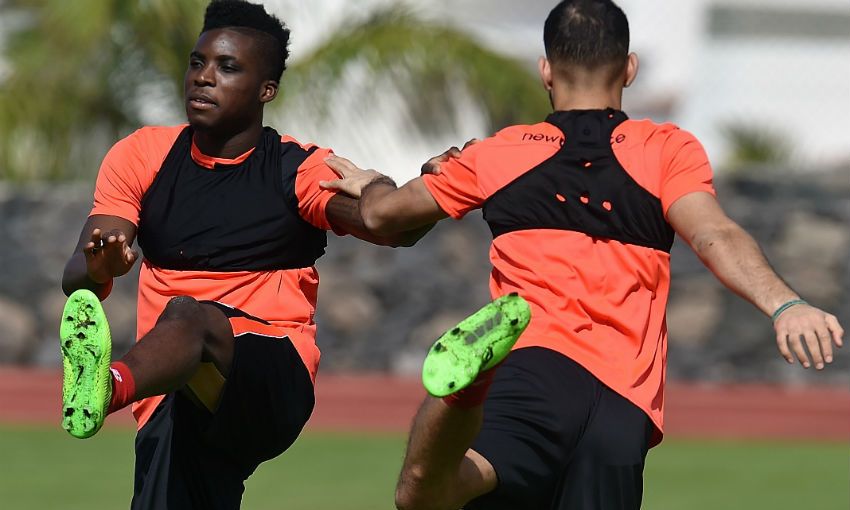 Conversations with Jürgen Klopp and Jordan Henderson have given Sheyi Ojo an added incentive to force his way back into Liverpool’s first-team set-up.

Young winger Ojo was involved in Klopp’s side in the closing stages of last season, but saw his progress curtailed by a back problem sustained during the Reds’ tour of America in the lead-up to the current campaign.

The 19-year-old made his return from injury for the U23s in early December, and has been a regular fixture in Mike Garrity’s team since then.

During the Reds’ training camp in Tenerife earlier this week, Klopp revealed that he sat down with Ojo recently after the England U19 international had asked him to outline what he needs to do to get another chance at senior level.

“The easiest answer was ‘more’, because when you are that skilled, then come on!” the boss told Liverpoolfc.com.

“[I asked] ‘When was the last time you did a 100 per cent sprint?’ Technical-wise he’s so good that he doesn’t use it, but that makes no sense because at the highest level you need this speed.

“Now at U23 level I can see him running like crazy to show ‘yes, I’m ready’ and that helps him a lot. Even in not-perfect games you can see he’s involved in other parts.

“So, it’s a very important moment for him and if he keeps this attitude then everything will be good in the end, 100 per cent.”

So that’s Klopp’s take on the situation, but what about Ojo himself? How has he reacted since his discussion with the boss?

“He mentioned a couple of things that I’ve taken on board. Ever since then, in training and the U23 games I’ve played in, I’ve tried to showcase what he wants from me,” Ojo explained to Liverpoolfc.com.

“I feel like I’ve done well and listened to what the manager’s said, and hopefully in the near future I can get another chance, another opportunity. But until then I’ll keep working hard.”

When asked to elaborate, Ojo continued: “He mentioned that he wanted me show that I wanted it.

“As a young player there’s always going to be ups and downs and it’s been hard for me getting injured and then coming back and not really getting an opportunity, but I’ve had to dig deep with the support of the staff and I feel that I’m getting better in every game.

“My work ethic’s probably been the best it’s ever been since I’ve been playing football, which is obviously a positive, I’m more direct when I get the ball like the manager wants me to be. So hopefully I’m heading in the right direction.”

LFCTV GO: Sheyi on getting advice from the boss and the captain

The training camp in Tenerife represented Liverpool’s second trip to Spain in a little over a month, after Klopp’s squad visited La Manga in February.

It was there that the manager conducted an FA Cup-style draw to decide who would share rooms - a process that saw Ojo paired with captain Henderson.

And that provided the teenager with an opportunity that he simply could not pass up.

“As soon as I found out I was with Jordan I spoke to him and asked him what I can improve on,” Ojo said.

“Obviously he’s the captain of this club so he’s got a lot of experience and he gave me some messages to build on.

“I feel like I’ve been doing that and he’s said he’s noticed a difference as well, so I think I’m in the right state of mind and I’m going in the right direction.

“He’s a great player and a great person. He’s a great leader for this team, so to get feedback off him is obviously a bonus. We shared a lot of opinions on how I can improve and how this team can improve going forward.”

As part of a group comprised of first-team regulars not away on international duty and Academy hopefuls in Tenerife, Ojo was determined to make the most of his chance to impress Klopp and his coaching staff.

“Every day in training I’m trying to prove to the staff, to the manager and to myself that I’m trying to get better and to keep improving,” he added.

“Just because we’re on this trip and in a different country doesn’t really change my targets, even at Melwood that’s my goal every day, and I’ve been looking to do the same here.

“I feel like you’re your own worst enemy and if I work really hard in training and I’ve given it my all then I can have peace of mind after training, knowing I’ve given it my best shot. That’s the aim now and for the future.”

Sheyi Ojo stars in the latest episode of #LFCWORLD, which also begins the build up to this weekend’s Merseyside derby and pays tribute to 'Mr Liverpool', Ronnie Moran.

#LFCWORLD is being shown on LFCTV throughout the week and is also available on demand on LFCTVGO.