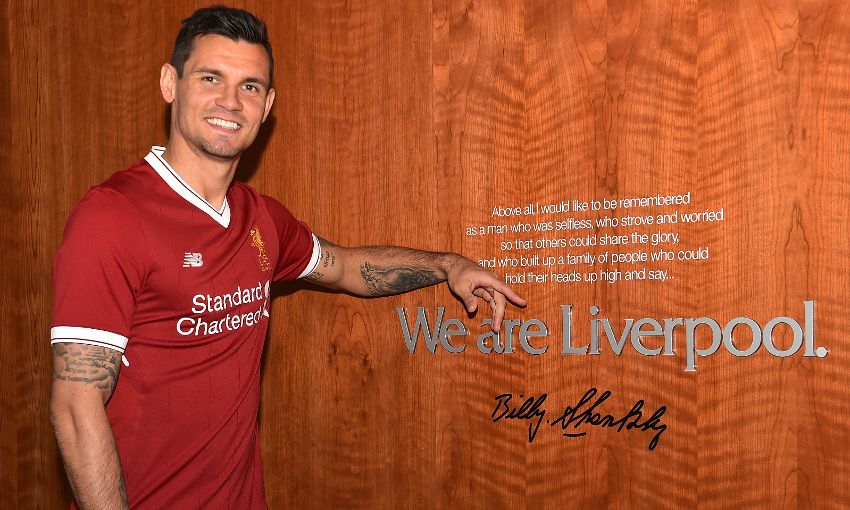 Committing his long-term future to Liverpool Football Club was a decision that didn’t require any consideration from Dejan Lovren, particularly as he is convinced the Reds are heading for success.

The Croatia centre-back inked the new deal at Melwood on Friday morning to ensure his near-three-year stay with the club will be prolonged.

And Lovren is adamant that all the components are in place to ensure Liverpool bring silverware back to Anfield over the course of that contract.

Asked whether he felt Jürgen Klopp’s side were primed for a bright future, the No.6 told Liverpoolfc.com: “Yes, definitely. Definitely we are not here just to play the games and to be in the middle of nowhere because of the quality of the team and a top manager, who won almost everything with Dortmund.

“Next season, we will again try to reach as many points as possible, but firstly to finish this season well and qualify for the Champions League.

“When Jürgen came in, he changed me a lot. Not just me, he changed a lot of players with the mentality, working hard on the pitch, on the training ground and he is still fresh here because it’s only a year and half, but everyone has seen the big difference.

“With his ideas and plans, and also with the club, it can be a positive thing in the end.”

Liverpool’s immediate challenge is to secure a top-four finish in the final quartet of Premier League games in 2016-17.

The Reds face stiff competition for a Champions League berth from several clubs, but Lovren’s confidence is unwavering.

“I would be stupid if I was to say we don’t believe in this,” he stated. “We started the season so strong and we believed from day one in pre-season – and we are still believing.

“Unfortunately, we had some injuries and we were unlucky in those moments, but we still have a big squad with young talents.

“We will definitely fight in the last four games to take all 12 points.

“I always believe. I believe in the team and I believe in every single person who believes in us. This is the most important thing. I think we would deserve it at the end because of how well we’ve done for all of the season. I am pretty sure we will see each other in the Champions League.”

Lovren has mixed memories of European competition with Liverpool since his move from Southampton in July 2014 – but arguably his finest hour in Red so far came in last season’s Europa League.

Few, if any, will need reminding it was the 27-year-old who sensationally crashed home an injury-time header against Borussia Dortmund in front of the Kop to settle an epic quarter-final tie just over one year ago.

“This is why I want to be here,” Lovren smiles. “This is what’s possible with Liverpool, the kind of moments like that.

“You will never forget these moments, they will always be remembered in the history of the club – the fans, the people, everyone will remember them.

“It’s not just this game, I want to be remembered as a player who gave everything on the pitch just to fight for this club.”