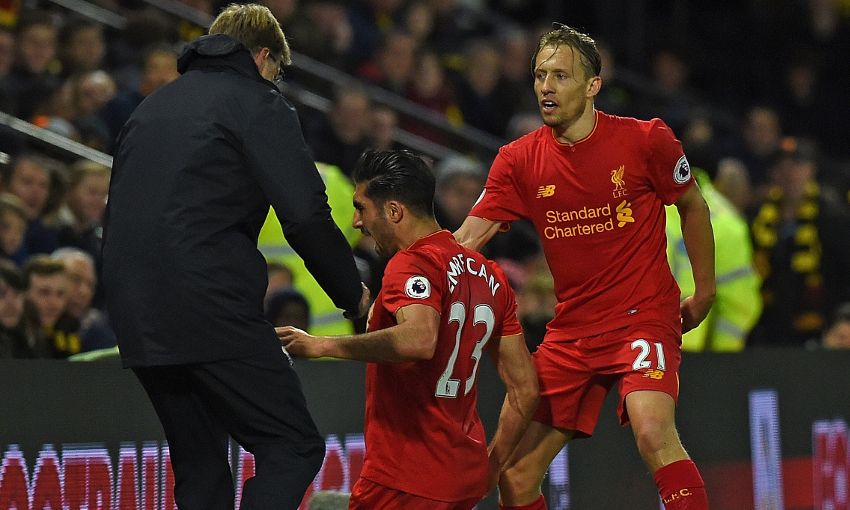 Lucas Leiva has called on Liverpool to complete the job of securing a top-four finish after taking charge of their own destiny again with the vital win at Watford on Monday night.

After Manchester City, Manchester United and Arsenal dropped points at the weekend, the Reds knew victory at Vicarage Road would put the pressure back on their rivals.

The result was clinched in style by Emre Can, who struck a Goal of the Season contender with a sensational overhead kick to spin the ball beyond the reach of Heurelho Gomes.

Though the hosts hit the bar in stoppage-time, Liverpool held on - and Lucas insisted it was especially important to bounce back after the Anfield defeat against Crystal Palace.

“It’s another big result for us away from home against a very difficult and physical team with quality players, and especially after the weekend when other teams dropped points, so it’s in our hands now really,” he told Liverpoolfc.com.

“We needed to win, especially after our last game against Crystal Palace. We are happy and I think we deserved it even though at the end we needed a bit of luck. But overall, it’s a well-deserved three points.

“The three games we have left now are all finals and hopefully we can get the victories to secure the Champions League spot.”

Liverpool’s No.21 also praised the determination and spirit that has seen the Reds dig deep to gain vital wins over Stoke City, West Bromwich Albion and now Watford.

He added: “These teams we’ve played, the likes of Watford, West Bromwich Albion and Stoke City, they are very strong at home, so I think we did well.

“We controlled the game at Watford and probably at some points in the game we could have scored another goal but fair play to them, they kept going.

“We can still improve, of course, but it was all about the result and we got it.”

Lucas also admitted he was delighted to record an assist by providing the forward pass for Can’s wonder goal at Vicarage Road.

“We have worked a lot on movement in training,” he added.

“I’m trying to improve and add these things [assists] to my game and hopefully next will come goals, but I know what the manager wants from me and he wants me to improve on assists, and I think I’ve been doing well on assists, so that’s quite good.”