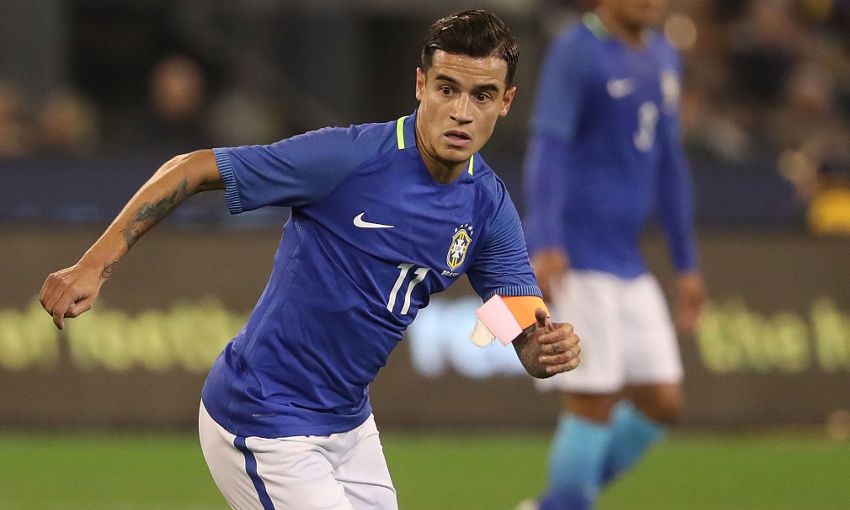 Liverpool's Philippe Coutinho captained Brazil for the first time as they earned a 4-0 friendly victory over Australia in Melbourne on Tuesday.

The Reds No.10 took up the armband as he played just over 70 minutes in a convincing win for Tite's men, who bounced back from last week's 1-0 defeat to Argentina at the same ground.

Diego Souza's brace, which sandwiched strikes from Thiago Silva and Taison, ensured Brazil signed off the 2016-17 season in style at the MCG.

Coutinho's maiden outing as skipper got off to a dream start as the Selecao opened the scoring with just 11 seconds on the clock.

Giuliano made the most of an errant pass out from the back, nipping in to pinch the ball and laying on a chance for Souza, who sent a low shot into the far corner.

LFCTV GO: Highlights of victory for Coutinho and co

With just under half an hour gone, the striker believed he had doubled his personal tally with a fine chipped finish from David Luiz's through-ball, but was adjudged to have erred offside in the build-up.

Australia looked to shore things up after that let-off and, with the pitch proving problematic on occasions, the visitors were struggling to find the final pass needed to extend their lead.

The quality of the surface mattered little in the 62nd minute, though, as Coutinho's brilliant free-kick was headed powerfully onto the bar by Luiz and his fellow centre-half Silva managed to nod home in the ensuing melee.

And, as a young Australian team tired, the quality of their opponents began to tell more and more.

The gulf in class between the sides was underlined when, 20 minutes from time, a brilliant exchange in the box ended in Taison coolly arrowing a backheeled assist into the bottom corner.

Aussie goalkeeper Mitchell Langerak continued to perform heroics in the hosts' goal in the aftermath of that strike but there was still time for Tite's team to grab another.

With the game entering injury time, Souza climbed highest from a Willian corner to head in and put the seal on a blistering performance from Coutinho and co.