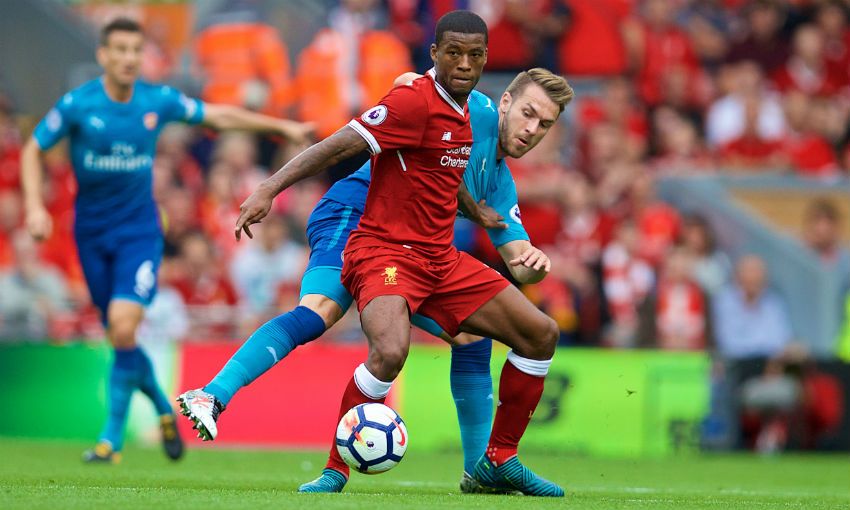 Georginio Wijnaldum has hailed a performance to be proud after Liverpool beat Arsenal 4-0 on Sunday afternoon.

The Reds were in irresistible form as they swept Arsene Wenger's team aside, scoring twice in each half to move up to second in the Premier League table.

For Wijnaldum, who played a key role in hosts' midfield dominance, every aspect of the showing was worthy of commendation.

"[It was] a fantastic performance from the whole team," he told Liverpoolfc.com.

"We knew that this could happen if we started the game well, spot on, like we did against Hoffenheim.

"Everything went well in the game, we scored four goals, we kept a clean sheet, so I think we can be proud of ourselves."

Liverpool went close on a number of occasions in the early stages and took just 17 minutes to eventually open the scoring through Roberto Firmino.

Wijnaldum believes the Reds' focused start, allied to their knowledge of their opponents' gameplan, were crucial to the eventual result.

"From the start of the game we were spot on, we were concentrated," he added.

"We were sharp. Second half, they had one big opportunity in the first minutes, so we didn't start well in the second half, but after that we dominated the game and did well."

The Dutchman also revealed that Liverpool's third goal - a rapid counter from an Arsenal corner, well finished by Mohamed Salah - was a ploy he and his colleagues had worked on at Melwood.

He explained: "If we train at things and they happen in the game and score goals it gives you a good feeling because you train all week to score goals like we did.

"With the 3-0, Mo was really concentrated and knew if we regained the ball we could create a chance in the counter-attack.

"That's what we do in training, defending set-pieces and after you defend the set-piece trying to create a chance because they are not well-organised in that moment. It's a really good feeling."