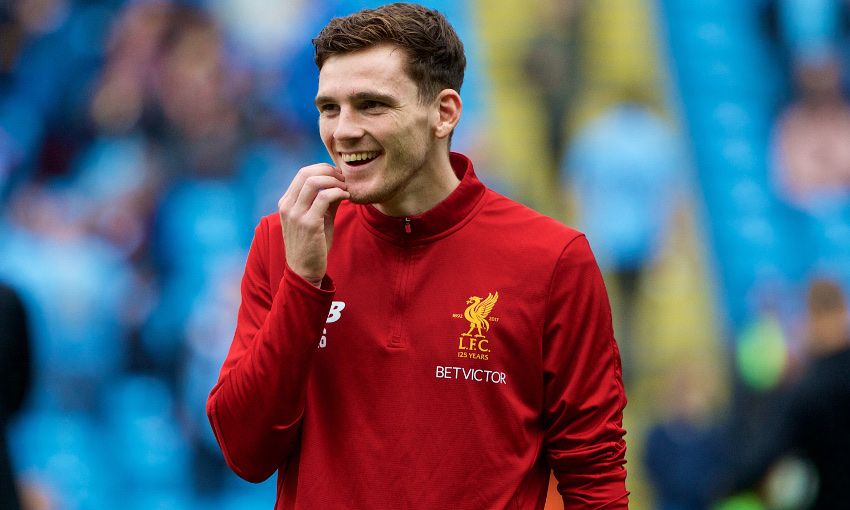 'It's his time' - Klopp explains Sturridge start at Newcastle

Andy Robertson can pinpoint the very moment his career path turned towards Anfield.

It was a Friday night in Scotland’s central belt in 2010. The Scottish Football League contingent of Queen’s Park’s U17s squad - effectively a second team to the Scottish Premier League cohort - had travelled to face their Stirling Albion counterparts.

Following the promotion of a teammate to the SPL squad, Robertson had been named in the starting XI in his preferred position of left-back, rather than the left-midfield role he had occupied for much of the season.

He takes up the story with Liverpoolfc.com, recalling vividly: “My dad came and watched me - mum couldn’t make it because of work.

“I scored a goal from left-back and played really well and from that I went from next step to next step for Queen’s Park and everybody started noticing me again.

“After that game I kind of bypassed the SPL team and went and played a couple of games with the U19s at the end of the season, so I was ahead of the SPL team.

“I do genuinely believe that, since then, I’ve not looked back.”

The pair spent 10 years playing alongside each other at Celtic and then Queen’s Park, but their diverging paths since that night in Stirlingshire are the perfect illustration of the countless ‘sliding doors’ moments that litter this sport.

That feeling is only enhanced by the fact that Robertson’s display against Stirling Albion came off the back of a year with Queen’s Park’s U16s team in which his performances were, by his own admission, “really bad”.

He puts that down to the disappointment of being let go by his boyhood club just a year before; called into a meeting and told that his slight, 15-year-old frame meant his dream was over. 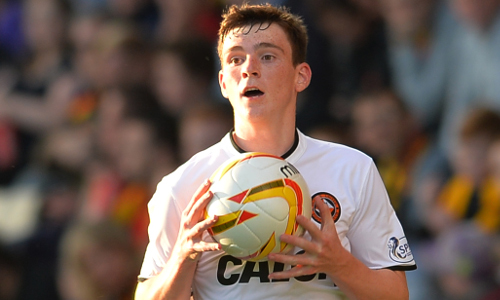 The left-back during a season-long stay at Dundee United

He explains: “I remember going in with my mum and dad and it was obviously hard for them as well because they put so much effort into me travelling up and down the country, up to Aberdeen and Inverness and places like that to watch me after working all week.

“For that to come to an end, it’s hard, and everyone you know knows you play for Celtic - telling them you’ve been released is not a nice feeling.

“The amount of boys it happens to up and down the country is incredible, as is the amount of people that don’t come back from it because it just hits them that hard.

“I know boys that got released when we were younger and they’re nowhere to be seen and that happens with probably 95 per cent of the boys that do.”

Thankfully, Robertson was surrounded by people who knew just how cruel the sport can be.

His dad’s cousin, Stephen Frail, featured for clubs such as Hearts and Tranmere Rovers during a 17-year playing career, while Scottish footballing stalwarts such as Charlie Nicholas and Jim Duffy were counted as family friends.

It was sage advice from such experienced heads that saw him turn down overtures from then-renowned youth developers Hamilton Academical in order to join amateur club Queen’s Park after leaving Celtic Park.

And, after recovering from a nightmare year with the U16s and then building on that standout turn at Stirling Albion, Robertson finally received the opportunity he had longed for - even if it came at a rather inopportune moment. 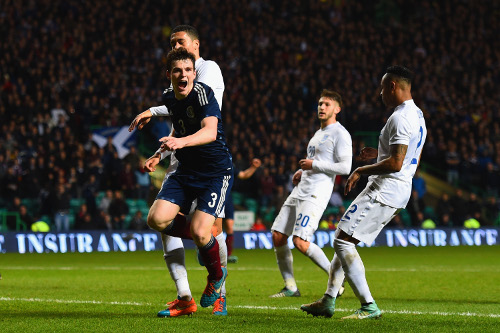 He recalls: “I remember I was in Malia with the boys and I got a call from the first-team manager, which I thought was the best thing ever at this time.

“I was a week into my holiday and he said, ‘I want you to come to pre-season tour’ - we went to Largs for four days.

“But I was supposed to go the day after we came back from Malia so I phoned my mum and dad straight away and was like, ‘I need a flight back, I can’t stay in Malia for 14 days and go to pre-season!’

“So I was just like, I’ll just have to calm it down. But obviously you don’t - it’s impossible! I came back and I was a wee bit worried about it, thinking I could be way off the pace but I was flying!

“In the runs, I was ahead, and I was like, ‘this is brilliant!’ From that, I played against Airdrie in pre-season and played quite well and after that [manager] Gardner Speirs put his faith in me and said ‘it’s your jersey, you’re going to start the season and it’s up to you to keep it’.

“Luckily, I never missed a game.”

The presence of a recently-relegated Rangers in the third tier that season certainly did Robertson no harm in terms of gaining exposure.

By the time the left-back was nearing the end of his maiden year in the first team - a role he combined with working full-time in the Hampden Park ticket office - he had already done enough to impress professional sides further up the ladder.

From there he went on to spend a season starring at Dundee United before impressing further over three years at Hull City. Now, he hopes to do more of the same for Liverpool.

Of course, somewhat typically for this story, it could easily have been different had then-Hull boss Marco Silva not been adamant that Robertson would not be allowed to join Burnley last January.

That element of fortune was not lost on the Scot the day he put pen to paper on his Reds deal.

He says: “I came over with my girlfriend and we stayed in the hotel the night before I came over for my medical and I didn’t get much sleep.

“I was thinking tomorrow is the start of the rest of our lives, it’s going to change both our lives and obviously I’ve got a wee one now so it will change his life.

“These are the clubs you want to play for when you grow up. Liverpool, so much history, the fans are amazing, playing at Anfield toward the Kop, the legends that you get to meet and playing with such a quality squad.

“I’m so fortunate that I’ve managed to do that.”

Unfortunately, despite how far he has come, it appears Robertson’s struggle isn’t fully over yet.

But now, instead of spending his days fighting to prove himself worthy of a career in professional football, the Scot's biggest worry is jibes from teammate James Milner regarding the nationality of his newly born son, Rocco.

He explains: “I’ve took a lot of abuse from James Milner in particular.

“I try not to bite but I’m obviously proud to be Scottish and I love being from Scotland and playing for Scotland and all that… but he reminds me daily that my son is English.

“At the end of the day, he’s not wrong, but if he does grow up to be a footballer then he won’t be playing for England, he’ll be playing for Scotland!”

And should Rocco ever need advice on dealing with setbacks in the pursuit of that dream, he need only look to his father.