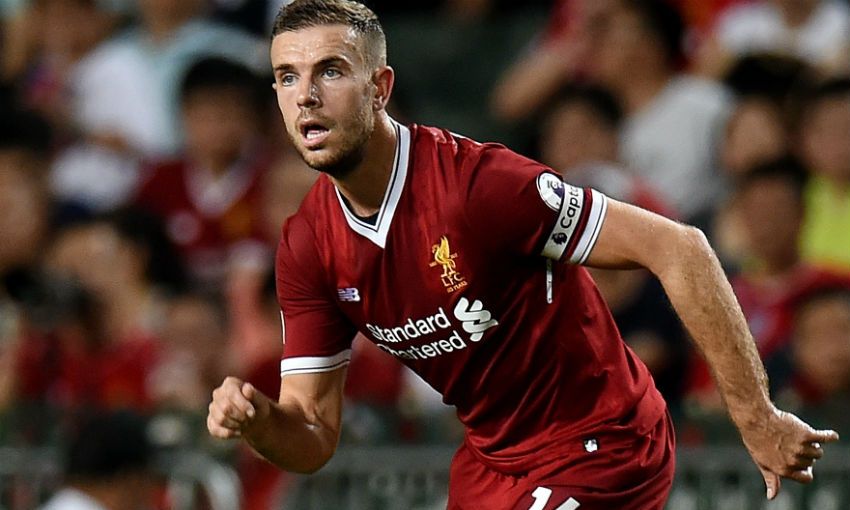 Jordan Henderson has explained why he feels he owes a debt of gratitude to Kenny Dalglish for the support and guidance he has given him in his career.

On the day Anfield unveils the Kenny Dalglish Stand for the first time, Liverpool’s captain has spoken of his appreciation for the legendary Scot’s support.

And Henderson feels the current Reds squad can take a leaf out of Dalglish’s book and carry a similar degree of belief in their own abilities.

In a special edition of ‘This is Anfield’, the midfielder says: “I can remember sitting down with Kenny and talking to him for the first time and thinking how normal he was, despite being one of the biggest names in football, let alone Liverpool. Like everyone else in the game, I was aware of his achievements and how much respect that he carries. But it was only when I was in his company that I realised what a special person he is. He made me and my family feel at ease – like we were the important ones in the room and not him.

“He has an aura but he uses it for the good of those around him rather than himself. I discovered that after signing and my Liverpool career started. He always had your back – publicly and privately. He would stand up for you when others were critical and would always be in your corner. He wanted the best for you personally but also for the team. That sort of backing was massive for me and I appreciate it to this day.

“As a manager Kenny was brilliant for me. He put me in the team, gave me the time and the environment in which to develop, and provided me with the kind of guidance that only someone of his experience could. I even have a constant reminder of what he did for me in the form of the League Cup winner’s medal that I won against Cardiff City in 2012. Speak to the other lads who signed for him and they’ll say exactly the same.

“Even now, he still has positive words for me and the rest of the team whenever I see him and he is always willing to give me the benefit of his knowledge. He’s just as defensive of all of us – always positive – and always fighting our corner. Typically, Kenny is always low-key and humble when I see him now, either at games or club events, and he never acts like someone with his record, career and achievements could and be forgiven for.

“He may no longer be manager but his support for Liverpool and his desire for us to do well remain as strong as ever, and it goes without saying that he will be willing us to win today just as he always does.

“For that to happen, we have got to believe in ourselves as much as he believes in us. There has been a lot of criticism of our form from outside of the club and as players we accept that because if you are fortunate enough to play for a club like Liverpool you have to deliver good results week in, week out, and that hasn’t happened enough for our liking of late.

“Performances have been good, though, and that shouldn’t be forgotten. The displays we put in away to Spartak Moscow and at Newcastle United before the international break were more than good enough for us to have won both games with something to spare and we have to take that knowledge into today’s fixture.

“Belief isn’t an issue for this team and nor should it ever be for players wearing our shirt. Everyone in our dressing room knows our qualities and what we can achieve this season.”

Pick up your commemorative Kenny Dalglish edition of ‘This is Anfield’ featuring tributes from Jürgen Klopp and Jordan Henderson, as well as an exclusive interview with the man himself, at the stadium today or online by clicking here.