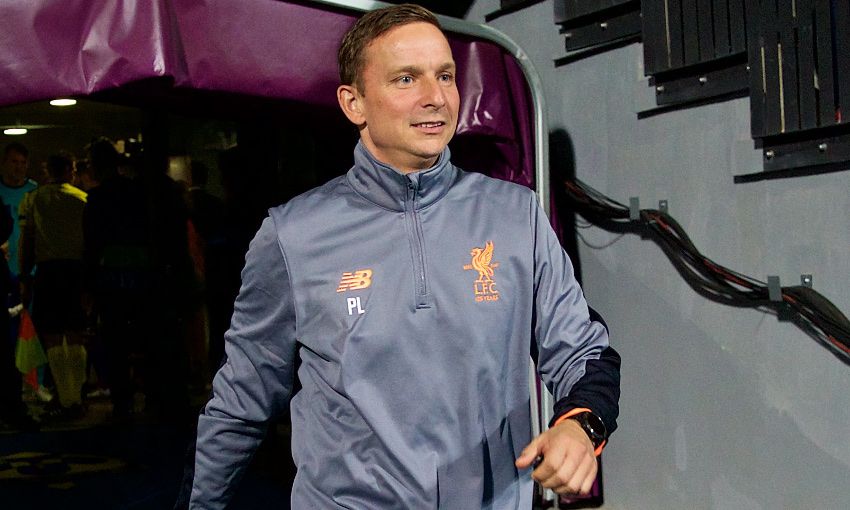 Jürgen Klopp: AOC has everything to be a big success here

The Reds endured a frustrating first half up against David Wagner's side at Anfield on Saturday, struggling to unlock a deep-lying opposition defence and seeing a Mohamed Salah penalty saved.

However, the hosts were much improved going forward after the break, and claimed a deserved win through goals from Daniel Sturridge, Roberto Firmino and Georginio Wijnaldum.

Lijnders believes the victory owed much to the players taking on instructions regarding their movement in the final third prior to the second period.

"We are always searching for unpredictability in our positional game - first half, that didn't exist," he told Liverpoolfc.com.

"Unpredictability only starts when there are movements around the ball, so the player on the ball has more opportunities to make decisions.

"The speed of movement then, the type of movement around the ball, that was basically the biggest difference between the first half and the second half.

"The moment that doesn't exist, those types of moves and options around the ball, then you see that talent doesn't flourish.

"That was the biggest difference, you saw it from the first minute in the second half.

"That's why it's nice that the game is two parts and that there's 15 minutes in between so you can correct it! That's what Jürgen and the staff did."

LFCTV GO: Watch highlights of the Reds' win over Huddersfield

One aspect of the players' approach that Lijnders and his fellow coaches found frustrating during the first half was an apparent commitment to patient build-up.

Although the Dutchman acknowledged that a slower sequence of passes can sometimes be appropriate, he underlined the value of moving vertically up the pitch in the majority of situations.

He added: "That was a problem: the patience!

"You want to go forward, you want to move the ball into situations where certain types of players touch the ball and get movements around them and can become unpredictable and their talent, the detail of the player, is much more [visible] and it brings colour to our play.

"What was happening was that we were going [sideways] without opening up, without speeding up. The moment a player on the ball has the option to go forward then there's a pathway and you can keep creating.

"Then, sometimes, it's a nice thing to go backwards! Patience is important in the right moments because not each attack is the same but if you can go vertical and get our players on the ball then that should always be the main idea.

"Only there does counter-pressing become interesting, only there can a bad pass be a good pass."

In beating the Terriers, Liverpool proved they were suffering no mental hangover from a 4-1 defeat at Tottenham Hotspur the previous week.

On the technical side, Lijnders emphasised the importance of taking collective responsibility for the defensive errors seen in that game, and promised there will be few repeats in future.

"I believe that before each individual mistake there's a collective problem; there's a group of players who don't act in a coordinated way," he said.

"That's important to analyse after Tottenham, I think. Only when the individual is forced to react on something that's not [right] then the problems start.

"Of course, it was really important [to win against Huddersfield]. The last two years, there were not many games where the opposition outplayed us, outpassed us, outpressed us, but if it happens you have to take it.

"Tottenham were the better team. But it's interesting because you have a player then the same player with confidence or without confidence, that's a different type of player."