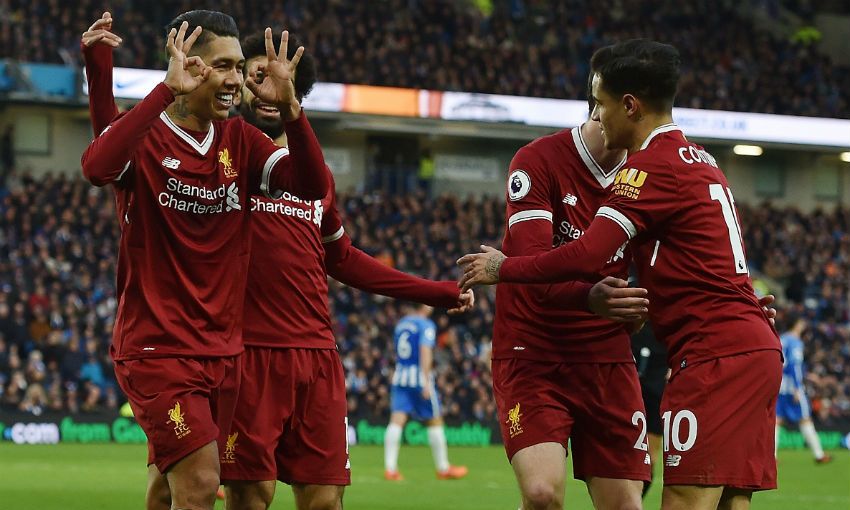 Liverpool extended their unbeaten sequence to eight matches as they recorded an emphatic 5-1 Premier League win over Brighton & Hove Albion at the Amex Stadium.

Two goals inside 90 seconds gave the Reds the advantage midway through the first half and left the Seagulls stunned. Emre Can headed them in front on the half hour, powerfully converting from Philippe Coutinho’s corner, before Roberto Firmino finished off a pacey counter-attack by slotting in at the back post.

Firmino netted again shortly after the re-start, 14 seconds after a stunning save at point-blank range from Simon Mignolet had denied Glenn Murray.

The Brighton striker did get on the scoresheet on 51 minutes when he converted a penalty, but Coutinho’s audacious free-kick restored the three-goal lead before Lewis Dunk headed a shot from the Brazilian into his own net at the death.

Joe Gomez (virus) and Joel Matip (adductor) were ruled out, Alberto Moreno was rested while Ragnar Klavan was only deemed fit for the bench after illness.

There was a frenetic feel to the opening exchanges of the contest as Liverpool set about looking to extend their seven-match unbeaten run into December against a side who had only conceded 14 times in as many league outings heading into the latest round of fixtures.

Just 45 seconds had elapsed when Salah had an effort blocked on the edge of the box – and the winger forced a close-range save from Matthew Ryan shortly after as he attempted to steer a Coutinho through ball into the net.

From the resulting corner, Firmino bulleted a header over the crossbar, shortly before nudging an Alexander-Arnold centre an inch wide of the post with his shoulder.

Brighton were content to sit deep and attempt to stifle their opponents; however, Murray spurned a chance to open the scoring for the hosts when he scooped Gaetan Bong’s low cross wide after the Reds failed to cut out the delivery.

But on the half-hour, Liverpool’s dominance of the ball finally paid off as they netted from a corner.

Coutinho hoisted the ball into the middle, where Can rose among a crowd of bodies to plant a header into net from eight yards out.

And just 79 seconds later, the visitors had a second when they devastated Brighton with a speedy counter-attack that resulted in Salah feeding the ball left to Coutinho, whose first-time centre along the ground was swept in at the back post by Firmino.

Just three minutes of play had passed when Liverpool extended their advantage in the second period – but only after a stunning stop from Mignolet when Murray met a cross unmarked inside the six-yard box, but was foiled by outstanding reflexes from the goalkeeper.

The Reds sprung forward quickly and just 14 seconds later, the ball was in the net as Salah slipped in Firmino, who dispatched beyond Ryan first time.

Murray did notch on 51 minutes to reduce the visitors’ lead when Jordan Henderson was deemed to have pushed Shane Duffy at a corner, allowing the home forward to convert from the spot.

It stirred Brighton as they looked to stage a dramatic comeback, though Salah had an opportunity to grab a fourth but was thwarted by Ryan after Firmino had regained possession.

At the other end, Murray hooked a half-volley a matter of inches wide of goal from Duffy’s knockdown at a free-kick.

With the game edging towards its conclusion, Alex Oxlade-Chamberlain replaced Salah, while Alexander-Arnold produced a fantastic challenge to prevent Jose Izquierdo getting a clear strike at Mignolet.

Then, with 87 minutes gone, Coutinho made it 4-1 when he superbly rolled a free-kick on the edge of the area under the Brighton wall and into the net, effectively sealing the points.

And two minutes later, the No.10 motored forward and struck goalwards, with Dunk inadvertently heading it beyond Ryan and ensuring the Reds recorded a resounding win.