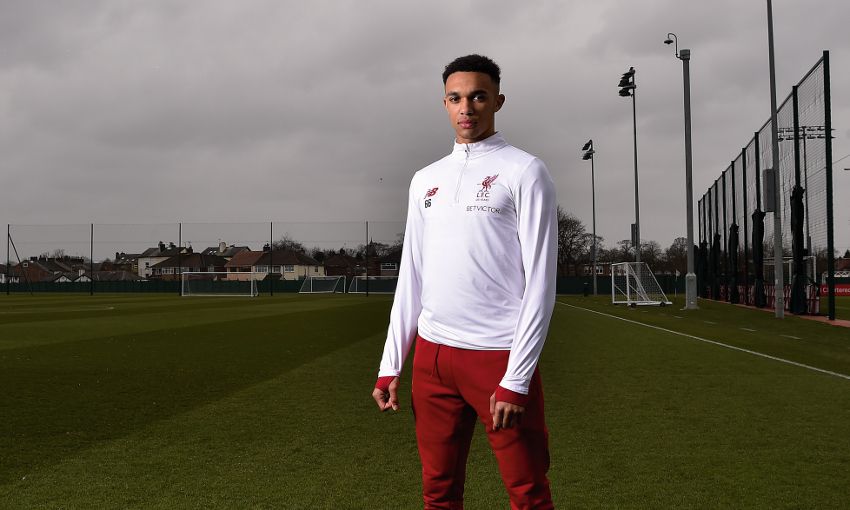 Henderson: We have a responsibility to reward your defiance

"You're playing against a different strategy. You've got to be careful of their attack and how they're going to defend. There are different positions and different pieces."

Trent Alexander-Arnold is not talking about football.

“When I was growing up, me and my brothers always played chess,” recalls the Liverpool No.66, smiling fondly, at the beginning of an exclusive interview with Liverpoolfc.com.

“That came through my parents because they were quite strict on education and it’s educational. There was chess at school and I used to get involved in that. I always played it growing up.”

And nothing has changed.

These days, though, the Liverpool defender’s opposition is provided by teammate Ben Woodburn. The hours they share travelling with the first team are whiled away by tactical battles on a virtual chess board – or, in the case of a pre-season trip last summer, a real one.

“It’s very competitive,” asserts Trent, who has received a playful telling-off from his rival when taking too long in considering his moves. That thoughtfulness is matched by diplomacy. “He’d kill me if I said I was better. It’s quite even, to be fair – we both get the best out of each other.” 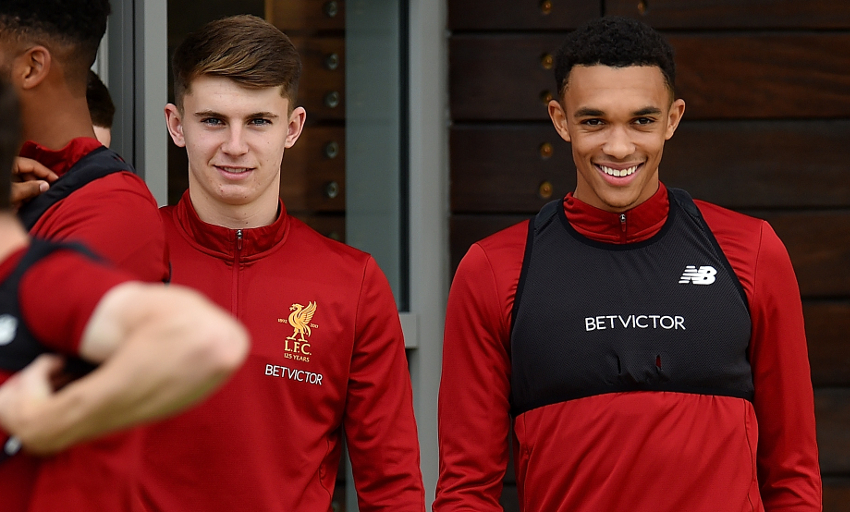 You know the Alexander-Arnold story, of course.

He is the local lad living the Liverpool dream, the Scouser who once stood at the walls of Melwood hoping for a glimpse of the heroes inside the training ground and is now one of them, the swashbuckling right full-back with the world at his feet.

“The sky is the limit, I guess,” he nods. “But obviously there is still a really long way to go.” Yet, it has already been quite a journey.

Few knew the name Alexander-Arnold at the beginning of August 2015. But a dizzying, confusing chain of events was about to permanently change the course of Trent’s life.

Then 16, the budding Academy talent was in London for a pre-season tournament with Liverpool U18s on the same weekend that the senior side were concluding their preparations for the new campaign with a friendly double-header in Helsinki and Swindon.

A Friday morning meeting with Manchester United consumed Trent’s concentration. “I can’t wait to play,” he thought. But he wasn’t selected. “I was gutted.”

Then the rationalisation began. “I would never question the manager, it was his decision and I thought he might be saving me because we had a game in the afternoon as well.”

In fact, it was the first-team boss, Brendan Rodgers, who required the services of a player that had caught his eye during a practice match at Melwood the previous season.

“After the United game, Alex Inglethorpe came over to me and said, ‘I’ve had a call from Brendan saying he might need you for Swindon. I think he needs you to play so make sure you’re ready. It’s still not 100 per cent.’

“So I played the afternoon game not knowing whether I was going or not. I played at right-back to try to become as familiar as possible, because I think it was my third or fourth game as a right-back. I didn’t really know the position. I remember Alex talking me through the whole game – he made sure I was ready for if the chance came.”

Confirmation of his unexpected call-up soon arrived and as messages of good luck streamed in from teammates, Inglethorpe personally drove Alexander-Arnold back up to Merseyside.

“We trained at Melwood on the Saturday morning and flew down to Swindon on the Saturday night, stayed over and played on the Sunday,” remembers the teenager, still slightly bewildered by the chronology two-and-a-half years on.

“I played around 60 minutes and I was made up. I was grateful for the chance and looking back, it was a really big opportunity for me.” 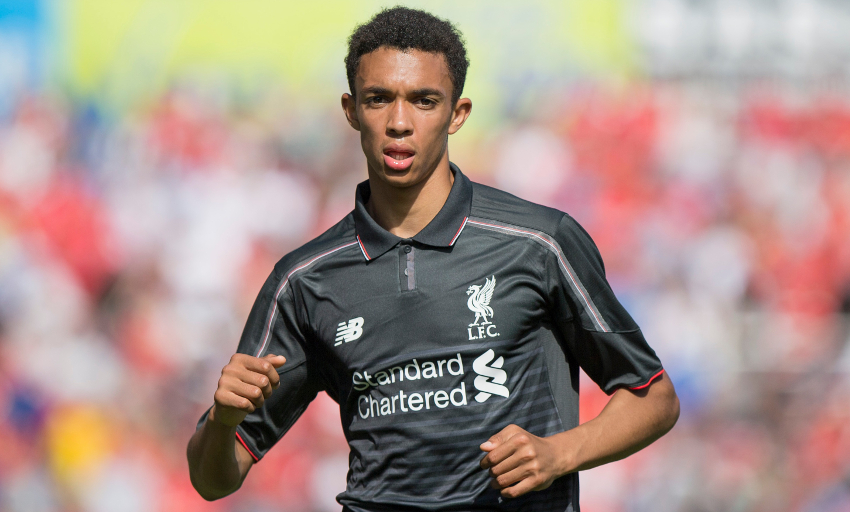 The Alexander-Arnold project was clearly progressing in encouraging fashion.

But it was the prescience and persistence of both Inglethorpe and then-U18s manager Neil Critchley which accelerated that process – perhaps more than either could have hoped.

Despite his return to a midfield berth for the U18s following that surprise outing at Swindon, educating Trent on the minutiae of right-back responsibilities was high on the agenda at the Academy.

He and Critchley studied hours of footage to help hone the young man’s game, with Philipp Lahm and Dani Alves held up as shining examples of defensive and offensive play respectively.

“And it wasn’t just right-backs. It was defenders in general – their body movements, when to drop and push forward, all kinds of things,” notes the England youth international.

Midway through the season the trio reached an agreement. Without it, you may never have read this article.

Alexander-Arnold explains: “I slowly got eased into right-back. That’s when, as a collective – me, Critch and Alex – sat down and discussed future plans.

“We came to the point that right-back was probably going to be the easiest route into the first team for me. Joe [Gomez] was still badly injured, Flanno was injured and it was just Clyney at the club. We looked at it and thought, ‘there is Clyney and probably just one U23s right-back in your way now’.

“I thought, ‘it’s probably not the best idea’.

“I was getting used to and enjoying the right-back role, it was something I wanted to do. You can’t really waste time. At 17, to hear you are one or two spots away from being in and around the first team gives you motivation.”

Not that Trent was the finished article, as he openly confesses. “I used to spit my dummy out a bit,” is his admission. “If I was losing, I’d start to get tired and kick out and foul.”

Fortunately, the perfect mentor stood on the sidelines.

Inglethorpe had no patience for sullen behaviour. What he did have, however, was knowledge of the future. Specifically, how Alexander-Arnold needed to evolve if he was ever going to survive at senior level.

It’s fair to say the player himself did not welcome the approach at the time. “He was always nit-picking at everything”. But with the benefit of hindsight, his appreciation for Liverpool’s Academy director is boundless.

“That pressure in training every single day built me into the player I am today. That was a huge thing for me. He moulded me into a man from a boy – I can only thank him for that.

“He kept going at me until I came up to Melwood. Even in the last session I had with Alex, he was still going at me and making sure I was ready.

“There were times when I’d want to get my anger out and kick balls away and he wouldn’t let me, he’d make me run after them. He moulded me into the man I am.” The pair remain in regular contact. 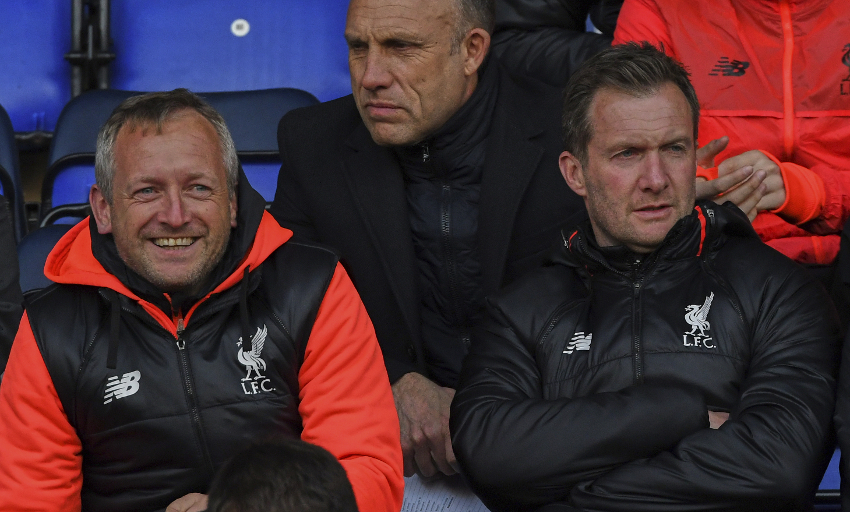 Where the staff at the Academy and, more recently, Melwood have provided Trent with the necessary professional support network, away from the game he continues to lean on a close-knit family.

Older brother Tyler acts as the 19-year-old’s agent and chief cheerleader. Younger brother Marcel loves to watch the defender in action, too. “Both of them are so supportive in their different ways.”

And then there’s mum Diane.

Learn more about her and you quickly understand how this well-spoken, accomplished young man was formed; a famous footballer still deeply rooted in his local community; a person and a player to admire.

During her son’s spell at the Academy, she would take Christmas presents to the staff in Kirkby, tokens of appreciation for the coaches, secretaries and security guards. “She thought they deserved it.”

Her generosity has transferred to Melwood, too. When Diane told Trent of her intention to dish out doughnuts to staff at the training ground, he did not take her seriously.

“I thought it might have stopped,” he says, bashfully. But he completes the story with pride. “I was thinking ‘she won’t’ – but she did. We were training in the afternoon and she came in that morning; I was getting texts from the staff saying ‘thanks for the doughnuts’! It was a nice gesture.

“I have to say thanks for everything she has ever done for me, so many things. She supports me every single minute. She has been with me every single step of the way. Without her and the family all around me, I definitely wouldn’t be where I am.” 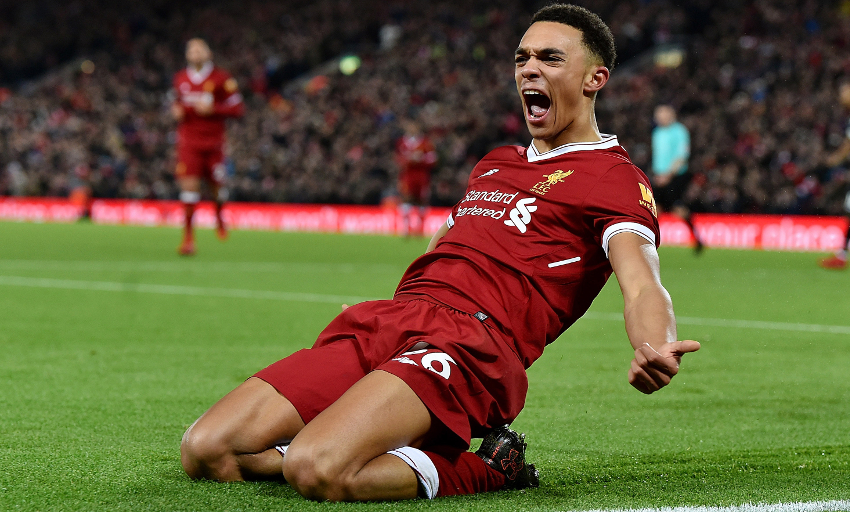 Where he is: 34 Liverpool appearances, three goals, part of the first Reds team to reach the Champions League quarter-finals since 2009.

“The reason he is playing is not because he is Trent or a Scouser, it’s only because of his quality,” said Jürgen Klopp this month. All true, and yet his place of birth does make a difference.

“There is a Scouse mentality,” Alexander-Arnold insists.

“There is a bit of aggression in there, controlled anger I would say. It’s an aggressive way of playing. It’s the hunger to win, you’re brought up to win as a Scouser – you want to win everything. I think that might be to do with Everton and growing up playing against them.”

Memories of Monday mornings at school after a Merseyside derby are fresh and vivid for the teenager – half the classroom joyous, the other half despondent.

“That’s what it’s like growing up in Liverpool.” Luckily for him, the Reds were often victorious during his childhood. But sometimes they weren’t. “Horrible,” he flinches.

“That will never leave me, that hunger and desire to always beat Everton, and the likes of Manchester United and Manchester City – the ones where it feels a little bit better when you come out on top.

“There is that Scouse mentality; it’s hard to put a finger on it but if you look at the past you could see it in Carragher and Gerrard. They would run through a brick wall to get the ball for you, they’d tackle anything that was in their way, they’d get past any obstacle that was in their way to win a game. That’s the way I look at football as well: the hunger and will to win at all costs.

“The dream and the plan for me is to be as successful as possible at this club, and bring as much silverware as possible – and hopefully become the best you can be.”

The sky is the limit, I guess.