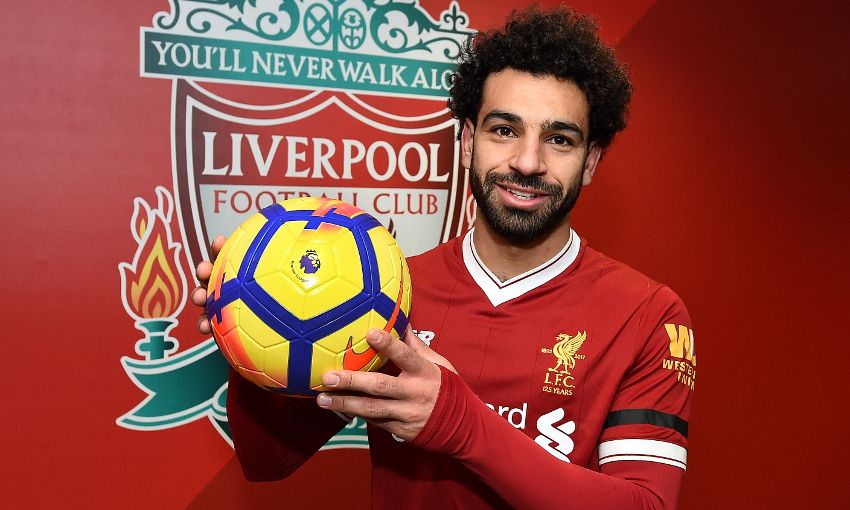 Mohamed Salah's match ball was furnished with the signatures of his teammates on Saturday, including a simple tribute from the Liverpool captain: 'superstar'.

The Egyptian shrugged off the snowy conditions to net four goals and create the other for Roberto Firmino, in an emphatic 5-0 victory over Watford at Anfield.

His haul increased Salah’s season tally to 36 in just 41 matches since he signed from AS Roma last summer – the most any player has achieved in a debut campaign for the Reds in history.

The No.11 gleefully grabbed the match ball at full-time and his memento was enhanced by the colleagues who watch his exploits on the pitch with awe.

Expanding on Salah’s influence, the skipper continued: “For a start, it’s the confidence. You have someone like Mo who does the hardest part of the game, which is putting the ball in the back of the net.

“Then, as a team, if we work as hard as we possibly can, then Mo – or even Sadio and Bobby – are going to finish it in the final third. We had that with Luis [Suarez].

“You know when you are walking out there are so many goals out there for you. It’s just about defending well as a team because you know you will create chances.”

Suarez was the previous man to score four in a single match for Liverpool, doing so against Norwich City at Anfield in December 2013.

But Henderson refused to make comparisons between the two forwards, instead focusing solely on the ‘absolutely unbelievable’ efforts of Salah this term.

“They are both fantastic players in their own right and you can’t compare them. They are different players,” said the England international.

“I know they score a lot of goals and both work hard off the ball but it is very difficult to make that comparison. They are both so good in their own right.

“Which was the best performance? I’ll have to watch the goals back! I remember Luis had a couple of nutmegs and that 40-yarder… look, they are just both fantastic players.

“Luis moved on to Barcelona and is doing fantastically well. He is a fantastic player who I was privileged to play with.

“But Mo this season has been unbelievable. Absolutely unbelievable. He is doing it every week, without fail. He’s a great lad in the dressing room and to have around the place. He is a big plus to have in the team.”