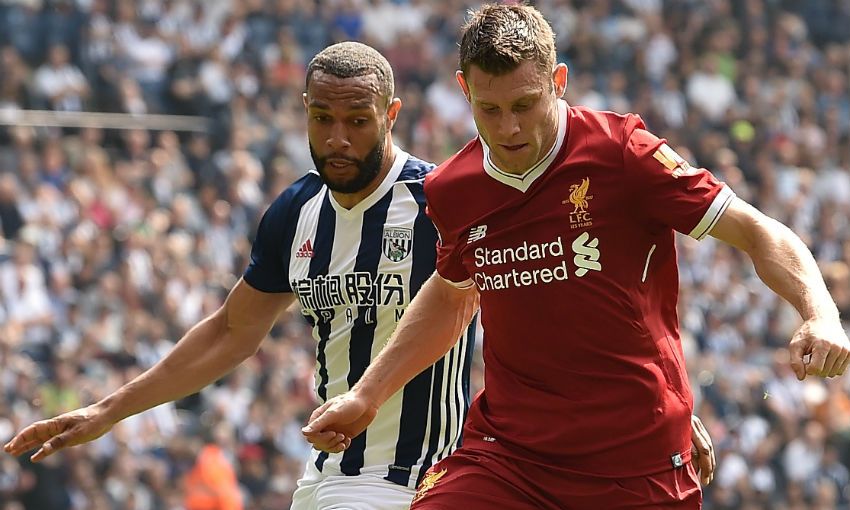 Liverpool relinquished a two-goal lead as they were held to a 2-2 draw by West Bromwich Albion at the Hawthorns on Saturday.

Danny Ings netted the opener with just four minutes gone when he turned in his first goal since October 2015 from Sadio Mane’s stellar assist.

Mohamed Salah’s expert finish on 72 minutes – a strike that equalled the Premier League record for most number of goals in a 38-game season – looked to have put the Reds on course for victory.

But West Brom reduced the arrears when Jake Livermore turned in from close range after Loris Karius had blocked Jonny Evans’ initial snap-shot at a corner.

And Salomon Rondon completed the comeback when he crashed in a header from a free-kick to ensure the points were shared in the Midlands.

Liverpool began the game in search of three points that would put them on the cusp of qualification for next season’s Champions League.

And they were set on their way towards achieving that target inside four minutes with a goal that meant much to many within the Reds camp – most of all the scorer.

Milner returned the ball to Mane at a short corner, who deftly glided beyond Jay Rodriguez before crossing into the middle, where Ings arrived on cue to sweep in after a touch from Georginio Wijnaldum.

It was the striker’s first goal since October 2015 after injury issues – and his reaction laid bare the mixture of elation and relief coursing through him.

A second could have followed just moments later, but Livermore produced a last-ditch block to deflect a goal-bound Salah effort over the bar.

Ings then nodded over from a Milner centre, though the Baggies had began to pose some questions of the visiting defence by this point.

A succession of corners didn’t yield a leveller for the hosts, though James McClean’s side-footer right across the face of goal caused a moment of panic for Liverpool, with Rodriguez an inch away from turning it over the line.

At the other end, Ings went close to a second after the ball ricocheted to him eight yards out, but he was denied by a save from Ben Foster at point-blank range.

West Brom toiled in search of an equaliser in the early stages of the second stanza – and Matt Phillips’ run to the by-line and subsequent pull-back needed to be dealt with by Virgil van Dijk.

On 65 minutes, Ings was withdrawn to a lively ovation from the visiting supporters’ section. Mane also made way as Roberto Firmino and Alex Oxlade-Chamberlain entered the action.

And it was the latter who laid on Liverpool’s crucial second when he pounced on possession and slid a ball into the path of Salah. The Egyptian took a touch before gently lifting it over Foster and into the back of the net.

Livermore reduced the Reds’ advantage to a one-goal one soon after when he scooped in after Karius had parried Evans’ effort at a corner.

The visiting goalkeeper then needed to be quick off his line to thwart Rondon, while he also gathered a glancing header from Rodriguez.

However, the home team rescued a point when Rondon powered home an 88th-minute header to level up the scoreline and leave Liverpool frustrated.