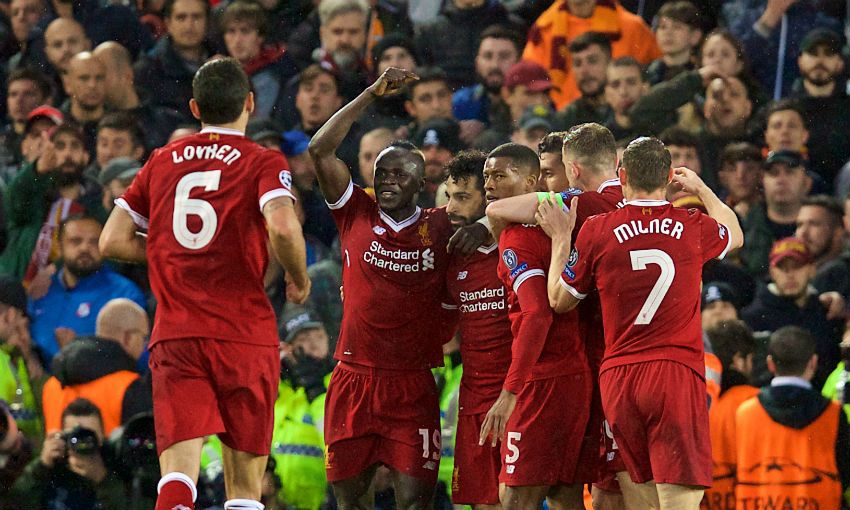 Liverpool will take a 5-2 aggregate lead to Italy for the second leg of their Champions League semi-final after a thrilling win over AS Roma at Anfield on Tuesday night.

Mohamed Salah and Roberto Firmino both scored twice, while Sadio Mane was also on the mark for the Reds.

“'I don’t know what it is but I love it,' read the banner on The Kop. It couldn’t be any more apt. Nobody knows what this is, this incredible, unstoppable train. Mohamed Salah is leading Liverpool’s latest European charge in the most fabulous, thrilling fashion. Whatever this is, Reds fans love it. It’s ironic that the song the Kop serenades its Egyptian king with is to the tune of ‘Sit Down’. Because from the moment he arrived on Merseyside, all Salah has done is get people on their feet. On their feet and applauding. On their feet and applauding. On their feet and believing. There are hot streaks and then there are hot streaks. This shows no sign of slowing down. Salah is threatening to take Liverpool all the way to glory. He’s already got them with a foot-and-a-half in the Champions League final after yet another extraordinary performance on yet another extraordinary Anfield night. Entertainment? You get your money’s worth with Liverpool, that’s for sure.

Jürgen Klopp's side only have one foot rather than two in next month's Champions League final in Kiev after late goals from Edin Dzeko and Diego Perotti burst Kopites' bubble of delirium. But this wasn't a night for regrets after Liverpool produced one of the most sensational performances in the club's illustrious European history. How can you criticise a team who delivered such a spellbinding attacking masterclass when the stakes were so high? Klopp's 150th match in charge was marked in style. Here was the fruits of his labour. His juggernaut he has assembled steamrollered the shell-shocked Serie A outfit. There were heroes all over the field. Klopp had warned Salah to expect a kicking against his old former club but they couldn't lay a glove on him. His fairytale season enjoyed its finest hour as he struck a majestic first-half double to take his tally to 43 goals – just four short of Ian Rush's club record. On current form there is no better player on the planet. The dazzling Egyptian winger showed no mercy to old friends as he tormented Roma's backline. The hapless Juan Jesus will be seeing him in his nightmares. Salah laid on goals for Roberto Firmino and Sadio Mane in the second half before the outstanding Firmino headed home his second of the night. The most potent attacking trio in Europe now boast 88 goals between this term. Despite the late twist, this is still a magnificent result for Liverpool, who will fancy their chances of doing some more damage in the Eternal City.

Liverpool, a hurricane of movement and attacking mastery, are 90-odd minutes away from flying to Kyiv for the chance at a sixth European Cup.
Roma had no obstructions, no clue and no say in the first leg of the Champions League semi-final that they were losing 5-0 on Merseyside, before they stopped playing dead to score twice late on. Mohamed Salah, a force that manages to mix the explosive and the elegant with a consistency that bankrupts vocabularies of superlatives. Forty three goals. Three have come against Manchester City, the same figure against Tottenham, two against Arsenal, that number here against his former club Roma and one against Chelsea. On the main stage, when Liverpool most need him, he does the business and spreads his arms out to ask his people if they expected any less. Forty three goals. They do not expect any less. It is about Roberto Firmino, a relentless all-rounder who tackles more than most midfielders and has 27 goals in the campaign - 11 of them in Europe. A player Klopp may as well have concocted in a science lab given his fighting football DNA. It is about Sadio Mane, who tries and grafts and scores and never hides whether things are going his way or not. Whether he is the right forward, on the left, through the middle, or deeper as a playmaker.

It is no secret this Liverpool team play in surges, moments when the day seems to turn a shade of deep red and when the front three become a whirl of malevolent action. But this was something new. Liverpool and Salah did not just accelerate away from Roma, they eviscerated them, almost but not quite killing a semi-final that remains, somehow, in the balance. Liverpool were relentless in those periods, shaking and ragging Roma in their jaws like a terrier with an old leather slipper. Of five Liverpool goals in the space of 35 minutes Salah scored two and provided three assists for Roberto Firmino, twice, and Sadio Mané. Salah was that rare thing, an athlete at the top of his profession finding new heights, new levels. There may be a more breathtakingly brilliant attacking performance in Europe this season but, given the game and the stage, there has not been one yet. In the event the Salah Spring just keeps rolling, with 22 goals and nine assists in his past 19 starts since Boxing Day. More significant than the numbers is the spectacle, the basic joy in Salah’s free-running interpretation of the inside-forward role, a combination of preternatural quick feet, a computer of a creative brain and the rare ability in modern football simply to make the game up in front of him. Salah was too much for Roma as he has been for so many others this season. Defensive jitters may have let Roma back in towards the end but Liverpool will travel to Rome with confidence. Jürgen Klopp has spoken about the need for everyone to join “the train”, for the whole team to push it along together. The Olympic Stadium will be a moment to yank the throttle hard once again, to keep that machine driving on right to the end.

There is surely no way back after another deafening, devastating Mo Salah night at Anfield. Salah was the hero, the genius carrying Liverpool towards more European glory after his remarkable virtuoso display put them within touching distance of the final. And yet amid the mayhem and noise, Salah was the only one in the place not celebrating as his team mates mobbed him and the roof came off the place. There can be no greater arena than Anfield on a European night and the all conquering hero is simply unstoppable as his brace takes him to 43 goals in 47 games in all competitions this season. Salah refused to celebrate against his former club while Roma must rue the day they let him go because his £35m move to Liverpool last summer now looks the bargain of the century. Roma’s two late goals at least gives the Italians some hope and Liverpool a degree of doubt but it is also impossible to imagine Salah not scoring in the second leg next week. You could sense the expectation inside Anfield, the buzz and the noise as the goals went in because Klopp’s men believe this is their time. But above everything else, they also have the best player in Europe right now with Salah because his goals, pace and individual brilliance destroys opponents. It was an incredible night because, just when you thought it could not get any louder than against Manchester City in the last round, it was another occasion to savour.