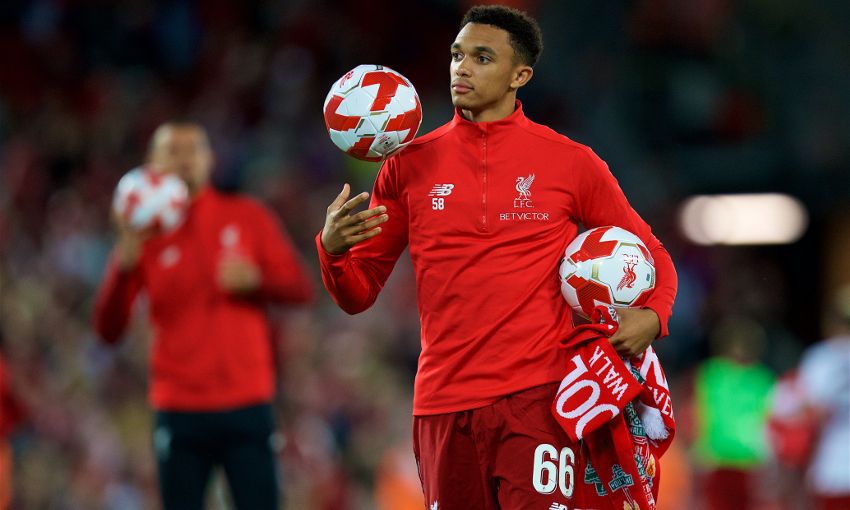 After another hour of game time on Tuesday night, Trent Alexander-Arnold feels he is ready to start against West Ham United if called upon.

The No.66 made his first appearance of pre-season last weekend as a substitute in the friendly with Napoli and followed that up with a start at Anfield as Torino were beaten 3-1.

Jürgen Klopp allowed the defender to return from his post-World Cup holiday early, based on a combination of factors including his age and number of minutes in Russia, though Alexander-Arnold is still playing catch-up with some of his teammates.

But the 19-year-old believes he is fresh enough to be in the Reds’ starting XI when the Premier League season begins on Sunday.

“I feel I have had enough minutes,” Alexander-Arnold told Liverpoolfc.com immediately after goals from Roberto Firmino, Georginio Wijnaldum and Daniel Sturridge sealed the win over Torino.

“Obviously, I didn’t have too much of a rest, so I never lost too much fitness. So, to come back, be straight in and get the 60 minutes, it’s very good. If the manager thinks I’m ready and wants me to play, I think possibly I’ll be ready to play.

“It’s always good to be back. It’s good to see the fans again and put up a performance, and hopefully we will get the win again on Sunday.”

LFCTV GO: Highlights of the 3-1 win

His breakthrough 2017-18 season ended with the sharp disappointment of losing the Champions League final, and England then fell short in the World Cup semi-finals.

But Alexander-Arnold intends to use the confidence and knowledge gained from being part of the biggest international tournament while still a teenager.

“So, I think it gives me a lot of motivation to come back and work harder and hopefully improve myself and keep moving forward.”

During Alexander-Arnold’s absence in the opening weeks of pre-season, the next batch of Academy hopefuls set about staking their first-team claim.

The likes of Rafael Camacho, Kamil Grabara, Curtis Jones, Caoimhin Kelleher and Nathaniel Phillips have grasped their chances in a manner reminiscent of the Scouser himself.

“They know themselves that it is difficult and it’s going to take a lot of hard work,” he said.

“It’s going to take a lot of patience because it doesn’t happen straight away. But I think the lads that have come in and showed themselves this pre-season have been exceptional.

“They have really done the Academy proud on and off the pitch the way they have conducted themselves.

“When I came back, all I heard was good things about them from the senior lads. So, the Academy have really shown again that they are doing something right.”