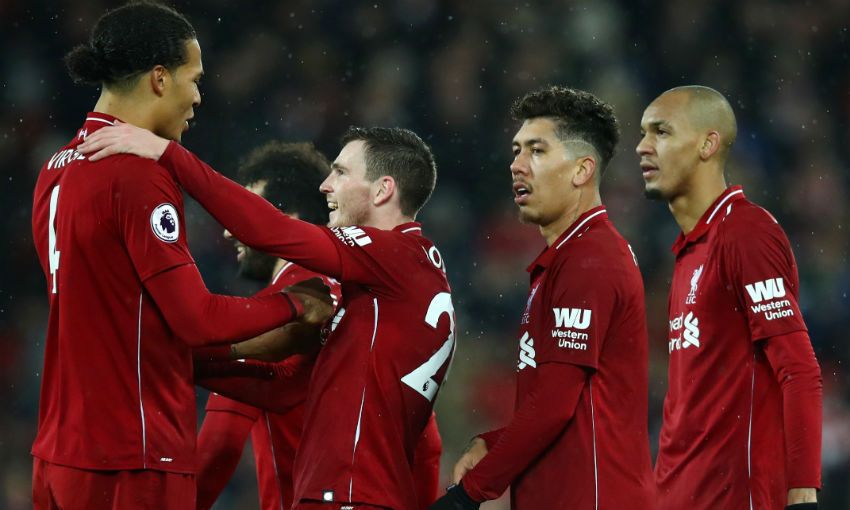 Andy Robertson can speak with more authority than most with regard to Virgil van Dijk’s impact at Liverpool.

After all, the No.26 has spent much of the last 12 months playing in close proximity to the Dutchman, whose spot on the left side of the Reds’ central defence means he and the left-back are required to have an acute understanding of each other’s games.

Van Dijk’s form since arriving at Anfield at the start of 2018 has been largely imperious, with his latest in a long line of impressive individual displays coming in Friday’s 2-0 win over Wolverhampton Wanderers.

Liverpool emerged from a testing evening at Molineux with a victory that extended their lead at the top of the Premier League to four points thanks to Mohamed Salah’s first-half strike and Van Dijk’s second goal for the club.

And Robertson spoke about the No.4 in glowing terms post-match.

“I'm getting bored speaking about how good he is!” he said.

“No, I'm only joking. He was fantastic. We knew when we saw [Adama] Traore up top that he has got great pace. His pace and direction are a big threat and big Virgil did so well with him. We knew on the counter-attack they were dangerous.

“I'm sure he will be disappointed he has not scored more goals but it was a clean sheet and his first Premier League goal - pretty much a perfect day for him.

“He's been brilliant [since joining Liverpool]. I've had the pleasure of working alongside him for the majority of time on the left-hand side of the defence. He's just a great lad to have next to you - I'm not sure he will say the same about me!

“I think we have had a good relationship, we work together. The whole back four does, whoever plays, his impact on the club has been good. I look forward to it continuing.”

Robertson went on to explain how the array of ‘leaders’ throughout Jürgen Klopp’s team is helping their bid for the top-flight title.

“We have a fantastic captain in Hendo. This [Wolves] was his 300th game for the club and that's a great achievement,” the 24-year-old, who captains Scotland, continued.

“We've got Milly behind him as well and he's a top pro, everyone looks up to him. Virgil is captain for his country so there are plenty of leaders on the park.

“I'm including Dejan [Lovren] in that as well. The more leaders we have got on the park the better as far as I'm concerned. There were a couple of arguments out there against Wolves - a couple of things that needed to be said and they were said.

“We all have the attitude that if someone says something to you, you have to take it on the chin. If you don't agree with it, you deal with it at full-time or half-time and speak to one another.

“We have spoken together as a team. We do discuss things [and] have said that's it's about having that honesty between us.

“I think that's something the lads have done really well since the start of the season. It shows the respect between us.”