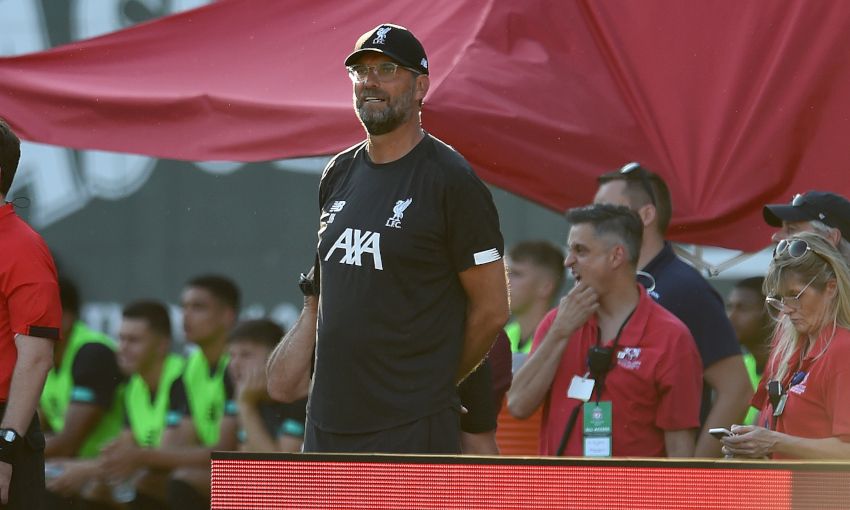 Jürgen Klopp feels Liverpool will benefit from lessons learned in their early pre-season preparations following the 2-1 defeat by Sevilla at Fenway Park on Sunday night.

The Reds suffered a second loss in as many games during their tour of the United States so far after Alejandro Pozo struck in the 90th minute in Boston.

Earlier, Divock Origi had cancelled out an opener from Nolito in the first half and Sevilla were reduced to 10 men when Joris Gnagnon saw red for a rash challenge on Yasser Larouci with a quarter of an hour left to play.

Afterwards, Klopp addressed the media at Fenway Park in his post-match press conference and explained that although disappointed by the reversal, he believes it will ultimately prove a useful reference point in planning for the new campaign.

Read on for a summary of what he had to say…

I would love pretty early in the season that you write stories about the game without my headlines because whatever I say about it will be the headline of the game. We can talk about football, which was not too good. We could have done much better, probably, maybe, because of the circumstances and different situations. But in general, not this game, I don’t like overly hard games because I think a challenge is there to win the ball, that’s the only reason and there are rules. I don’t want to say anything about this specific game now.

I know how much we need these games, I know how difficult our situation is in the moment with missing an offensive line, plus two midfielders who are very important. Bringing the young boys, it’s not fair to judge them in these circumstances, a lot of them trained for the first time with us, which means it’s very intense for them mentally and physically. Then you play Sevilla in a game like this with a proper competitive opponent.

The start in the game was brilliant. Our situation in the moment is like this: it always happens a little bit, one thing is good and the other thing is not so good. The high press is really good; thank God they played football, we tried, we were there, it was all good, we jumped in the right moment. The midfield press is not so good in the moment because the distances are too big between our lines, it doesn’t work really like that. [There are] different reasons for that.

I don’t try to excuse that. But players train five or six days and play in these circumstances, you have to push. We talk about two or three yards, which gives us all the fine-tuned distances to do what we usually do. Now we have not, we are too far away from each other and we still jump – the last line is too deep, the midfield is still jumping, the first line is too wide. The midfield press is actually the easiest kind of press, to be honest, if you have enough organisation and enough players. That didn’t look too good, that was the moment when we gave Sevilla too much of the game after the start. 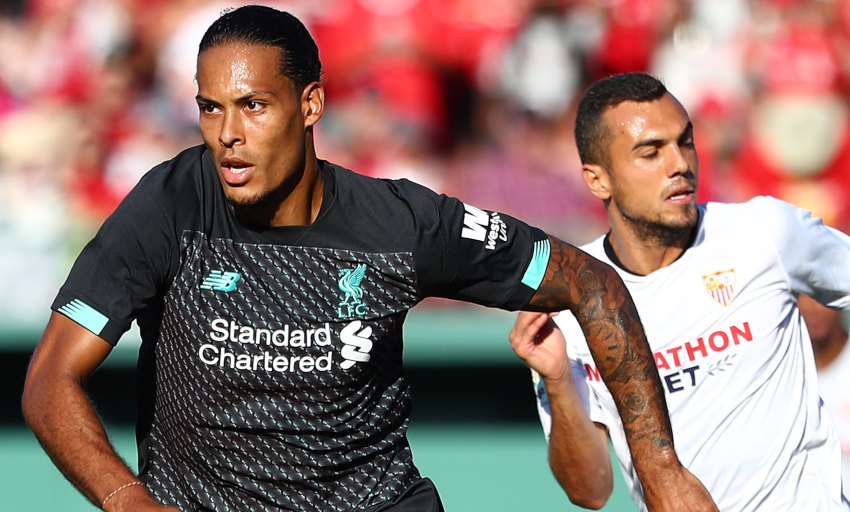 There was a situation when Ox was in a very good situation, first touch brilliant, outplayed the first player and Trent only has to overlap, which he is usually doing. Obviously he didn’t feel it in that moment – he was exhausted or whatever – and didn’t do that, Ox was waiting for it, we lost the ball, that was the first chance for Sevilla. They were in the game and for the first time we were not so good. And that continued.

It was completely OK at 1-1. The goal they scored, we changed two minutes before – we brought Ben [Woodburn] in the half-space and Ox on the wing. It was the position of the No.8 in the half-space, Ben, in that moment, he was not there. Is he not used to it? Probably. Do I ask for too much? I’m not sure. But it happened and they scored this wonderful goal. That’s how it happened. We scored a goal and the second half was the second half with the red card and all that stuff.

We tried, with a lot of positions a very young team, and then we got a counter-attack which was actually pretty much defended in that moment. He is running 100 per cent, we are running 80 per cent – and that’s the lesson you get today. For this, it’s good. I still hate that we lost; I want us to make this mistake and they don’t score, because I can work with this mistake, that’s cool. We are here, we want a good atmosphere and we had a wonderful atmosphere. The people are here, they don’t watch too many live games. I don’t like us to look like we looked then in these moments. I want us to show our best face, but it’s my problem, to be honest. My problem and nobody else’s problem, so let’s just carry on. I had this situation 500 times and obviously I don’t get used to it. I am a bit weird in this way.

All good and if nothing happened seriously to the boys [Wilson and Larouci] then we will work with this game and we will play the next game against a strong opponent. I can’t blame anybody for the opponents because I planned the pre-season, so let’s play in New York against Sporting, then against Napoli in Edinburgh – at least it will not be as warm as it was today, that’s for sure. I don’t think the whole of June in Scotland was as warm as today! Then we go on a training camp, which is unbelievably important, three players back – Mo, Bobby and Ali – from tournaments. They should be fine, we’ll see how fit they are, they had a training programme. Hopefully Naby and Shaq [will be back] as well. Then we have a couple of days to prepare for the first game, a couple more for the second game and that’s how it is – that’s the situation.

On the pitch and playing at Fenway Park…

The pitch was good. How we call it, it is our owners’ city – not the city, but at least the club. It’s a wonderful city, Boston. I don’t want people in South Bend to think I was very critical there about the pitch. I did not say anything bad about the stadium, that’s not right – maybe it is my English. I spoke about the pitch there, but the stadium was wonderful. Not as wonderful as Anfield, but it is difficult to compare. Tonight here was brilliant, the pitch was outstanding in the circumstances because it is a baseball pitch underneath and they put the grass on it. They had more opportunities to water the pitch and that is different to a football stadium, I think, and that’s why it was brilliant. The atmosphere was really, really cool in an historical place. Fenway Park is a cool place and we enjoyed it – apart from the result.

On playing long balls from goal-kicks…

It’s normal. We tried to play football, but we are not silly that we always play football when the other team creates a situation where they start pressing. We all still adapt a little bit to the new rules, that the centre-halves can stay in the box and stuff like that. It was OK. We had a new goalie in the goal and in two situations at least he could not know what we want there from him. When they closed Virg down, then it was clear that [for] Nat Phillips, who is a wonderful, wonderful, wonderful player, that is not his absolute strength, so then we had to go long and fight for second balls. That’s not a problem, that’s football – the best football is always when you mix things like this up. You only have to know before what you do when you shoot a long ball and everybody thinks we will play short or the other way around. In the beginning of the game I was completely happy; when the boys felt intensity and the opponents came a bit up, it was equal but they scored and that’s it.

On dealing with the late returns of Mohamed Salah, Roberto Firmino and Sadio Mane…

We will see. How it always is in life, would I wish for a different situation, would I wish to have my whole squad together for the first day? Yes. That last happened around about 12 years ago, so I am really used to players coming back later and we have to do the specific things. It is a five-week pre-season until the league starts, but a four-week until we have the first competitive game against Man City. You still have to do the physical work, but we are really in a hurry pretty much to do that. We cannot look on the games we play. Again, I come back to that, I know that, I plan the training, I know what we did, I know we’re tired, but I still want to win.

But the boys when they come back, it should be a really short break, so they should be quickly fit – at least physically fit – and then we have to work together. I think it is pretty rare that you play the best football you ever played on the first matchday; there is usually development during the season, but we want to have results from the first matchday and that’s what we are working on. We didn’t a change a lot in the squad. In the moment, Adam Lallana was not there tonight, Nathaniel Clyne was not there, we missed six to eight players in this moment tonight. You fill it up with the kids and that’s nice, it’s cool, but it is hard for them as well. No, I am not concerned, but I know about the situation.

No criticism, but I think don’t stop increasing! We have a lot of space [for more supporters]. On our website we have a lot of news and all that stuff, so if I was a kid at the moment, to be 100 per cent honest, five, six, seven, eight years old, which team would I support? There are not a lot of alternatives – other clubs probably don’t want to hear that, but that’s how we see it at least. So, it’s all good – we love that. I think the game is ready to conquer the US. I think in 2026 you have the World Cup again, so until then I think the MLS will again make a big, big step and women’s football rules the world pretty much, which is impressive. Imagine the number of people you have with the desire for sports in general. As I said, it will take a while until American clubs will be as big as Liverpool is, but in between now and then, you’re very welcome to be an LFC supporter.