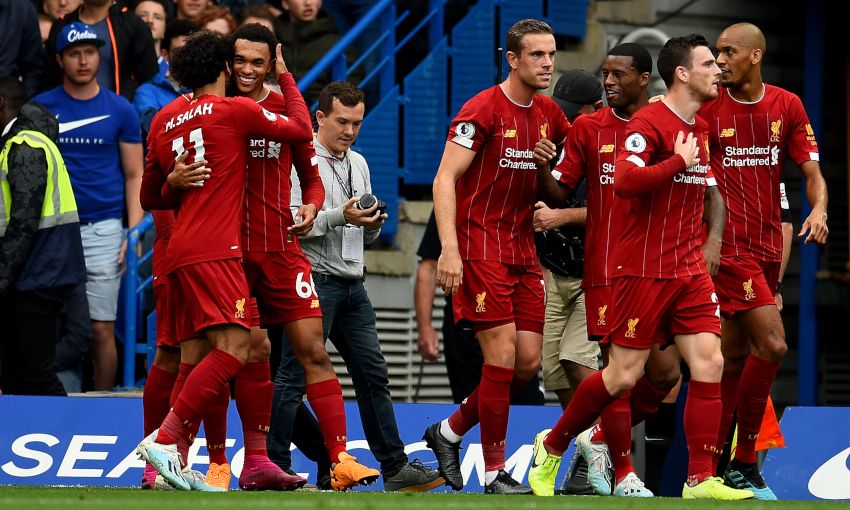 With 14 minutes gone at Stamford Bridge, the Reds right-back stepped onto a Mohamed Salah set-up from a set-piece at the edge of the box and powerfully swiped it into the top right corner.

The effort, which laid the foundation for his side’s 15th consecutive Premier League win, came out of a brief conversation between Alexander-Arnold, Salah and Jordan Henderson.

“Hendo wanted it at first and then I think he thought it was a bit too close for him,” Alexander-Arnold told Sky Sports after the final whistle in London.

“I discussed with Mo that I wanted it rolled to make the angle a little bit better and maybe confuse the ‘keeper a little bit, and I’ve been able to put it away.

“I thought it was too close to go over the wall, I didn’t know if the wall was going to jump so I couldn’t go under it, I had to go ‘keeper’s side.

“It was a good roll and I just tried to put it as hard as I can that side with a bit of placement.”

Roberto Firmino doubled Liverpool’s lead on the half-hour with a close-range header after another clever set-piece routine, this time involving Alexander-Arnold and Andy Robertson.

The visitors were pushed back in the second half, however, and Chelsea pressed hard for an equaliser once N’Golo Kante reduced their deficit.

But Jürgen Klopp’s side saw it out and in the process became the first team to begin successive top-flight seasons with six wins in a row.

“Obviously you can’t expect to come to Stamford Bridge and have it all your own way,” said Alexander-Arnold.

“We were prepared to have it tough in the second half; they’re at home, they’re a proud side, they were always going to come out fighting.

“We started the second half quite well but the last 25 to 30 minutes were really tough. We had to defend well. Obviously they got the goal, we have been able to see it out in the end.”

The No.66 added: “It’s massive, 15 [consecutive Premier League] wins shows what kind of side we are. We have won all different types of games.

“Coming here is one of the toughest places to go in the season. For us to come here and get the win is massive for us; 18 points out of 18 is good going and hopefully we’ll carry on the good form.”