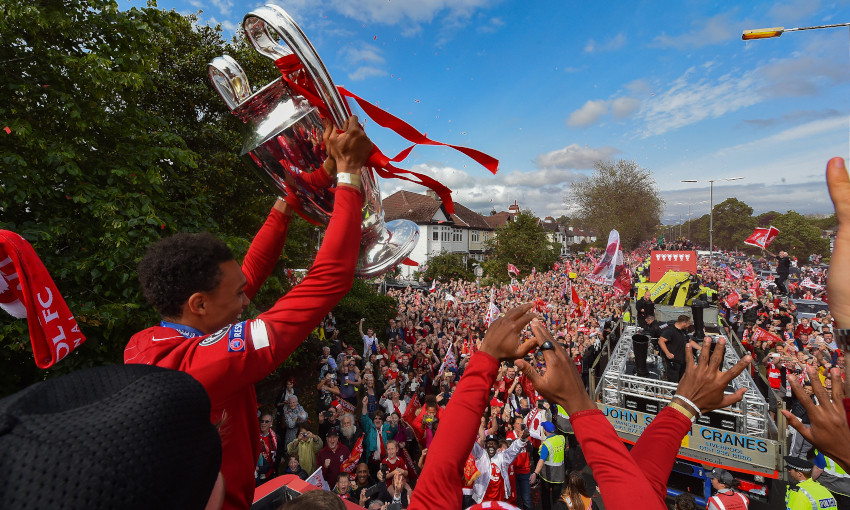 Jordan Henderson interview | The captain's memories of winning No.6

Fourteen years after watching a Champions League trophy parade, Trent Alexander-Arnold was right in the middle of one.

The Liverpool full-back was an excited six-year-old cheering from the streets when the Reds returned from Istanbul clutching the European Cup in 2005, after the most dramatic of finals the previous evening.

A year ago today, Alexander-Arnold found himself on the team bus snaking through the city with Old Big Ears; himself a Champions League winner; and, he wishes, himself providing inspiration to the next generation.

Watch: Trent's memories of Madrid and the parade

“Just thinking back to when I was a kid and how that motivated me; seeing the parade always motivated me to want to achieve those things,” the No.66 told Liverpoolfc.com.

“In 10 or 15 years, the younger generation of today will grow up and hopefully use our success as motivation to want to achieve those kinds of dreams and goals, and know these things are possible with enough hard work.

“For us, we want to inspire a generation to come through and keep the success of the club going.”

Not that Alexander-Arnold’s own appetite for success has been sated by the scenes that followed Liverpool’s 2-0 victory over Tottenham Hotspur last June.

“It’s mad to think it’s been a year since then but it’s one of the best memories I’ll ever have. It’s something I’ll always hold special in my heart,” said the Scouser, still just 21.

“It’s good to be able to remember things like that and hopefully use that as motivation to keep those kinds of occasions coming up: playing in big finals and winning big trophies. It’s the stuff you dream of.

“When you do get to think about a year ago, it’s something that’s special and I’m sure a lot of the fans and the people that were there will also be remembering what happened.”

In his reflections on yesterday’s one-year anniversary of European Cup No.6, Jürgen Klopp explained how he used his time at home during lockdown to relive the emotions and moments he’d missed from Madrid.

Alexander-Arnold did similarly, taking advantage of rare downtime to consider more carefully the personal and collective achievements of recent seasons.

But, ultimately, he prefers to constantly look forward rather than back.

“For me, it’s the progression we’ve made over the last three or four years and the strides we’ve made from being where we were to where we are now, it is massive,” said Alexander-Arnold.

“As a player, an individual and as a team, the progression we’ve all made is astonishing really. Obviously the manager is a big part of that, and the staff and everyone – the whole club in general has come on leaps and bounds. It’s something to be proud of.

“Over the lockdown it was a good chance to know that we’ve still got a lot of potential to unlock and we can still get better, which is what we strive to do.

“Thinking about what we’ve achieved motivates us to go and do those things again.”