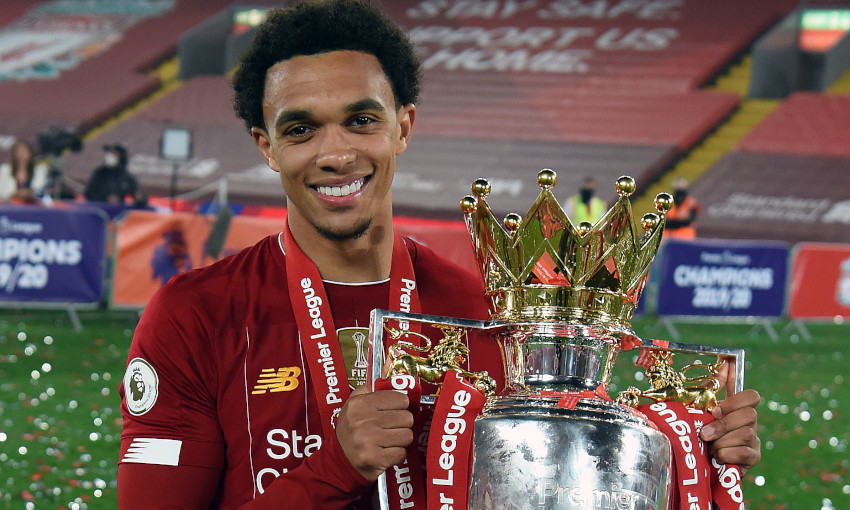 "This is the one we all wanted," smiled Trent Alexander-Arnold as he stood with a Premier League winner's medal around his neck.

The Liverpool right-back, still just 21, wasn’t even born when the club had last been crowned champions of England, but his upbringing in the city and Red affiliation from a young age taught him everything about the importance of reclaiming the title.

On Wednesday night, the tireless squad he has become integral to finally achieved it, ascending the Kop to lift the Premier League trophy after beating Chelsea 5-3.

Fittingly, Alexander-Arnold had registered a goal and an assist in the 90 minutes as Liverpool completed a third successive league campaign without defeat at home.

Amid the celebrations, the No.66 paused to reflect on the historic night with Sky Sports – read his reaction to a landmark feat below…

Trent, as a local boy what does this mean to you tonight?

Everything. Just the feeling of being up there. This is the one we all wanted as fans, as players, as a club. I’d swap every medal I’ve got just to have this one round my neck. But I think that the way we played this season and the feeling we felt being up there on the podium is unbelievable. For the club it’s massive.

You didn’t have the fans tonight but special to have the family here?

A big thanks to the Premier League, the council and the Government, everyone who allowed it to happen. It’s an amazing feeling to be able to share it with your family. They are the ones that mean the most and as the gaffer said before the game they are the people that we play for. We play for the fans but they are the people that have helped you along the way from a very young age and they are the ones that have seen the dark times and the good times, and it’s amazing to be able to share a night like this with them.

There’s been a lot of lads who have come through the Academy, some of the greatest players in this club’s history. How privileged do you feel to have actually won that Premier League title and be part of this club and part of this team especially?

You talk about that medal as the one you want and you wouldn’t swap it for any other one. Graeme Souness said the same. Do you think that mentality will take this team even further?

Definitely. A few years we spoke about it. I think getting the first trophy in and winning the Champions League last year helped our appetite to win more, more and more, and I think nights like this and the feeling that you get now is just the feeling that you want so much. It’s something that will drive us and I think next season this is what we want to be like in 12 months’ time, to be in a position to celebrate and hopefully in 12 months we’ll be able to celebrate with the fans here.