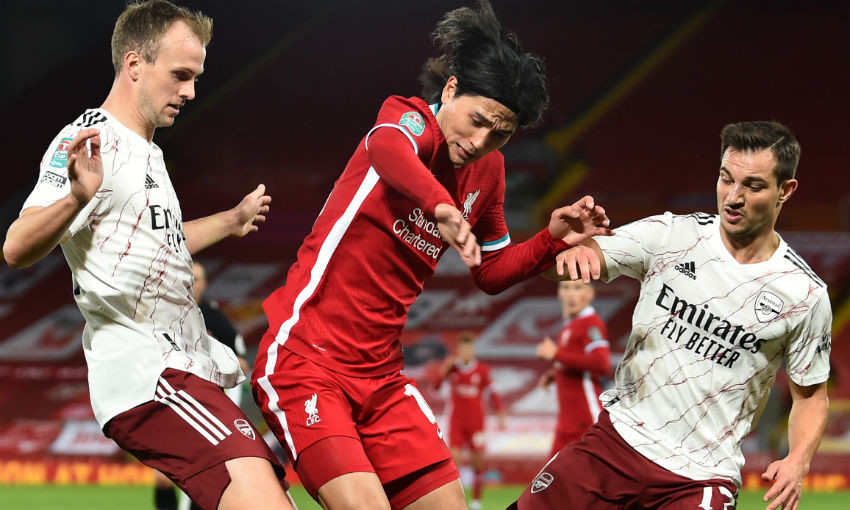 Liverpool suffered defeat in the Carabao Cup fourth round on penalties to Arsenal at Anfield on Thursday night.

After the game had ended goalless on 90 minutes, the Gunners progressed 5-4 on spot-kicks, with Joe Willock converting the decisive effort.

During normal time, Takumi Minamino rattled the crossbar towards the end of the first half from point-blank range and the Reds found visiting ‘keeper Bernd Leno in fine form after the break.

However, it was to be Arsenal who secured a place in the draw as they prevailed on penalties.

Liverpool made nine changes from Monday’s Premier League win over Arsenal, with only Mohamed Salah and Van Dijk retaining their places.

Jota was handed a first start for the Reds, while Harry Wilson and Rhys Williams were also included in the XI.

Just three days on from a Premier League meeting at Anfield, the teams went head to head again at the same venue, albeit with much-changed line-ups.

The last time the clubs met in the Carabao Cup, 10 goals were traded before a penalty shootout settled the tie in favour of Liverpool at the same stage of the tournament last season.

This time around, the Reds started assertively, hogging the possession, but it was Arsenal who fashioned the first chance when Nicolas Pepe escaped down the left and directed the ball into the centre. Bukayo Saka touched it off to Eddie Nketiah, but Adrian thwarted the forward by palming to safety at his feet.

At the other end, the hosts recycled play into the area from a cleared corner when Curtis Jones fed Jota. His cut-back was shinned wide by Grujic.

As the contest settled into a rhythm, there was a freneticism about the play, with both sides probing, but unable to generate clear opportunities.

Jones took aim from distance on his left foot, though ultimately it was a clean take for Leno.

With half-time creeping nearer, Liverpool were beginning to build a head of steam once more – and they came agonisingly close to breaking the deadlock.

After a set play was cleared, Neco Williams hoisted the ball back into the area, where Jota flashed a header across goal.

Leno sprung to his left to palm it away; however, it fell for Minamino, whose first-time whack from six yards out crashed against the crossbar and away from goal, keeping Arsenal level. 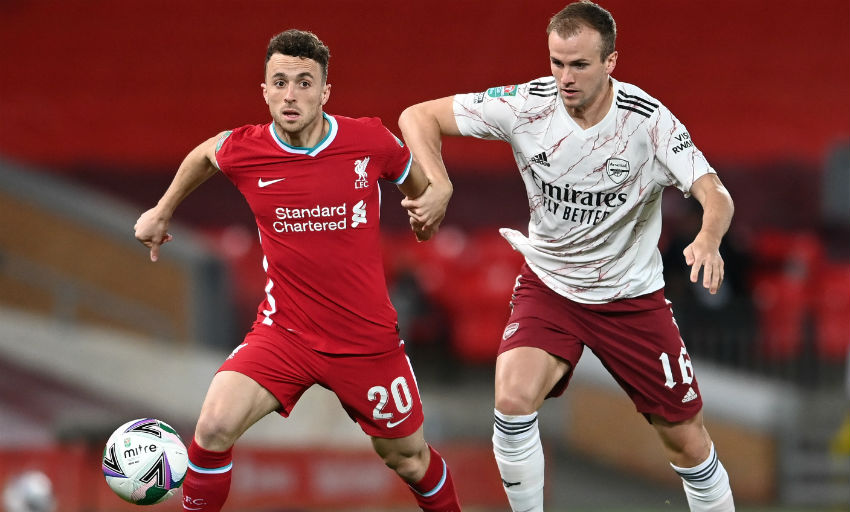 The Reds continued to threaten in the opening stanza of the second period – and Leno was required to execute a fine reflex stop to keep out Van Dijk’s side-foot towards the bottom corner from Grujic’s knockdown on 52 minutes.

Soon after, Jota motored into space just inside the area before watching his shot deflect wide of goal via an Arsenal body.

On the hour, the visiting goalkeeper was called into action again. This time Leno had to divert a Grujic snap-shot away as it looked to creep inside the lower rungs of the post.

Liverpool elected to withdraw Salah and Van Dijk in the aftermath, with Joe Gomez and Divock Origi replacing them.

Still, Leno was seeing a lot of action – and the German custodian produced a one-handed stop to thwart Jota’s chest-and-hit after he’d gone inside Sead Kolasinac.

The resulting corner brought more action for the Gunners’ No.1 as he was required to claw Grujic’s looped header away from the top corner.

In the 70th minute, it was the turn of Liverpool’s ‘keeper to keep the scoreline goalless, with Adrian reacting smartly to parry Rob Holding’s powerful close-range header from Pepe’s delivery.

Georginio Wijnaldum took Jota’s place for the final knockings as the prospect of penalties began to loom into view.

Pepe skewed off target inside the area for Arsenal and Neco Williams drilled straight at Leno from the edge of the box.

Then, in stoppage time, James Milner rescued a dangerous-looking situation for the home team with a sliding challenge on Willock.

But, for the second season running, it was down to a penalty shootout to separate the sides – indeed, as it had been in the FA Community Shield meeting at Wembley in August.

After Mohamed Elneny and Origi had saw their respective spot-kicks saved in the first five, Wilson was foiled by Leno, allowing Willock to squeeze his kick under Adrian and eliminate Liverpool from the tournament.