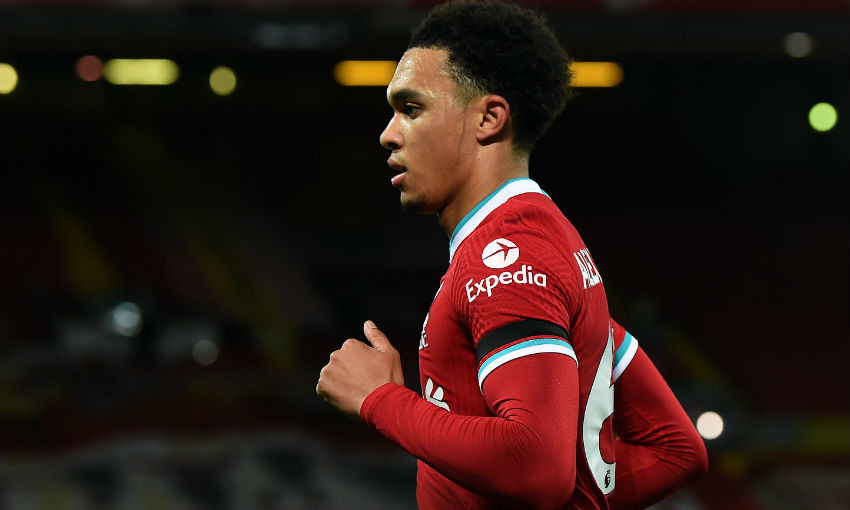 Trent Alexander-Arnold is thriving amid a relentless fixture schedule during which Liverpool have gathered momentum.

Tonight’s Champions League meeting with Atalanta BC will be the Reds’ sixth match in the space of 17 days, with a trip to Manchester City to follow on Sunday prior to the November international break.

However, Jürgen Klopp’s team visit Italy having reeled off four consecutive wins and Alexander-Arnold – who has not missed a minute of Premier League or European football since his late substitution on the opening day of the season – is relishing the challenge posed by a congested calendar.

“For me personally, I enjoy the fact of playing three games a week,” the right-back, who has also represented England this term, told Liverpoolfc.com.

“The games coming thick and fast, when you’ve got momentum there’s nothing better. It’s tough physically to obviously recover quickly but that’s part of the job and I think we’re all used to it now.

“We’ve been doing it for about three years now, playing so many games, the relentless fixtures. Obviously the last year on the whole has been strange for everyone so it’s a little bit different to normal, but the fact of still trying to recover and making sure that you’re ready physically and mentally for games is still the same.

“We go through the same routines and make sure we’re ready as a team and individually.”

Read on for Alexander-Arnold’s thoughts on the test awaiting in Bergamo this evening, the situation in Group D and Liverpool’s recent form…

The game against Atalanta is a meeting between Group D’s top two. There’s a bit of a gap to Ajax in third place so does this match feel significant in terms of deciding who qualifies, and possibly who wins the group too?

Yeah. I think every game in the Champions League, especially in the group stages, is important if you want to top the group, which is obviously our aim. So I think this game especially, with the way the group’s looking at the minute, it’ll give us a massive chance to qualify top of the group if we can come away with three points, which is obviously our aim as well. We’re going over there making sure we have our game plan and our tactics right to make sure that we get the three points.

It’s a chance to go five points clear at the halfway point of the group – that really would set you up nicely for the final three games, wouldn’t it?

Yeah, hugely. I think the few campaigns that we’ve had in the Champions League we haven’t really had the best of group stages and we’ve always left it really until the last gameday. But hopefully this time we’ll be able to make sure that we get the results. We’ve started well with two wins and two clean sheets, we can’t really ask for more than that, but we have a job to do [on Tuesday]. I think football’s a strange game and anything can change so quickly, so for us the focus is to make sure we get the three points.

It’s four straight victories in all competitions now and you keep finding ways to win despite plenty of adversity. Is there a feeling in the dressing room that you’re building up some real impetus?

Yeah, it’s kind of the same as last season really with the way that we’re winning games. It’s never easy, especially in the way that this season is [and] with the results that are going on, the scorelines, it’s probably a little bit tougher to get the results that you want. You haven’t got the momentum of crowds and crowd pressure and stuff like that to play in your favour, so it’s tough but it’s something that we’ve adapted to. It’s something that we’ve had to adapt to and I think by adapting so quickly we’ve put ourselves in good positions in the competitions that we’re fighting for.