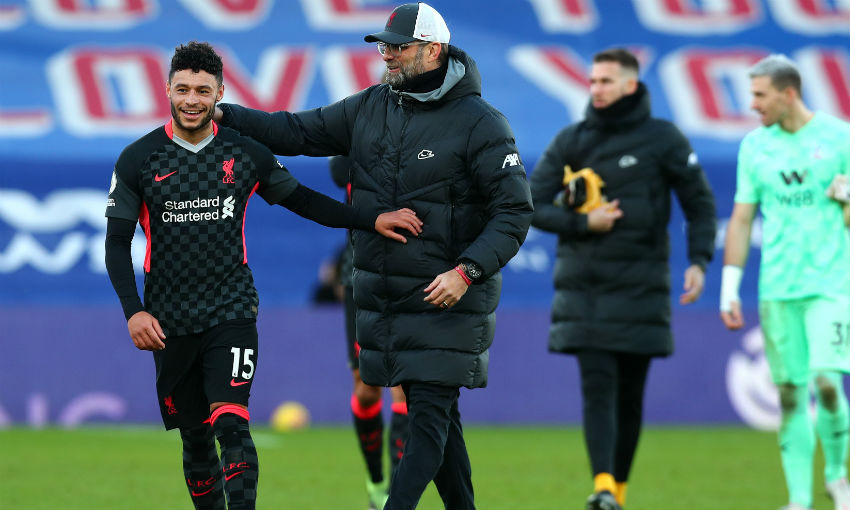 Jordan Henderson welcomed a 'big addition' to the Liverpool squad after Alex Oxlade-Chamberlain made his comeback from injury in Saturday's win over Crystal Palace.

Oxlade-Chamberlain made his first appearance of the campaign – having sustained a knee injury in pre-season – when he replaced Roberto Firmino in the 75th minute at Selhurst Park.

The No.15 still had enough time to leave his mark on the contest as he laid on the assist for the Reds' seventh and final goal of the afternoon.

"Very nice to see Ox back," Henderson told Liverpoolfc.com after the 7-0 defeat of the Eagles.

"He's been working extremely hard to get back. Looking sharp again and I thought he did well when he came on.

"So the more minutes he can get, the better really because he's a big addition to our team."

Oxlade-Chamberlain will now hope to contribute further in a packed schedule for the Reds over the New Year period.

Henderson continued: "We've got a little bit of a break going into the next game but after that it comes thick and fast. So we need to be ready for that.

"Hopefully we can have a couple more coming back from injury or [get] fitness levels even higher. So it's an important period for us over the next few weeks."

Jürgen Klopp's side will spend Christmas Day on top of the Premier League after following up their crucial victory against Tottenham Hotspur with the rout at Palace.

The target now for Henderson and co is to keep that momentum going.

"They [Palace] are a good team," the captain said. "I think we've seen this season they make it difficult for teams and have had some really good results.

"For us, it's important after a big week to pick up the three points again here at a tough place to come.

"It's very important for us and another good step going forward. We need to keep going."

Henderson netted his first goal of 2020-21 at the weekend, scoring Liverpool's fourth of the day with a brilliant curler from the edge of the penalty area.

"But I thought all the goals were decent finishes. [Being] ruthless in front of goal is always important."