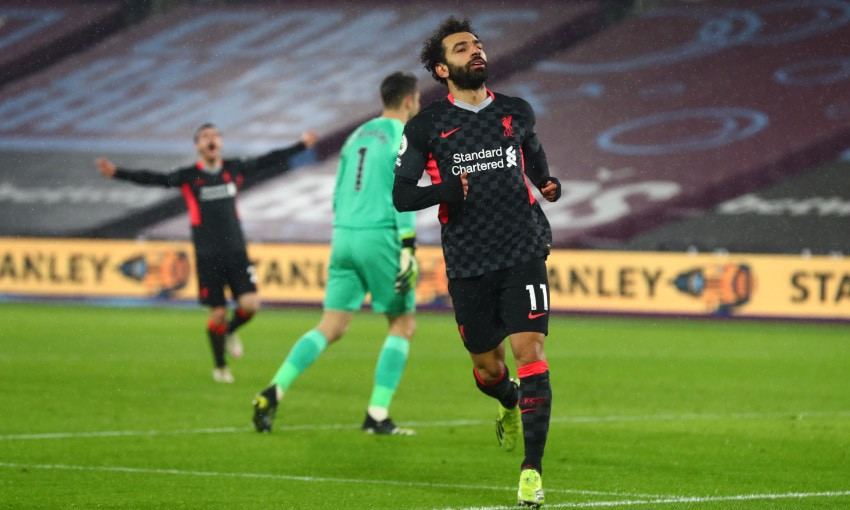 The Reds' second visit to the capital this week ended in another win as Salah netted two stunning goals at London Stadium, with Georginio Wijnaldum adding the third.

The result moved Jürgen Klopp's side up to third in the Premier League table, leaving Salah and his teammates delighted following another successful away day.

The No.11 told Sky Sports post-match: "It's a good win for us today. We play away for the second game in a row and you need to win every game now.

"So, we just need to carry on and keep winning."

After opening the scoring with a brilliant curling effort inside a crowded penalty area, Salah put the finishing touches on an incredible sweeping Liverpool move to make it 2-0.

Andy Robertson cleared a West Ham corner to Trent Alexander-Arnold, who then sprayed a crossfield ball to Xherdan Shaqiri. Salah brought down a brilliant first-time pass from his Swiss teammate before calmly lifting the ball over Lukasz Fabianski.

"I just keep practising in training for my right foot and left foot," the Egyptian reflected. "But it was a good ball from Shaq.

"I have to give him credit as well for the lovely ball from him. I just kept the first touch and the second was the finish."

It's back-to-back wins for Klopp's men as they successfully followed up Thursday's triumph at Tottenham Hotspur.

Salah believes consistency is now required from the Reds until the end of the season if they are to keep hold of the Premier League title.

He continued: "Every year is like that. If you want to win the league, you have to win every game.

"You just need to keep winning if you want to really win the Premier League."