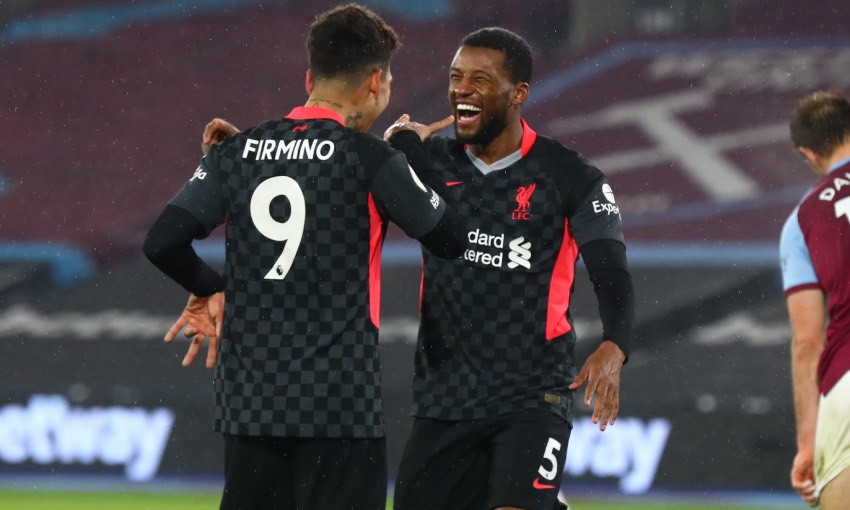 Georginio Wijnaldum refused to get carried away by two wins on the bounce as he challenged Liverpool to consistently replicate Sunday's display at West Ham United.

The Reds' two trips to London last week produced impressive victories that saw them rise to third in the Premier League standings.

Wijnaldum was on the scoresheet in the 3-1 win over West Ham, adding a well-worked third goal after Mohamed Salah's stunning brace.

While taking great satisfaction from the result, the midfielder quickly moved on to setting his sights on securing more points in the league.

Read on for Liverpoolfc.com's post-match interview with Wijnaldum…

Proud of the team tonight ❤️🙌🏾 Also very happy to contribute with a goal in my 200th #premierleague match 😁 There’s… https://t.co/5JO2iybjk7

Gini, two wins in a week – how pleased are you with that performance overall?

Really pleased. I think besides the goals, we also played good football. In some moments we were enjoying it too much where we made some mistakes. But I think the game was a good game.

Is that second goal a sign that Liverpool are back to their best now?

I don't want to say we are back because I think you have to show it every game again. That's what we have to do. We just have to continue to play the way we scored the second goal and try to do it every game. Of course, every game is difficult but when the chance is there to create a chance like this we should do it.

Three very good performances now and two very good results away from home, do you feel this side is starting to get into the rhythm now?

Well, like I said in my previous answer, I don't want to say we are back but I think we have to show it in every single game and that's what we just have to do. I think it's a really bad thing to think that we are back because every game is another situation, another game and another opponent. We have to do it again. I think we look at it that way and just try to play the games with confidence.

A quick word on Jordan Henderson, there are only three Liverpool players who have played more Premier League games for the club now. How big a figure is he for this team regardless of where he plays?

A really big figure. I think he shows it on the pitch. I saw on Instagram a video of how he coaches the team and you can already see how important he is for the team. Besides that, he is a good player and he is playing good in a position which is not his usual position. He is unbelievable and a really important player for us.

How different is it chasing in the title race rather than leading it?

Well, I don't think we should think about that like leading or chasing. We just have to look at it game by game, give everything game by game and then we will see where we will be at the end of the season. I think that's where the focus should be right now.