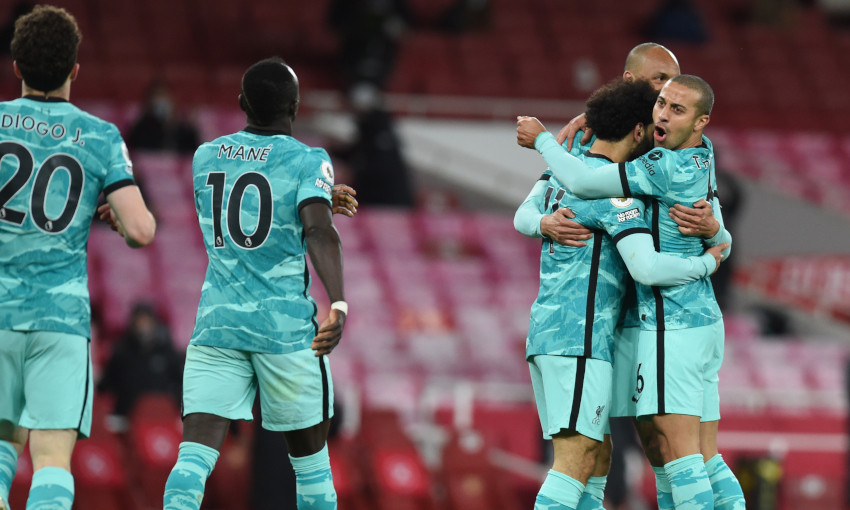 Liverpool made an impressive, winning return to action with a 3-0 defeat of Arsenal at Emirates Stadium on Saturday night.

Having been on the front foot during a goalless first half in north London, Jürgen Klopp’s side turned the screw following the interval and secured maximum points as Diogo Jota’s double from the bench sandwiched a goal by Mohamed Salah.

Here are five talking points from the success in the capital...

Liverpool picked up right where they had left off after 19 days without a game to chalk up three victories, and three clean sheets, in a row.

It was an authoritative and confident display from the first kick and one packed with a raft of excellent individual performances from Klopp’s men.

The Reds racked up 16 shots on goal (seven on target) to the hosts’ three and enjoyed 64.2 per cent possession at the home of a side on a four-game unbeaten run in the league.

“We were really in charge of the game, were dominant, played good football against the line-up of Arsenal with all this counter-attacking threat,” said Klopp.

“What was the most important thing in defending was how our counter-pressing was, and that was absolutely exceptional and it was very important.

“So, we took that quality away with the counter-press, didn’t use our chances obviously [in the] first half but we knew we have to keep going, we have to do a few little things even better in the second half [which] we tried to show the boys in half-time.”

The result ensured the positivity generated by the previous wins over RB Leipzig and Wolverhampton Wanderers was not lost to the unusually lengthy gap in the fixture schedule.

Portugal forward Jota, fresh from three goals on international duty, had only been on the pitch at the Emirates for three minutes when he unlocked the match for his team.

With Liverpool still seeking to translate their dominance onto the scoresheet, the No.20 met Trent Alexander-Arnold’s fierce delivery from the right-hand side with a header powerful enough to elude the grasp of Gunners goalkeeper Bernd Leno.

It was the kick-starter for an 18-minute spell featuring three goals for the visitors, with Jota bookending the pivotal period with his second of the night.

Salah’s prod towards Sadio Mane inside the area rolled favourably to the arriving Jota, who dispatched an unerring, first-time hit into the net for his 12th club goal of the season.

“It doesn’t matter if you start in the starting XI or on the bench,” he said post-match. “You need to be ready to make an impact. That’s what I did today and that’s what I want to do always.”

Saturday’s clash brought up the milestone of 150 career Premier League appearances for Salah, who naturally marked it with a goal.

An exquisite one it was, too, as the Egyptian bettered Gabriel to collect Fabinho’s deliciously spun pass in behind before calmly slotting his finish between Leno’s legs from close range off his right foot. 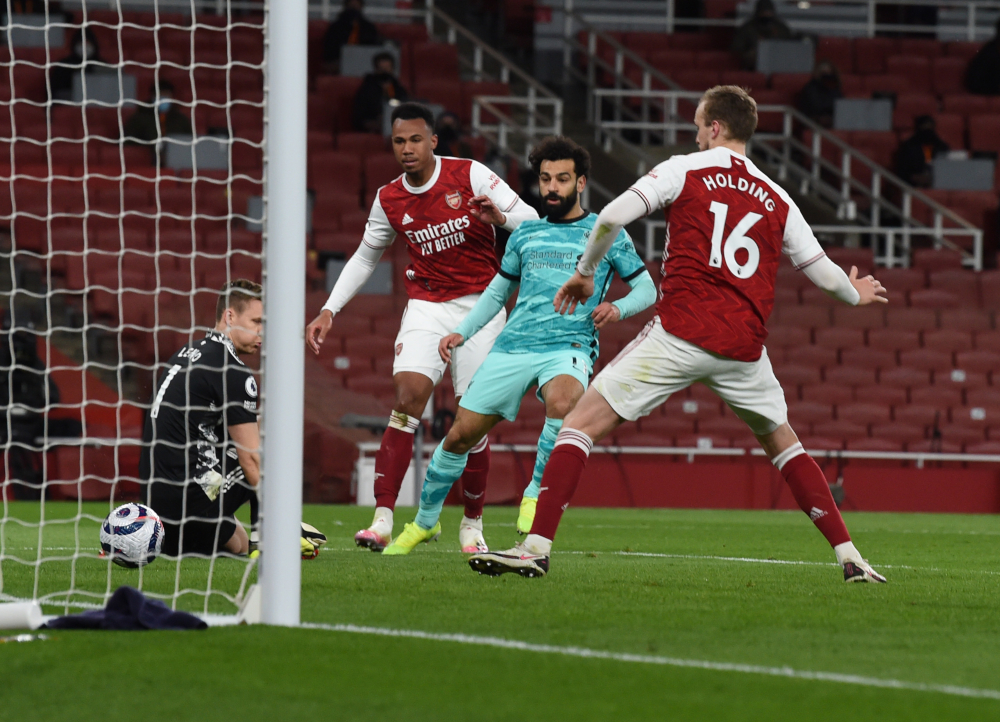 It increased Salah’s tally in the competition to 93, with 91 of those netted for the Reds.

He now once again leads the way in the race for the Golden Boot, his 18th league strike of 2020-21 moving him one above Tottenham Hotspur’s Harry Kane.

Salah could still end this season in the club’s top 10 all-time goalscorers. With eight Premier League fixtures left and at least two to come in the Champions League, he would need 11 more strikes to leapfrog Sam Raybould.

A new best at Arsenal

This win came by the biggest margin Liverpool have ever achieved in a top-flight game away at Arsenal.

Their first victory at the Emirates since the 4-3 thriller on the opening day of 2016-17, it completed a league double over Mikel Arteta’s Gunners this season.

Klopp’s formidable Premier League record against the north Londoners was stretched to just one loss in 11 meetings, with seven wins and three draws. 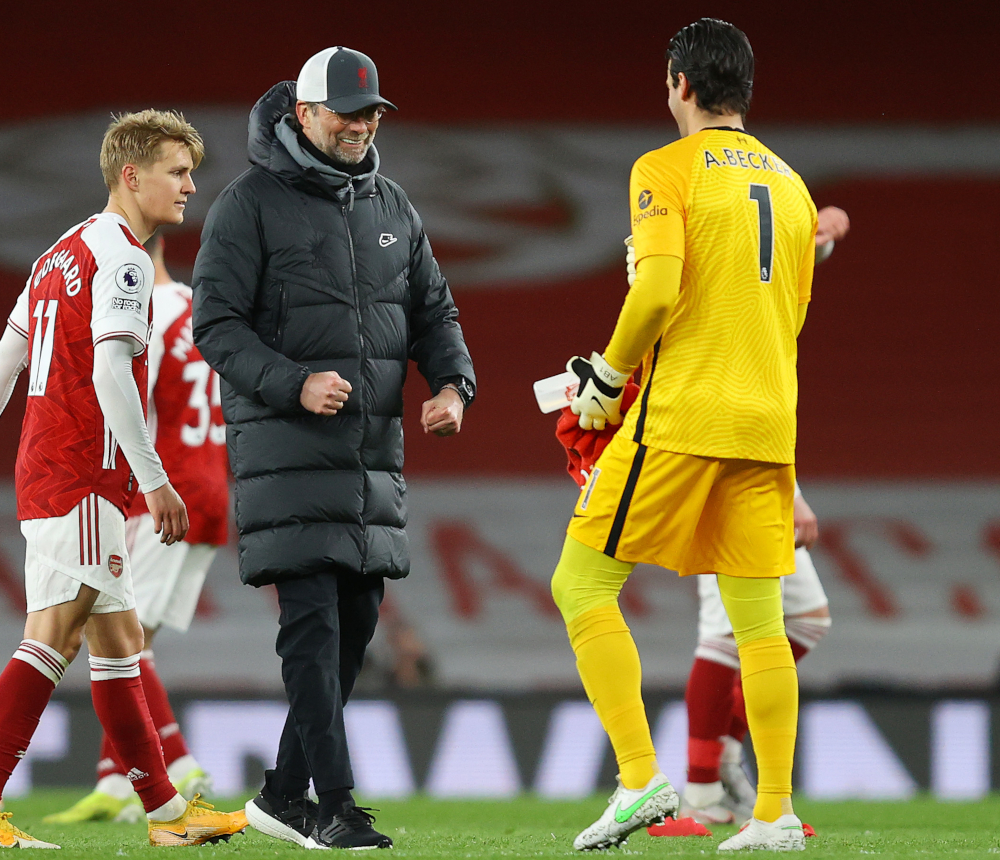 The Reds have plundered 33 goals across those encounters under the German.

Liverpool ended the day two points away from a top-four spot.

Chelsea’s 5-2 home defeat by West Bromwich Albion earlier on Saturday offered the Reds an opportunity to reduce the gap to a Champions League qualification berth - and they took it with relish.

Klopp’s men climbed up to fifth as a result of their win at Arsenal, ahead of the remaining Premier League games on Sunday and Monday.

“In our situation it’s clear, with all the things that happened to us in the past in this season, [they] brought us in a position where we don’t have it in our hands,” said the boss.

“We have to win our games and somebody else has to lose because we don’t play most of them anymore, but we have to make pressure on them and that’s what we did tonight with the result.”