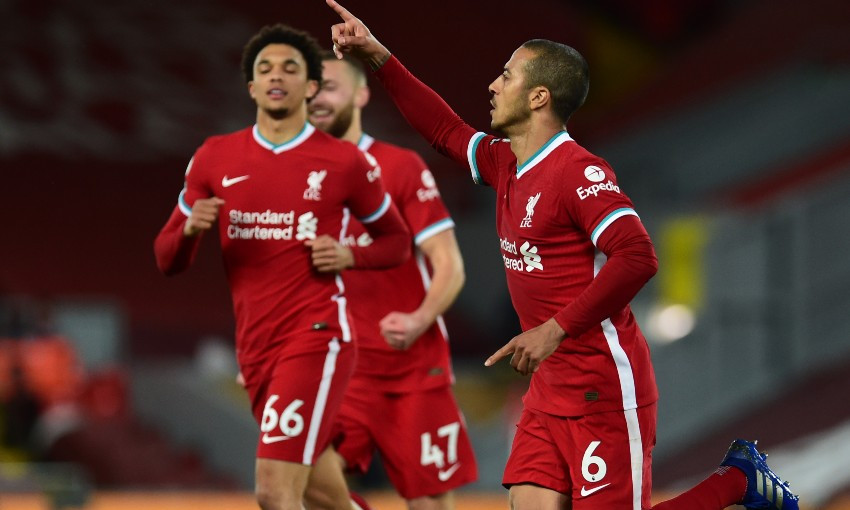 Thiago Alcantara spoke of the 'amazing feeling' of scoring his first goal for Liverpool while expressing his hope of a top-four finish.

The No.6 curled home a fine Kop-end effort late on to seal Saturday’s 2-0 victory over Southampton – a win that moves the Reds to within six points of fourth-placed Leicester City, over whom they hold a game in hand.

Thiago told Sky Sports: “I always try to bring out the reality – we are for sure not happy with the situation right now, but for the mood [and] for the confidence for the next game, we are very happy with the win.

“It’s always a great moment when you score and also help the team, but as I said, we have to keep fighting until the end. We have this small chance [to qualify for the Champions League].

“We try to be as objective as possible. There is a very small chance, but I think we had chances in the past. The door sometimes closed for us but the window is open, so we try to get through the window!

“It’s an amazing feeling [to score] but the most important thing is the three points and that we keep fighting for this small miracle that we can have.”

The Spain international’s 90th-minute strike made sure of the three points at Anfield, where Sadio Mane headed the hosts into the lead just after the half-hour mark.

He continued: “I know that I am not a specialist, I am not a goalscorer, but I am trying to always be near the area, to make the last pass, to try to score and shoot. Yes, for sure it is very special because it is my first goal – but I hope it is not the last!

“For sure, I think for all of us [it has been a tough season]. But as I said from the first day, we have the privilege to play this amazing sport and to keep playing in this kind of stadium, against amazing teams as well.

“So we have to be glad with our personal situations and try to bring joy to the fans and to the people.”