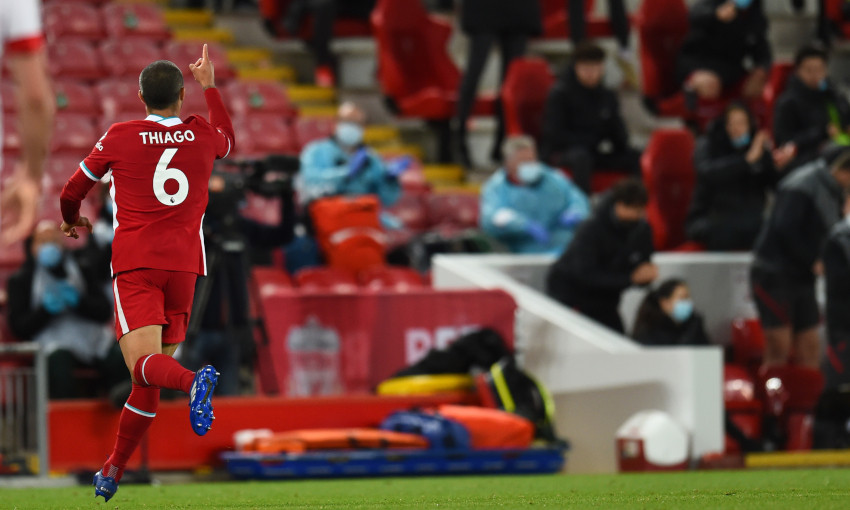 Thiago Alcantara has explained the celebration that followed his first goal for Liverpool on Saturday night.

The No.6 opened his account for the Reds with an accurate, curling finish from 20 yards that confirmed a 2-0 win for Jürgen Klopp’s men against Southampton at Anfield.

Thiago immediately ran in the direction of the home dugout in the Main Stand, pointing and celebrating towards his teammates on the bench.

“For sure I have a special relationship with the guys there that didn’t play,” he told Liverpoolfc.com post-match.

“When you are playing you always think about them, how they work and how they behave even when they don’t play, so the goal was for them [the players on the bench].”

Sadio Mane’s first-half header past his previous club had given Liverpool a 1-0 lead in the Premier League clash, but it then remained in the balance for the majority of the second period.

Indeed, Saints had several chances to equalise, only for Alisson Becker to keep the visitors at bay with a number of excellent saves.

Thiago’s strike – which came with five seconds of normal time remaining – finally secured three points for the Reds to extend their unbeaten run in the top flight to six matches.

“We have one of the best goalkeepers in the world here with us,” said the Spain international.

“And also the guys in front are not only scoring but also defending, so we have this balance that made us win games.

“Especially here at Anfield we have had many situations that they [the opposition] scored a goal; even though we dominated the game, they scored and then we break down a bit.

“With this result, 1-0, we get a bit, I would say, hectic [but] fortunately we could score the second one to bring a bit of calm to the game.”

The win means Liverpool are now six points behind fourth-placed Leicester City, with a game in hand, in the race for Champions League qualification.

Next up for Thiago and co is a trip to Manchester United on Thursday night, two days after the Foxes themselves play at Old Trafford in the Premier League.

“I said to the guys, our main goal must be always the next game that we have, not the final result of the season,” he added.

“Now we are facing a great game on Thursday and we will go again.”

Thiago Alcantara: I'm not satisfied with my form, I always want more