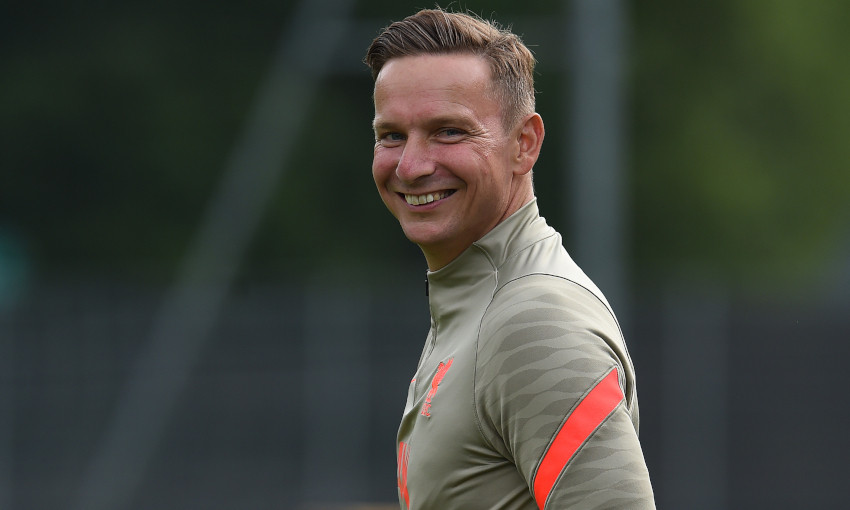 Pep Lijnders reflects on Liverpool's move across Austria to Tirol, reveals details of the coaching staff's bowling competition and gives insight into the intense running drill the players were put through on Monday night in his latest training camp diary update.

Since my last entry, we’ve moved to new surroundings across Austria to Tirol. When we arrived at our new hotel, we put two quotes in big writing on the flip chart.

Our target in Tirol: Improve a little each day! Champions don’t complain, they are too busy getting better. It was just to set the tone for this next period. It’s time to move on, literally and figuratively.

We drove for two-and-a-half hours through beautiful Austria to arrive at our new hotel; the architecture of the houses in combination with the green mountains is beautiful. On the TVs in the coaches were the Olympic Games, the real pride of top sport in my opinion. I have to say, it would be a dream to visit the Olympic Games one time in my life.

With so many nationalities in our staff, it’s great to discuss the Olympics with each other and while watching the skateboarding on Sunday night, we told each other our greatest Olympic moment after Jürgen asked for it. For me, I explained Inge de Bruijn winning three gold and one silver in Sydney, the last one for the relay. I still get goose bumps thinking about it, but anyway, with Portuguese, English, German and Dutch together, there is a lot to discuss.

We travel a lot during the season, but we never have really the time or mindset to fully experience a new environment or culture. The mindset is with the performance, the game-plan, the analysis, so it’s hard to relax during these trips. It’s Champions League and this means business. There is always something intense that occupies the mind.

That makes it now much nicer that we are longer in Austria than usual and planned to have every week one day off, in order to give time to recover for the body and take the mind off training.

Jürgen and I sat together on the bus to go through the next days of training; some great plans are coming up. Our second phase of pre-season starts now, ‘back to consistency’. We know what we want, a quality game, now it’s about applying it together constantly.

I shared all plans, information and details with the other departments. Key in a training camp like this is the fluidity of sharing information. With this, each department can prepare properly and anticipate problems. At the end of last season we had our main three phases ready: the amount of training sessions, the timings, the whole plan in terms of our ideas in the game.

Then, in the last period of the off-season, we started to prepare all sessions in detail. That took a while because you want to make it special and ‘new’ for the boys.

We’ve had some of the lads who were injured at the end of last season back with us, including Trent Alexander-Arnold.

I’m so proud of Trent. He was this natural technical talent when he was just 15 years old. He had all the characteristics I loved: a mentality to win, passionate to improve but his emotions sometimes took control instead of him taking control over the emotions. He trained with so much power and competition.

He grew step by step into the wonderful guy he is now, surrounded by a lovely family, he created this superb personality. He has this aggression in a positive way. If someone represents this quote of Bill Shankly it’s him: playing at the highest level isn’t pressure, it’s a reward. I still see the same fire in his eyes in each training, but I don’t see this young guy anymore; I see a leader, I see someone who controls his emotions, a future captain. A leader by example. The best clubs have one thing in common, a ‘one club’ mentality. The culture spreads through all departments. It’s great that our talents, the real ones, can make these steps together with our team.

On our last night in Salzburg, we played bowling with members of the coaching staff, on the invitation of Andreas. The German staff, including Jürgen, Pete, Korny and Schlumbi, formed one team and tried to keep up with us… ha!

Matt, Vitor, Jack, myself and the magic thrower John Achterberg were on the other side and, let me say it like this, there was no VAR needed!

Earlier in the day, Chris Rohrbeck – our former physio, who is now working for Mainz – visited us in our hotel, after receiving a negative COVID test. It was great to see him again.

When we arrived in Tirol, our first session on Sunday night was designed to stimulate finishing our counter-attacks, finding a good last pass versus stopping the counter-attack. Scoring was the target, but as always, the final pass makes things much easier, so we overload situations where the boys had to play this last pass, something we really want to improve on after last season.

When there are problems in a season, it’s so important to recognise it, to admit it, to learn from it but at last to forget it as well. It’s about moving forward constantly. We know what we want and need to improve. That’s why this pre-season is so important, finally we have time to train repeatedly.

That’s why from the first session there were few ideas we repeated constantly. Improve a little each day, or as we say in posh words, systematic repetition! First-time passes, shots from the edge of the box, a full box, the last pass. Wim Jansen, the former Dutch international and Feyenoord legend, told me once when he was visiting Melwood a few years back, the first touch and the last pass are the two most important technical attributes in the game. I always keep this in mind while coaching.

Harvey played some outstanding last passes, Mo and Sadio were deadly in the finish, Taki was on fire as well and Joel had his Brazilian boots on again. Coaching is about simplifying things, making it easier for the players, so we spoke about the timing of the pass, to adapt your movement to the player who has the ball. Football smartness. Common sense practice, not complicating things.

John Wooden says there are eight laws of coaching: one is explaining, two is demonstrating, three is correcting and four, five, six, seven and eight are repeating, repeating, repeating, repeating, repeating... that’s why pre-season is gold for us at this moment. The ultimate goal of our training is to create habits in our counter-press that the boys can intuitively apply under the highest pressure. Finals. 14-13 was the end result between the two teams in this drill. That’s close, but still it means 30 push-ups for the losing team. I think the best goal was Taki with a header at the back post or Ox smashing one in high at the front post. The most difficult shot to defend for a goalkeeper I think, high first post or low second post.

Curtis was asking, “How does it look Pep?” when Robbo replied, “Don’t ask, the less we know the better!” Robbo then asked me, rather streetwise, “Remember a few years ago when you joined in these running sessions?” Fair play.

Groups were split and were given timings that were hard to reach during their 6x1,000 runs. This, by the way, was after a proper morning session where we played non-stop our identity game, three teams of eight competing over the whole pitch and some 11v7 variations.

The idea of these was to stimulate all our basic strengths for a stable team. Here we can see how fit our players really are to go, go and go again and still keep quality individually and collectively.

In the runs, they had to shut up the voice in the head saying ‘it’s impossible’. It shows again that the brain is the most important muscle in the body. The running is just an extra impulse for our never-give-up mentality, nothing more, nothing less. Milner going in front of everybody… unbelievable. This was a welcome for Ibou to the real LFC pre-season!

There are two games in football: the scoreboard and the mentality of the team, the first one you can lose sometimes, but the second one never. That’s what we train in these moments. Last year, some of the coaches joined the recovery runs with the players, but the moment we did the boys started to raise the pace. Not cool.

Time for another workout in Austria ⌚💪 https://t.co/dtIzyRpgpn

Jürgen even had the idea to spice it up with a penalty challenge after the fifth 1,000m. But in the fourth lap when we said 10 seconds quicker, all groups went 45 seconds quicker. Some groups went to three minutes and five seconds. I love it.

But back to the penalty challenge, the idea was if you shoot and miss you have to do 2x1,000 extra, but if you score it’s done and if you don’t take the chance, you have to do only 1x1,000 more. It’s a game for the brain: 180 heartbeat and then make this decision. Sadio, Trent, Milner and Neco missed, but everybody took the chance. Then you saw some team players; Ox immediately ran with Trent; Mo went to help Sadio; Robbo and Diogo went with Neco. These things make us coaches smile.

The spirit was good throughout, but some players had real panic on their face before taking their penalty!

Tuesday is a recovery day. We are happy to see the quality of the pitch here, the weather is good, not really warm, and we are training at 800 metres high.

Hertha is our next challenge and we asked Dan, one of our analysts, to search for some information about them. Mark had animated each training exercise over these last couple of weeks, created videos about our offensive build-up during the last 10 games of the season. We are four weeks away and many departments take the time to be with us. For example, Mark stayed two weeks and now Dan is here to support us. The power of the image and it’s great they support us so well.