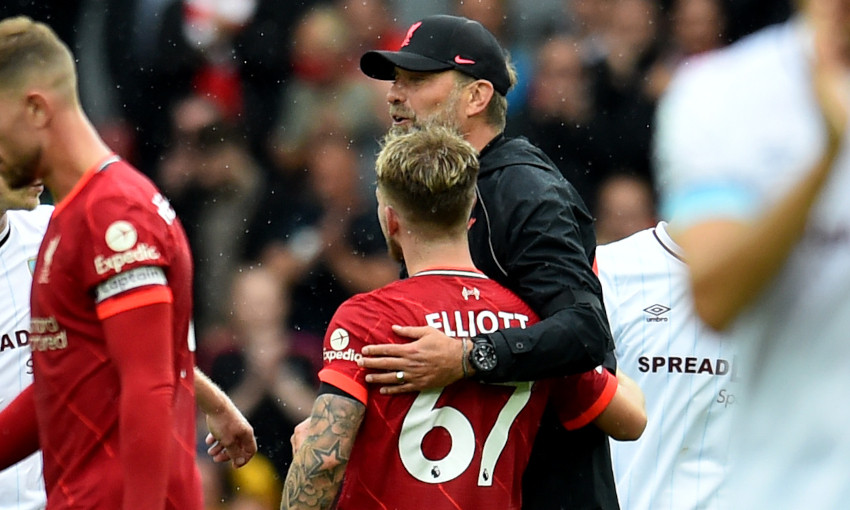 Jürgen Klopp highlighted the roar that greeted kick-off on Saturday as his favourite moment from Liverpool's 2-0 victory over Burnley.

For the first time in more than 500 days, Anfield was operating at full capacity as the Reds made it two wins from two at the start of 2021-22 thanks to goals from Diogo Jota and Sadio Mane.

And asked for his feelings about being able to send his team out at a sold-out Anfield once again, Klopp told Liverpoolfc.com post-match: “Great, great. I was very excited; I am pretty sure my feelings were not different to Harvey Elliott’s, to be honest, even though I am four decades older! Much older, same feelings.

“My favourite moment [on Saturday] of all the moments, because I didn’t hear it for such a long time, was the roar around the first whistle. I would be afraid if this would not have been for us. It is really, really, really nice.

“I didn’t know that I missed it because I forgot it, which is probably normal after 529 days, but hearing that was absolutely outstanding and gave me the last little push, which I didn’t need but I took it anyway.”

The fixture marked a first Premier League start for Harvey Elliott, who in turn produced an assured display from a role within Liverpool’s midfield three.

The 18-year-old is back with the Reds after a highly productive loan spell at Blackburn Rovers last term; however, Klopp admits there was no pre-match pep-talk delivered.

“Not really a lot,” said the boss when asked how much he’d spoken to Elliott about naming him in the starting XI. “Harvey since he is back again from loan again, since pre-season started, just shows up like a proper Liverpool player. That’s how it is.

“Yes, he is 18 years old; yes, there is still a lot to come. That’s all true, but there is already a lot there and I am really happy about that.

“We have more like these kind of private talks, the football talk is more in the sessions – what do we have to do? Everybody in this position should do that, where do you have to be in that moment. On top of that, there are no extra talks and all the rest is private.

“I am just happy to see him enjoying his time in the moment.”