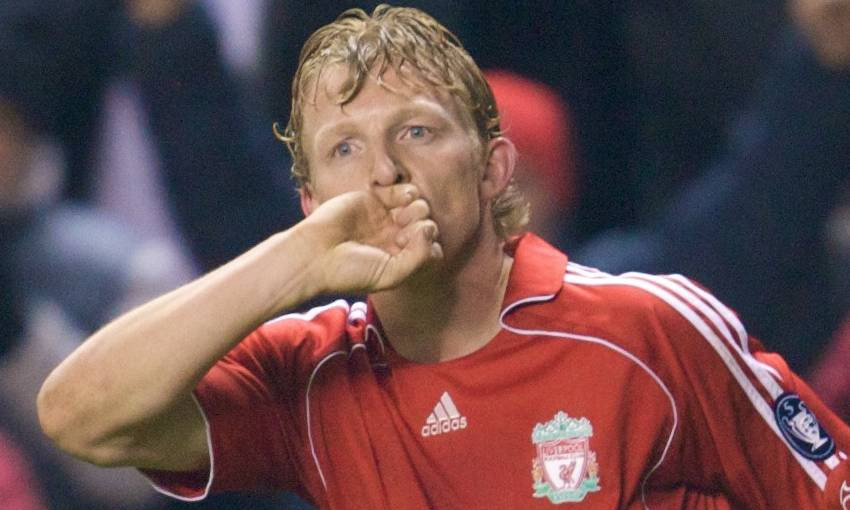 In his latest column on Liverpoolfc.com, Dirk Kuyt analyses Liverpool’s Champions League last-16 draw and shares insight into life as a footballer during the festive period.

Liverpool drawing Internazionale in the last 16 of the Champions League brings back some great memories for me.

We all know about the problems with the draw but Inter were actually paired with AFC Ajax during the initial one. Here in Holland, people began talking about how strong Simone Inzaghi’s side are and them being opponents you didn't really want to draw.

It's certainly a tough one for Liverpool but they’ll still expect to progress if they play to their true capabilities.

I feel it’s sometimes better to start the knockout stages against a strong team. It pushes your team straightaway to be very focused on going as far as possible in competition. When I was at Liverpool and we were flying in Europe, I can even remember sort of wanting to draw those top, top teams.

You play in the Champions League to play against the best teams in the world and on the highest level – that's what it's all about. I reckon that’s how Jürgen Klopp and his players view it, too.

We always had the belief that we could beat any team in the world. I remember when we drew Barcelona in 2007 and everyone thought it would be really tough. But once we had the feeling we could beat the best teams, it didn't really matter about who we drew.

Jürgen's side now are on the highest of levels in European football and they’ll want to show it against the best. I think they'll be happy with the draw.

But, of course, this will be the first time without the away goals rule in the Champions League knockouts – a pretty big change in the competition.

When we faced Inter in 2008, the first leg was at Anfield. We just tried desperately not to concede because an away goal was such a tie-swinging scenario in the Champions League.

I scored in the 85th minute that night – really late in the game, considering Marco Materazzi was sent off for them in the first half. We were just really patient in trying to score. Our thought process was, 'OK, we can score one but we have to make sure we don't concede.'

We would have felt much more confident with a 1-0 win than a 2-1 win. Anyway, Stevie scored an absolute cracker to make it 2-0 three minutes after my opener, but keeping the clean sheet was more important in our minds.

Away goals or not, it's going to be an amazing tie to watch.

Christmas is a time for football

The festive period for a footballer in England is special and absolutely relentless.

Liverpool’s game with Newcastle United on Thursday kicks off a period that’ll see them play five games in just 13 days. It asks so much from the players and does take getting used to.

I don't think anywhere in the world plays as many games as they do in England during this period. But it's something so special to take part in. You just need to be well prepared.

I remember back in the day Rafa always talking to the players about what we could do to prepare ourselves as well as possible. Stuff like what kind of food we needed to eat to recover as quickly as possible, maybe have an extra massage or ice bath. We tried everything to be as fit as possible. And Rafa also sometimes made the decision to not play everyone and change a little bit.

You just try to use all possibilities to get as many good results during a really important period in the season.

I remember I had to adapt to a new kind of world when I first arrived at Liverpool.

Firstly, the packed schedule certainly made buying Christmas presents a bit difficult. In Holland, I was always able to celebrate New Year's Eve. In England, I was in bed at 11pm, ringing my family and friends because they were obviously an hour ahead.

But you’d see the supporters – not just the Liverpool fans but the others as well – and how much they loved watching a game on Boxing Day or New Year's Day. It's tough but certainly special for the players.

My family and friends always came over for Christmas and we’d have dinner. But if we'd be playing on Boxing Day, you couldn't have a glass of wine or anything like that. But at least family and friends were around you and they'd come to watch the game the following day. We always hoped for a home game. You just tried to work around the schedule.

It’s nice to enjoy it from a different perspective now.

@KayethenLFC: What's the best advice you got from a manager or coach?

It was from Marco van Basten, who was my manager for the Dutch national team when I played my first big game for them. He just put a hand on my shoulder and said, 'I don't think I need to give you any advice. I just want to give you one tip: just enjoy these kind of matches because you won't play a lot in your career!' That was something really funny from such a big figure in the game. He said, 'Just don't forget to enjoy it – it doesn't get any better.' Now that I'm retired, you understand that even more. Being a footballer and you're playing every two or three days, you forget to enjoy what you basically love to do the most. Before you know it, your career is done, so you better enjoy it. That's something I'll never forget.

@eoghanos9: Did you like being described predominantly as 'industrious', or did you feel it undermined just how good you were?

You can see it both ways. I always felt very well respected. In the teams I played in, I wasn't the only 'workhorse' because I played with players who always worked their socks off. But just to have the credit that you always gave everything for the shirt makes you really proud. That praise and always being hailed for scoring important goals always left me satisfied.

It was pasta. We always ate pasta and in the beginning you went for bolognese and stuff like that. But at Melwood they always had this pesto pasta and I really loved it. Maybe I'll have to see if they have it at the new training ground in Kirkby.

Thanks for reading again.

Hope you all have a great Christmas.