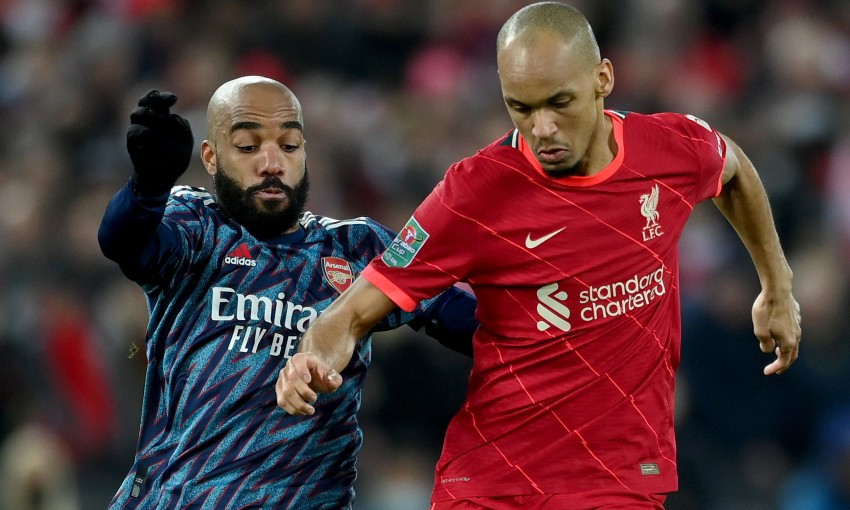 Liverpool were held to a 0-0 draw by Arsenal in Thursday’s Carabao Cup semi-final first leg at Anfield.

It proved to be a frustrating evening for the Reds, who were unable to make the breakthrough despite dominating possession after Granit Xhaka was sent off for fouling Diogo Jota midway through the first half.

Takumi Minamino missed the hosts' best chance of the evening in the final minute as he blazed over at the Kop end.

Indeed, Jürgen Klopp’s team were indebted to Alisson Becker for ensuring they go into next week’s second leg at Emirates Stadium level after the Brazilian made a brilliant second-half save to deny Bukayo Saka.

Klopp made eight changes to his line-up, with only Virgil van Dijk, Andy Robertson and Fabinho retaining their places from Sunday’s win over Shrewsbury Town.

Trent Alexander-Arnold and Alisson - making his Carabao Cup debut - were among those to return to the starting XI.

A textbook example of high pressing from Jordan Henderson, who sprung from midfield to close down Aaron Ramsdale, won Liverpool a corner and ignited the first real spell of pressure on the Arsenal goal.

Minamino - stationed on the left of the Reds’ front three - produced an inviting low cross that appeared certain to be converted by Roberto Firmino, only for the stretching Ben White to make a crucial last-ditch intervention.

Kieran Tierney then blocked a shot from Alexander-Arnold as the hosts threatened to move through the gears, and their cause was aided further when Xhaka was dismissed in the 24th minute.

A raking long pass by Robertson sought and found Jota, who was duly felled by the Gunners midfielder’s high challenge as he looked set to bear down on Ramsdale.

The expected siege on Arsenal’s goal never materialised, however, with Klopp’s team having a near-monopoly of the ball but without troubling Ramsdale.

Alert defending from Joel Matip thwarted Saka in the opening minutes of the second period, with Liverpool then enjoying a sustained spell of being camped deep in Arsenal territory.

Again, though, chances were few and far between.

An inventive piece of play from Curtis Jones, on in place of James Milner, found Robertson, who in turn slipped in Minamino. But the angle was too tight for the No.18, whose shot went wide – and with that the pressure dissipated.

And it was Arsenal who nearly took the lead when Tierney’s pass reached Saka on Van Dijk’s blindside, but Alisson had sensed the danger and sped out from his line to make an excellent, sprawling save.

Klopp looked to provide impetus by making a triple substitution, as Alex Oxlade-Chamberlain, Joe Gomez and Neco Williams came off the bench.

A winning goal could have arrived late on, but Minamino cleared the crossbar with Ramsdale out of his goal and the tie remains finely poised ahead of next Thursday’s second match in London.