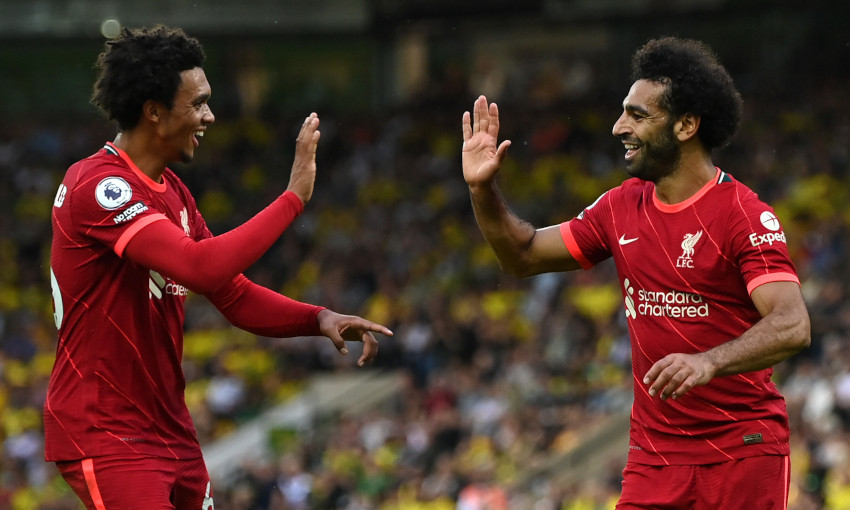 An increased level of freedom and understanding has allowed those playing on Liverpool's right-hand side to flourish even more this season.

So believes Trent Alexander-Arnold, who has predominantly linked up with Jordan Henderson and Mohamed Salah along that flank to significant effect.

Salah has struck 23 goals, including more than anyone in the Premier League, and provided nine assists, while Alexander-Arnold himself tops the division’s assist ranking with 10.

Those contributions have aided a collective effort that sees the Reds still fighting on all four available fronts heading into February.

Jürgen Klopp’s side sit second in the league, are safely into the Champions League last 16, continue their Emirates FA Cup campaign in the fourth round this weekend, and have a Carabao Cup final against Chelsea to look forward to.

Quoted in a recent matchday programme, Alexander-Arnold was asked about his combination with Salah ‘going to another level’ during 2021-22 and the reasons for that.

“We get instructions, of course, but I’d probably say we’ve just been given a lot more freedom on the pitch – and on the right-hand side – to interchange positions and for it to flow,” said the No.66.

“For instance, you might find me inside in midfield and maybe Hendo out wide and Mo as a striker or just rotating all the time. You’ll see Mo sometimes dropping deep and getting a few touches of the ball.

“We understand that we’re both kind of match-winners in our own ways and if we can give each other as much ball and as many opportunities to go and win the game for the team, that’s what we need to do.

“So I’m always trying to look for him in and around the box and give him the ball to let him go and express himself or get involved in the game. In the Arsenal league game, for example, he was laying it back for a cross, or there was the last goal where I got around him and he slid me in down the line and I was able to pull it across for Taki to score.

“So it’s understanding where we want the ball and how we can help each other’s games and, hopefully, take it to another level.”

Salah’s ability as an attacker, and that of his fellow Liverpool forwards, has the knock-on benefit of helping sharpen the skills of the defenders tasked with stopping them in training each day, too.

“Yes, definitely,” added Alexander-Arnold. “The better the level of players you play with and against will always improve your own level because, either way, you have to raise your game to that standard.

“So I do think playing in training against them increases my level a bit as well.”