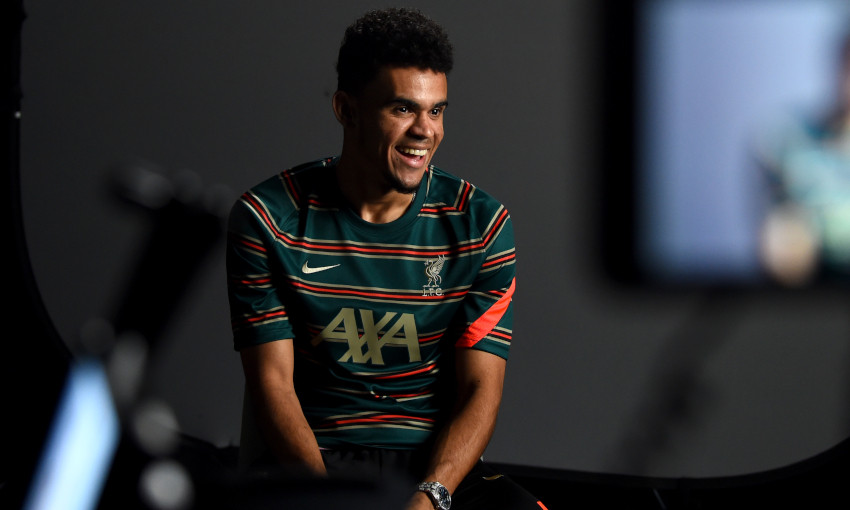 ‘I’m ready to go!’ was the emphatic message from Luis Diaz after he arrived at the AXA Training Centre on Friday to begin life as a Liverpool player.

After a deal was completed to conclude his transfer from FC Porto last Sunday, the 25-year-old embarked upon his first day in his new surroundings following international duty with Colombia.

Diaz touched down at John Lennon Airport around lunchtime and made the journey to the training ground, where he met Jürgen Klopp and his new teammates before undergoing an individual session with the coaching staff.

After his workout was done, our new No.23 sat down with Liverpoolfc.com to conduct his first interview as a Liverpool player and then undertook a photo shoot.

During his chat, Diaz detailed why the Reds were the right club for him, outlined what he hopes to achieve during his time at Anfield, and delivered a message to supporters.

Watch our interview in full here – or scroll down for the full transcript...

Luis, welcome to Liverpool. Tell us how it feels to be here now with your new teammates?

First of all, thanks very much for the welcome. I’m very happy and pleased to be here at this great team and this great club. I’ve not been here for very long but in the short time I’ve had with my new teammates, I’ve shared a few words with some great players and real references at this club. I’m very proud to be meeting up with them, and to now have the chance to play alongside them as a teammate and share a dressing room with them is a great source of pride for me. I’m really happy and content to be here.

You were away on international duty when the transfer was completed. How did everyone react back home?

Back home in my country it’s been like a bombshell! It’s been absolutely crazy. It’s been crazy – una locura like we say over there. I’m really happy at how it’s turned out and that the transfer has gone through. Because it’s a fairly historic moment for Colombian football, and all the supporters there are really happy about it. So too are all my family, my friends and my parents. They’ve all been very happy throughout this whole period. As I say, it’s been totally mad over there and thanks to God everything has managed to come off and the deal has gone through, which is the main thing.

Why was Liverpool the right club for you, then?

Because it’s a club that I’ve followed for a good while now, and I’ve always watched them play. It’s no secret that the Premier League is one of the best leagues around and I’ve followed the football here and watched it since I was a boy. And as for Liverpool, I don’t think I need to say much about them that hasn’t been said. It’s a great club, a real reference in the game, which has won many cups and league titles, and so Liverpool has always been my choice. 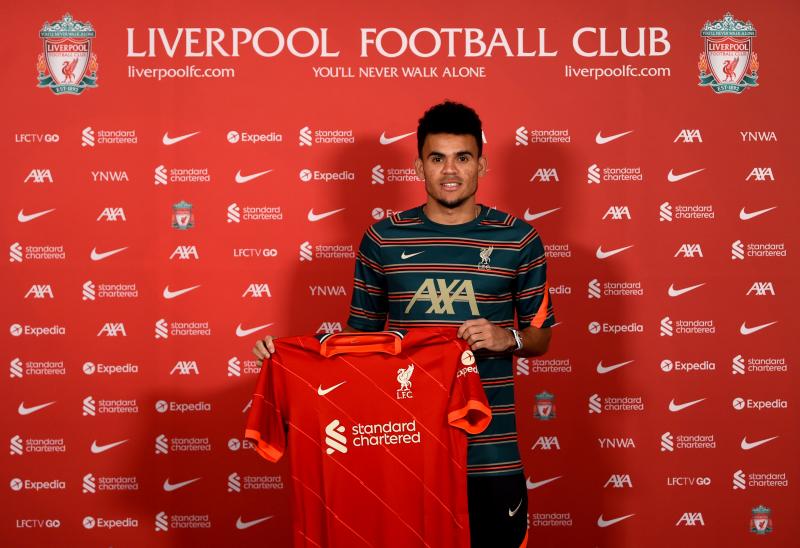 You come in at a crucial stage of the season, with your new team fighting for four trophies. How ready are you to play straight away and make a contribution?

I think right from the word go! I’m committed to being available from today, the very first day I’ve arrived. I’ve already trained a bit today, I was out on the pitch and then in the gymnasium. So yes, my mindset is that I’m ready to help out my team and do my bit and contribute, as you said. I’m available to the manager and his coaching staff for whatever they need me for, and I’ll be ready to go whenever.

Liverpool fans had a good look at you earlier in the season when we played against Porto. Your style looks perfect for this team, is that the feeling you get too?

Yes, for me it is the perfect team and my decision to come here was a little bit based on that. I knew the team’s style of play would be helpful to me, that it would help me a lot. This is an important moment for me and it is all about working 100 per cent because the first thing is being available and being fully match-fit so that I can produce and perform out there on the field.

Jürgen Klopp as a coach, he has a great track record at making top players better. That must excite you?

Yes, absolutely, it does. It excites me a lot knowing that I am going to have a manager of that standing and stature. You could see that for yourself both times we came up against Liverpool with Porto, you could tell he was a good person and that not only on the football side of things, but he takes care of the personal side of things as well. At first it is going to be a settling-in period and a chance to grow alongside my teammates and the manager and his coaching staff. As you say, he is going to help me a lot, so I am really happy to be here sharing that experience with him. Here is hoping that helps me a lot in my career as a professional player.

Pep Lijnders, too, who knows FC Porto so well and is a huge fan of Portuguese football and how they develop players. Are you looking forward to working with him?

Yes, absolutely, I am keen to work with him too. I am keen to work with all of the staff and my teammates. As I said before, the level and the standard here is very high. I respect every one of my teammates hugely. For me, they are absolute superstars in their own team and their national sides. To work alongside a real reference like Pep is going to be absolutely great. 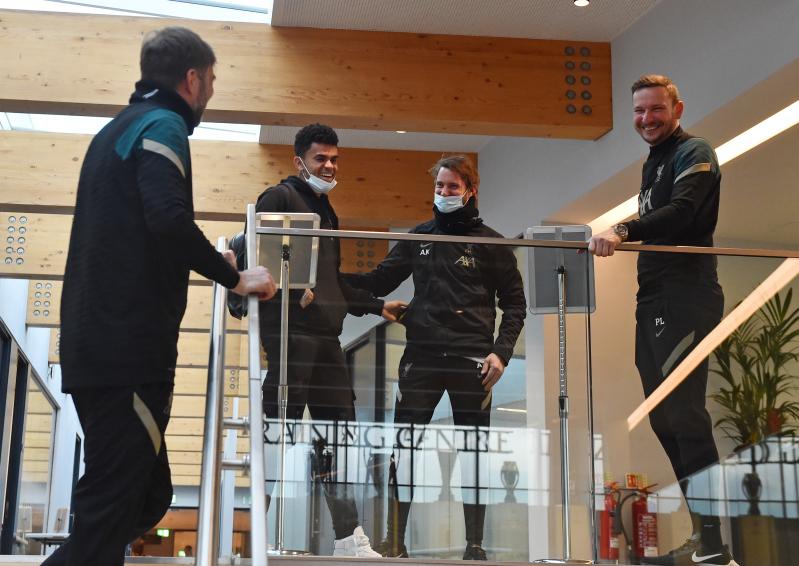 It is a squad used to winning – the Champions League, the Premier League. How often did you get chance to watch us over the years?

Liverpool games, it is hard to say exactly how many I’ve watched – I think I’ve seen about five this season. I’ve seen all of their Champions League games, but I was focused more on Porto during this time. I almost always tried to watch Liverpool’s big games when I could because they are normally involved in the big matches – and the Premier League obviously has lots and lots of important, entertaining games.

You can play in the Champions League for your new club. Have you thought about what one of those nights at Anfield will be like?

I will be really happy when that moment comes around, to be on the field and being able to play in the Champions League at such a big club against other big clubs. It is going to be a really proud moment for me. Being in a packed Anfield too, I have already had the chance to try it before when I came here playing for Porto against Liverpool. You can really feel the atmosphere of how the crowd live for the game. It is going to be, as I said, a really proud moment and a really happy one for me to experience it with the team.

The shirt No.23 has some history here – Robbie Fowler and Jamie Carragher used to wear it, two legends of the club. Does it have any particular significance for you?

The main reason for choosing it is because I used to wear it before in the team where I started out my playing career at Junior Barranquilla. That’s where I took my first steps in the game, so I grew up wearing that number and things went well for me. That is what gave me the idea to choose it again and wear it here. Now, hearing about those big names you’ve mentioned who wore it in the past, it is down to me to wear it well and do my best to help the team and the coaching staff in everything they need from me, being ready to play whenever I’m asked.

So, hopefully it’ll bring you luck because of the history you’ve had wearing it in the past…

Finally, what’s your message to Liverpool supporters and what can you bring to this side?

I think I can bring a lot to the team in terms of my pace and my skill and technique on the ball and ability to dribble. I think they are a couple of my strengths. Also, I can score goals. In addition to that, I just want to send a message to the fans to say hello and if you keep supporting us, like you always have done, I know you’re a great set of fans and I am going to give absolutely everything I’ve got, 100 per cent, to help my team as much as I can and hopefully make you really happy.

Watch: Behind the scenes of Luis Diaz's Liverpool arrival

'Luis Diaz is an excellent signing - he brings even more competition'