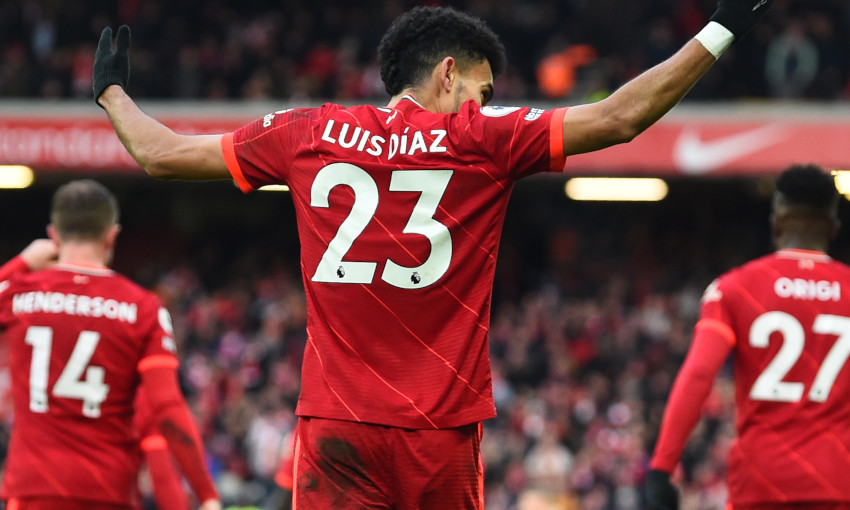 Jürgen Klopp has detailed how Liverpool have allowed Luis Diaz to play naturally in his opening four games for the club, rather than supplying him with detailed tactical instructions.

The forward claimed his first goal for the Reds during Saturday’s 3-1 victory over Norwich City at Anfield, finishing a 34-pass move with a delicate chip over goalkeeper Angus Gunn to round off the afternoon.

It continued Diaz’s impressive start to life with his new club following his switch from FC Porto during the winter transfer window – and the manager used the second part of his pre-Leeds United media briefing to explain why he has been allowed to operate on instinct on the pitch so far.

Elsewhere, Klopp discussed the form of Thiago Alcantara after his outstanding cameo against Norwich and the Premier League title race with Manchester City.

Read on to see what the boss had to say…

On whether Thiago is in his best moment since joining Liverpool...

I am not so sure, I think last season in the last eight or nine games he played pretty consistently in all the games, if I am right, which as I remember it was a pretty good spell as well. We all agree, and Thiago agrees, there were moments when he struggled injury-wise. Then coming back, even with his quality, you cannot get rhythm all the time immediately – you get rhythm, but not immediately always. It's very helpful if you can stay fit for a longer period. It is not too important, if you play the first 60 or the last 30 or 45 or whatever because we have to try to find the right intensity for him. Even when we have now worked longer together, it is obviously not for ages and it is not that we know absolutely everything and that's why we tried to – without keeping him outside when he is ready to play – do the right things and that’s worked out now in the last few games. He is a very, very good player, we were never in doubt about that, his skillset is insane but it is all about staying fit and that’s what we are working on together. 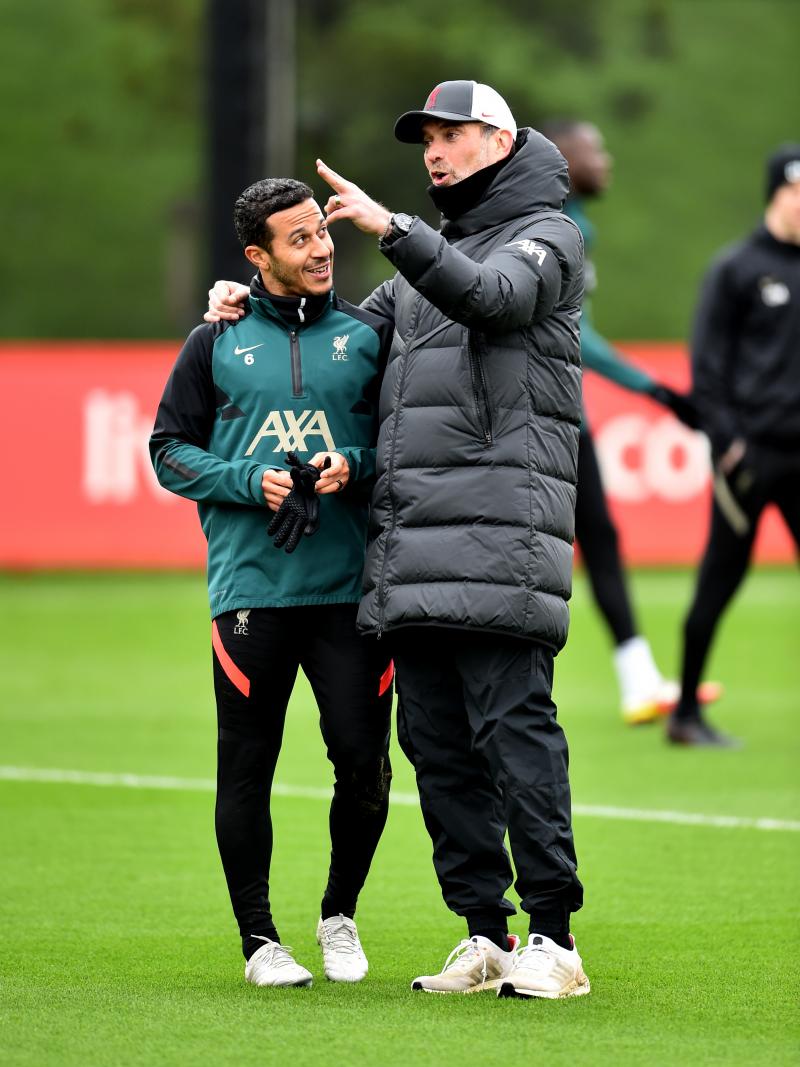 On whether Luis Diaz was sent information on how Liverpool play before he arrived on Merseyside while on international duty...

We usually do it like that, but if the player’s natural way to play is very close to what we do, he only gets a few [bits of] information. For us, it means the way he has to defend, that’s really important because that's definitely different to Porto. His offensive movements they are really naturally like they are now. He had some problems in the first half in the game [against Norwich] definitely because we were not brilliant. There were not a lot of options to play and all these kind of things. We played a completely new front three, even when Mo plays most of the time [on the right], but Sadio in the centre was long ago [he last played there] and a new player on the left wing, that makes it difficult for natural patterns to be obvious. We knew that before the game and we didn’t want to make it worse by giving him pretty much a playbook – 'If the ball is there you go there and if the ball is there you go there' – because you have then to let them be as sure about themselves as possible.

No, we didn't give anything [when he was with] Colombia, we were waiting until he was here. We wanted the player because we saw him playing and we saw it was easy to fit him in with all the things he is doing. He is a really talented player with an incredible work-rate on top of that, so we didn't speak a word to him about counter-press. I am pretty sure he knows it anyway, but you can see he is really in it, full throttle and when you watch our team in a good game a couple of times and you want to be part of it then that’s the obvious thing – and if you don’t do that, you will hear the coach pretty heavily all the time and you don't want to have that, so you just do it.

There will be moments when we have to talk longer and in more detail, but that’s not now because we want him like he is and not directly convert him into what we think he can be in the future. There is time for that, but I am really happy with what he is delivering now and from there we will go.

For us it is, first and foremost, important that we are close to the top, whoever is at the top, because that obviously shows that something is going in the right direction. This year included, in the last four seasons we were one year not around because last year we had our problems and had some struggles. It [has been] going on for a while that both teams are able to do some special stuff, I have to say. With all respect, what City are doing is incredible. I think we are pushing each other as well, not only us – I don't forget the other teams, I don’t forget Chelsea, I don’t forget United, Arsenal, Tottenham and whoever is there. We are pushing each other and that's how it is going a little bit, it keeps you just going; there is no chance to get a bit soft or whatever because the other one will be there immediately to catch you.

I think what Pep said, we are a pain in the lower back, or can be, that’s a good description and that’s how it should be. We try to be as annoying as somehow possible until we have a chance to overtake. I don’t know when that will be or if that will be the case, but what I have always said you have the decisive moments of a season, but it is not now, it is not February, it is March and April rather. You have to be close enough to make a decision in your direction. I don't know if that will be the case because what we do is pretty special and I don’t expect that to happen every week. You cannot turnaround games every week, but we have to be at our absolute best to play the best possible season for us. Only twice a year, at least in the Premier League, we face the other teams. The first one [with City] was a draw where we were not brilliant but good enough to get a point and the next one is not played yet... and we play all the other [teams] as well. We play Tottenham still, we play United as well and all this kind of stuff, so it is not that we sit here and count those points like, ‘Done, done, done’ and then we wait only for the middle of April for the City game.

It is difficult but what the boys did over the past four years is pretty special and I am happy with that, but not overly happy – not that happy that I think, 'OK, that's enough' – we have to go from now on. We all know that so far, it is not a bad season but the decisions will be made later. One decision at the weekend, other decisions even later and we just have to make sure we are always in and around when these decisions will be made.