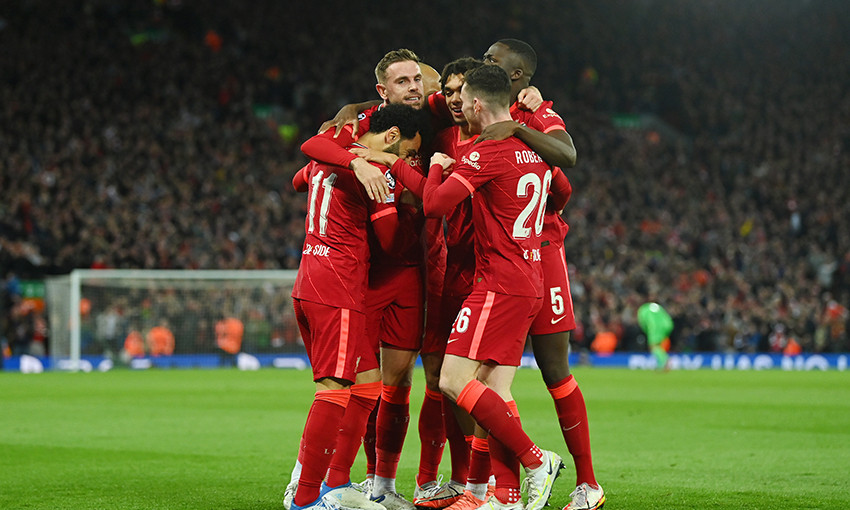 Liverpool produced a powerful performance to defeat Villarreal 2-0 in the first leg of their Champions League semi-final at Anfield.

Just as was the case in the Merseyside derby a few days earlier, patience was required for the Reds, who eventually made their dominance count with two goals in the space of two minutes in the early stages of the second half.

First, Jordan Henderson’s cross looped in via a deflection off Pervis Estupinan, before Sadio Mane prodded past Geronimo Rulli to leave Anfield in raptures.

Fabinho and Andy Robertson also saw goals ruled out for offside during another authoritative display from Jürgen Klopp’s side, who will take a commanding lead into next week’s second leg in Spain.

Ibrahima Konate, Henderson and Luis Diaz returned to the starting XI, with Joel Matip, Naby Keita and Diogo Jota dropping down to the bench.

Powered by a noise befitting the occasion, Liverpool were immediately on the front foot.

Superb link-up between Mohamed Salah and Mane fashioned the Reds’ first sight of goal, but Mane was unable to readjust his body to direct Salah’s cross goalwards.

Diaz was his usual effervescent self and a raiding run inside by the Colombian preceded a fierce low drive that was gathered at the second attempt by Geronimo Rulli.

Villarreal could barely get out of their half and Salah arced a first-time curler over the crossbar before Raul Albiol scrambled to deflect Mane’s volley narrowly wide.

The pressure was unrelenting, and Salah was next to be thwarted by a last-ditch block before the No.11 volleyed Trent Alexander-Arnold’s wondrous first-time cross over the bar.

And, just before half-time, Thiago Alcantara went within a whisker of scoring one of the great Anfield European goals as the playmaker crashed a stunning 30-yarder off the angle of post and bar.

There was to be no respite for Villarreal once the tie resumed and Fabinho appeared to have broken their resistance when he converted Virgil van Dijk’s knockdown, only for the offside flag to be raised.

However, the persistence of Klopp’s team would finally be rewarded eight minutes into the second period.

There was an element of fortune about the opener as Henderson’s cross, seeking Diaz, nicked off Estupinan and deceived Rulli.

Liverpool and Anfield smelled blood and there was no luck involved as the lead was doubled just a couple of minutes later, when a probing sequence concluded with Salah threading a pass into Mane and the No.10 poking his finish beyond Rulli.

Villarreal were on the ropes and, fresh from his derby goal, Robertson had the ball in the net again, but he had strayed offside prior to volleying home from another sensational Alexander-Arnold delivery.

The tempo dropped slightly thereafter, although there was still time for Van Dijk to sting Rulli’s palms from range and Diaz to see an attempt deflect just wide.

The hosts’ work was done, however, and they are now well placed to reach a third Champions League final in five seasons.