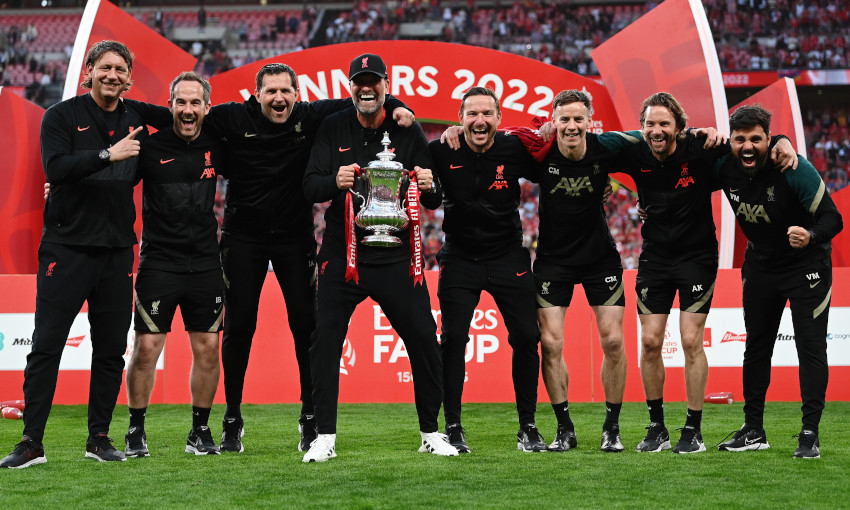 Jürgen Klopp hailed the 'special' feat achieved by his Liverpool players after they lifted the Emirates FA Cup by beating Chelsea 6-5 in a penalty shootout on Saturday.

Kostas Tsimikas converted the decisive spot-kick in the Wembley final to clinch the crown for the Reds following Alisson Becker's save from Mason Mount in sudden death.

The penalties followed 120 minutes of tense, hard-fought and, ultimately, goalless action in the capital in a repeat of the Carabao Cup final nearly three months earlier.

Read on for a full transcript of Klopp's post-match press conference after his side secured the club its eighth FA Cup...

That we could make it is absolutely out of this world, it's unbelievable, it's massive, it's game number 60 or whatever in a very, very intense season, and putting out a performance like this is absolutely incredible. But most important – really most important – I have to say all respect to Chelsea. What a team, what a performance, in the end we all know a penalty shootout is a lottery. But we did it again. We work together with a company – four guys, their name is Neuro11; I got in contact with them two years ago I think, got aware of it. One of them is a neuroscientist and he said, 'We can train penalty shooting.' 'Really?' I said, 'Sounds interesting, come over.' German guy, we met, we worked together and this trophy is for them obviously as well, like the Carabao Cup was.

Sadio's penalty is for sure at least 50 per cent my responsibility because you have to let the boys do what they think they do, but with him I said, 'He knows you exactly, the goalie, so do the other way around.' How very often in my life, I realised it's better to shut up! But we still made it and honestly it means the world to us. It's massive. It was difficult. The first 25 minutes were the best 25 minutes we played ever against Chelsea, we played an incredible game, but we didn't score.

Then it's clear, Chelsea with the quality they have, they find a way back in the game, they did that. There were like ups and downs in the game; they had their chances, we had massive chances, none of us used them. So a penalty shootout is a logical thing. Doing it like this, feels good but gives you more a sense of how hard it must be for the opponent, because it would have been extremely hard for us in that moment after 120 minutes, losing like this. So, honestly, my respect to Chelsea and what they did.

On the players' relentlessness, with a quadruple still a possibility…

Look, I said before that the quadruple thing, it's absolutely outstanding that we can talk about it. Crazy. But we sit here now, it's already 20 past nine and we play on Tuesday night against Southampton. I have no clue – really no clue in this moment – who I can line up on Tuesday. I think we will have to make a few changes. And then we will go there, probably the last home game of the season for them. They don't want to lose their last home game and that will be incredibly tough. So the quadruple is 'on' if you want, but off as well because of the situation we are in, that's how it is. But that's not important in the moment, to be honest.

That we won now both domestic cups, that really is special. That Trent Alexander-Arnold is the youngest player ever in this incredible history of the Premier League who won all six major trophies, at 23, the youngest. So many special stories. And after the game I said to Thiago, if I would have known what a player you are, I would have signed you four years earlier. He said, 'You taught me running!' I take that, it's fine. He could obviously already play football pretty well but he learned running in Liverpool, that's fine.

So many special stories, Jordan Henderson obviously and these kinds of things. It's really cool. James Milner, at a quite advanced age having such an impact on a football team. Let me say, we had to change Mo early, which was not cool. It was my decision, it was pretty cautionary. Mo said, 'I feel something, I can carry on.' I said, 'No.' A football game is not a perfect physiotherapist, it means it rarely gets better during a game. Then Virg stands with me and says, 'I feel something but it's fine I think.' We make a decision together, so he stays on but was clear when we didn't make it in 90 minutes he has to go off. Then you can bring Diogo Jota and Joel Matip in this moment – that's the best situation I've ever been in as a coach, to be honest. That's absolutely outstanding, that's why we had the chance to go for it. It was difficult, we know that. It was lucky, we know that. But we deserved it as well and that's really cool.

On the win having a 'transformative effect' mentally and physically...

It does. The best physiotherapist is winning football games, to be honest. Robbo had a cramp, so that's obviously normal and completely fine. I was surprised that more players didn't have cramp, to be honest, after what we had to do tonight. So before you are in a situation, you never know exactly how big it feels. It feels massive. I cannot believe it. It feels massive. The only problem I have is that we cannot really celebrate it because we play on Tuesday. I think, 'How can you do that?' It's such a fantastic competition, such a fantastic occasion and then you limit the celebration – OK, obviously not for the people, they can do what they want – but for the team by putting in a game on Tuesday. It is like it is and from here we go. I have no idea what we can do but tomorrow morning I will probably get more information about that and then we will see.

What a boy, what a story, what a player – but he should have scored! I think we agree, he agrees probably. So the speed he has is insane. Not to forget, he played on the side of Chalobah and Reece James and getting in a situation like this is absolutely unlikely. The big chance he had in the first half, I think it was a pass from Trent – if you want, we can talk about his performance as well, by the way – and he should have scored in that moment with his quality. That's how it is. But what a player. He's outstanding. He's a fantastic boy. It's so funny, so we hug each other after the game and just shout vamos and whatever, the few words I know in a similar language. It's so funny. But he gets our football 100 per cent. We thought we saw that at Porto but that it's really like this, I feel really lucky as well, to be honest. He fits like a glove to our football and that's really, really special.

On where he ranks this team in the history of football...

I don't have to make this decision and I don't have to judge this and have to think about that. Other people have to do that. I couldn't care less, to be honest. I enjoy the moment with these boys. We are so incredibly close with each other and with our fans, it's a pure joy to be part of this club in the moment. There's a lot to come and a lot to play, we all know that. But for tonight I decided to take that and just enjoy this moment and don't think about the next challenge we are facing. Because it's really special, it's really special. Imagine, like 20 years ahead and then you look back... Jordan Henderson is probably then a pundit or maybe not even a pundit anymore because he thought that makes no sense anymore, so in 20 years then you think, he's the captain of the only Liverpool team so far – hopefully not the only because maybe we can do it again, which will be completely ridiculous – but he was the first captain who won four trophies, as an example. The Trent story, all these other stories, where Virgil van Dijk was six years ago and stuff like this in his career where he thought, 'Where will it go?', the player he is, all these kind of things. When we go five years back, Ibou Konate played probably played in the U16s of whatever team in France. And now we are here for this moment.

We don't finish, it's just now for the moment a little reflection. But we don't have to decide where this team ranks. I know a few players of these teams but I cannot say how they played. But I'm pretty sure in the time when they played, they were the best teams. But meanwhile, we know so much more about training, we know so much more about sports science, all these kind of things. That's why these boys are obviously much fitter than the former generations were, it's nothing to do with football talent or whatever. If the players from the past, like Rushy or Kenny, if they would've been trained like the boys are trained today, imagine that? That would've been crazy. So, it's all good for the moment. We don't stop here, we just take the time to enjoy it for a few minutes.

On trying for the quadruple...

So I'm not 100 per cent in the subject but let me say it like this, City's in this moment three points up and seven goals [ahead on goal difference] and now they win tomorrow, with all respect to West Ham – of course West Ham can win against City, it's a massive game – but they win tomorrow 4-0, then it's six points before we start at Southampton and then we have to win both our games, they have to lose a game. It's silly. So, let's just see what happens tomorrow. If they lose against West Ham, then I start thinking. But if they don't, then we will judge that and will go from there. So far this Premier League season, the second part of it, my boys drew against Chelsea, against City, against Tottenham and won all the other games – OK, two to come obviously, we don't know what will happen. It's an insane second part of the season. If it's not enough in the end, we have to congratulate City and that's how it is and then we go from there and will try it again and these kind of things.

We drew twice against City, so we didn't lose points there. We lost them somewhere else, so we have to make sure that next year we either beat them or draw against them and win more of the other games. That's the situation. But we came from a season last year where nobody thought, I'm 100 per cent sure in this room nobody thought, apart from me maybe, that we can go again like we did this year. That we could do it is all because of the character of these players. It's the only reason. Because I can say whatever I want, I can motivate as much as I want, if these boys don't listen, if these boys are a little bit distracted by whatever or get weak or soft or whatever, then in this moment you don't have a chance in this league, competing with Manchester City. So, we will see what it means. But today is FA Cup and we won the game and we obviously have the medal, a wonderful T-shirt. That's enough for the moment.