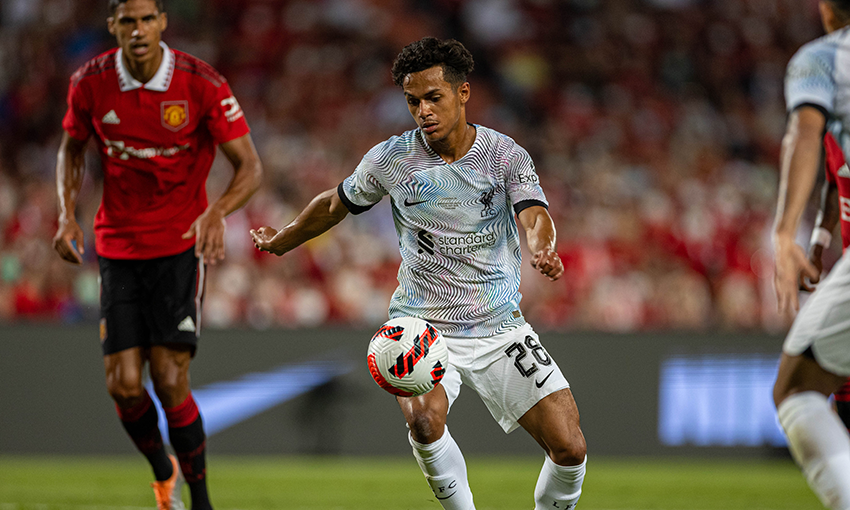 Liverpool’s first friendly of the summer ended in a 4-0 defeat to Manchester United in Bangkok.

A total of 32 players – including debutants Fabio Carvalho and Darwin Nunez – got valuable minutes in front of over 50,000 passionate supporters at the Rajamangala Stadium, where the fact United began their pre-season programme a week earlier than the Reds showed in terms of sharpness.

Carvalho was named in a starting XI that blended the experience of the likes of Alisson Becker and Jordan Henderson with the youth of Academy prospects such as Luke Chambers and Isaac Mabaya.

Nunez, meanwhile, came off the bench in the 61st minute, with Diogo Jota the only senior absentee from the matchday squad as he continues his recovery from a hamstring injury.

Harvey Elliott and Luis Diaz were bright from the off and the Colombian forced David de Gea to make the first save of the evening early on.

But, soon after, United went ahead when Jadon Sancho slotted in the loose ball once Liverpool had failed to clear Bruno Fernandes’ cross.

The Reds should have levelled within minutes as Carvalho and Diaz each hit the post in quick succession following a counter-attack heavily involving the new arrival and Elliott.

United duly doubled their lead through Fred’s delicate chip, with the 10 changes made by Jürgen Klopp on the half-hour mark leaving Alisson as the only starter to remain on the pitch. It was quickly 3-0 as Anthony Martial dispossessed Rhys Williams before clipping his finish over the No.1.

With Adrian having replaced Alisson at half-time, Klopp made another 10 outfield substitutions with an hour played. Nunez was joined by teammates including Mohamed Salah, Thiago Alcantara and Virgil van Dijk in coming on.

Trent Alexander-Arnold was straight into the action, the right-back seeking to deliver a trademark, drifted long pass over the United backline for Nunez to latch onto, but De Gea to narrowly beat the Uruguayan to the ball.

Nunez had the first shot of his Liverpool career as he chested down Andy Robertson’s delivery and half-volleyed towards the far corner, only for Tom Heaton to parry the attempt away.

Facundo Pellistri then finished off a United breakaway to make it 4-0 and Liverpool were again denied by the woodwork late on as Salah curled a brilliant effort off the post, before Nunez blazed the rebound over the bar.