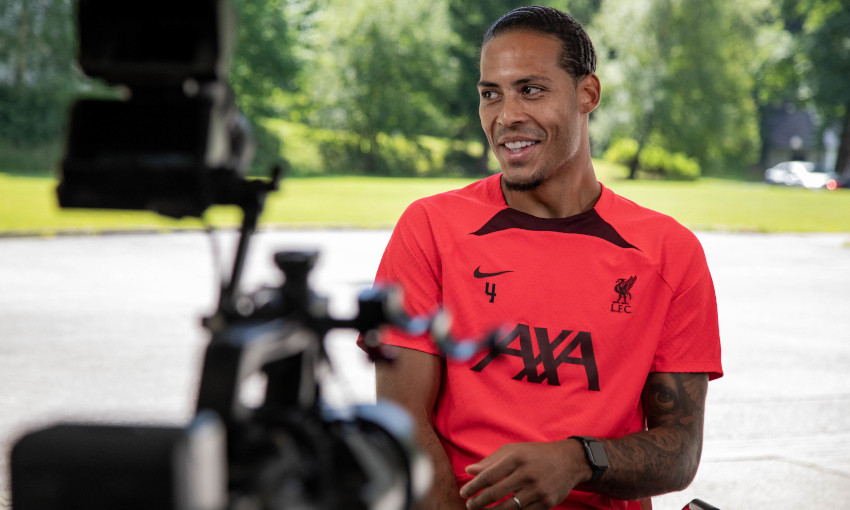 A genuine mutual support for each other is the key to the success of Liverpool's central defensive group, explained Virgil van Dijk.

Jürgen Klopp had the luxury of selecting two from Joe Gomez, Ibrahima Konate, Joel Matip and Van Dijk at the heart of his backline for the majority of last season as the Reds won two trophies and finished runners-up in two more.

Each of the quartet are close-knit friends with the others off the pitch, a factor that proves hugely beneficial to the team when they step onto the field in tandem.

As does their understanding approach to the competition of tussling for a pair of positions in the XI, with a unified focus on high performance their top priority.

“It’s quite special to have these boys around and also as partners around, full of quality,” Van Dijk told Liverpoolfc.com during an extended interview at the training camp in Austria.

“Different qualities, each and every one of us, but we complement each other very well.

“The relationship we all have together is also a very big thing; we really enjoy the hard work and we all want the same goal and that’s winning games.

“Whoever is playing, we support each other, in every single competition. That’s key to success, so hopefully we can keep that going.”

Gomez ensured his membership of the collective will continue into the forthcoming years when he signed a new long-term contract with Liverpool earlier this month.

It was a decision he had previously discussed with Van Dijk, who was naturally delighted to see the No.12 put pen to paper – for himself and for the club.

“We spoke about it before he signed the deal and I’m just very happy that he’s staying at the club, staying with me. Also I’m happy for the club that he’s signed,” said the Dutchman.

“He is, in my opinion, [one of] if not the best English centre-back around. Obviously we’ve both been very unlucky with the injuries we had. Obviously his time will come again and hopefully this season he can show that.”

Konate, of course, arrived as a new addition to the defensive ranks last summer and earned plenty of praise for his performances over the course of 29 appearances.

Now a senior France international, the 23-year-old is another player with whom Van Dijk has swiftly established a friendship, and he anticipates more to come from Konate as he develops.

“He’s a very, very good player,” he said. “What I like the most about him is the will to learn each and every day as well.

“Obviously there are loads of things that can improve – and that’s good because he has time, he needs the experience. In my opinion, experience is a big thing for a centre-half to learn and to take with you.

“But I can say that about the other two [Gomez and Matip] as well. We are very blessed as a club and I am very blessed to have these players around me as well.”

The currently ongoing pre-season is markedly different for Van Dijk to a year ago.

Last summer the No.4 was taking careful but steady strides towards a full return from a serious knee injury that had ruled him out for the large part of 2020-21.

He would go on to achieve that comeback in typically assured and commanding fashion, starting 51 of the Reds’ 63 fixtures and being named in the PFA Premier League Team of the Year.

This time around, Van Dijk can build towards the new campaign on a firmer footing, though with the same desire to hit his absolute peak condition.

“I will still be under the microscope and that’s fine,” he said. “That’s something I’ve created myself.

“But it’s definitely a different feeling in this pre-season. Last year, coming back from the injury, so you’re trying to ease your way back in. This year, you try to get as fit as possible as quickly as possible.

“The pre-season is quite short; we have a big game obviously next week coming up. But I know myself, I know my body and I know what I have to do in order to be ready for the season – that’s what I’m trying to do each and every day.”

When the intense sessions are completed, there is of course the opportunity for some downtime and team bonding, with initiation songs for new recruits a regular feature of pre-season training camps.

Having joined in January 2018, Van Dijk thought he might have avoided having to perform on the mic, but he obliged the following summer.

Asked if he remembers the occasion, he replied: “I do, yes. I did an RnB song called So Into You by Fabolous. I tried my best.

“I obviously joined in the winter and I did the song in the summer. I thought I was going to be over it, but I was the first out of the hat and had to do it. I did the show and I was happy that everything was done.”

A week later, Liverpool’s Premier League season gets under way as they travel to face newly promoted Fulham at Craven Cottage.

Nowhere near sated by the accomplishments of the last campaign, they are set to approach 2022-23 with the same winning mentality.

“Everyone was disappointed in the end [last season]; coming that close but not close enough by winning those two other trophies,” added Van Dijk.

“We start the year, every year, trying to win every game ahead of us and that’s not going to be any different this year. We’re going to give it a go. We know how tough it’s going to be.

“We need everyone; we have a good squad at the moment so hopefully there are no major issues, no major injuries coming up and everyone can hopefully be part of a great campaign.”