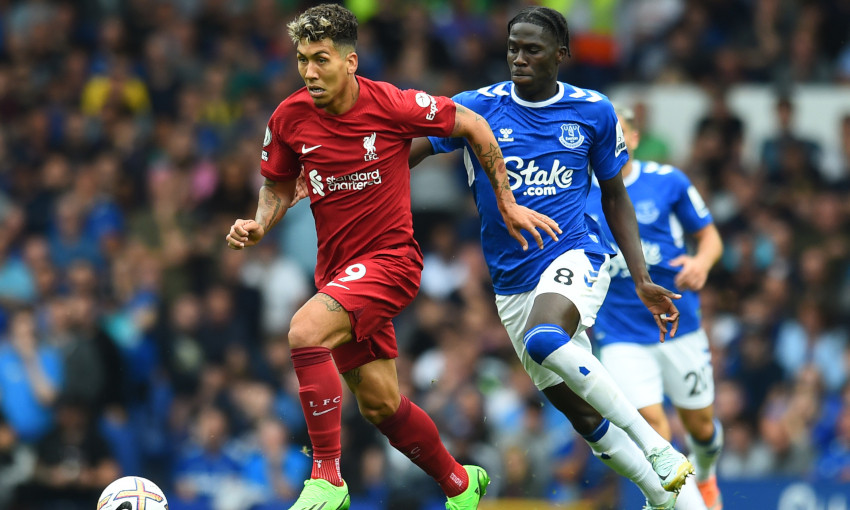 Liverpool were held to a 0-0 draw by Everton in Saturday’s Merseyside derby at Goodison Park.

Both sides had chances to nick the three points in a typically frenetic clash between the city rivals, with Conor Coady seeing a second-half goal disallowed by VAR for offside and Mohamed Salah striking the foot of the post in the 96th minute.

Darwin Nunez, Luis Diaz and Tom Davies also hit the woodwork in the first half, while Alisson Becker and Jordan Pickford each made crucial saves to preserve their respective clean sheets as the 241st derby ended all square.

Nunez was restored to Liverpool’s line-up ahead of Roberto Firmino as one of three changes made by Jürgen Klopp, with Kostas Tsimikas and Fabio Carvalho also starting in place of Andy Robertson and Jordan Henderson respectively.

New loan signing Arthur Melo was named on the bench, alongside the returning Diogo Jota.

Amid a frenzied atmosphere, Liverpool settled quickly into an early rhythm of territorial dominance and, following a corner, Tsimikas hit a low drive from the edge of the box that was blocked.

Everton were content to play on the counter and Neal Maupay wasted a presentable chance after a Reds move had broken down, the forward dragging a close-range effort wide.

With nine minutes on the clock, both sets of supporters united in applause in memory of Olivia Pratt-Korbel, with a banner reading 'Enough is enough' displayed across the divide between the fans.

A frantic opening 20 ended with a sprinting Trent Alexander-Arnold digging out a superb cross from the byline and Nunez climbing above Nathan Patterson at the back post, only for the Uruguayan to direct his header wide.

Either side could have taken the lead within an end-to-end passage of play midway through the half.

Having saved Anthony Gordon’s strike after an Everton corner, Alisson launched a breakaway that the Reds failed to maximise as Nunez was unable to locate Salah or Luis Diaz, who had overloaded the right flank.

Davies then struck the post on the rebound once Virgil van Dijk had thwarted Maupay with a last-ditch block, before Liverpool went agonisingly close themselves – not once, but twice.

First, Nunez showcased stunning technique to chest down Joe Gomez’s lofted pass and volley goalwards from a tight angle all in one fluid movement, only for Pickford to tip the attempt onto the crossbar.

Diaz reacted quickly to seize the rebound and cut inside before bending a shot off the angle of post and bar.

Firmino was brought on for Carvalho ahead of the second period, which Liverpool began brightly.

Nunez twice had sights of goal, the No.27 first scuffing his shot from Diaz’s cutback and then seeing a volley saved by Pickford – efforts that sandwiched an opportunity for Tsimikas, who side-footed over the bar from a challenging angle.

Klopp again turned to his bench just before the hour, the boss opting to change in both full-back positions as James Milner and Robertson replaced Alexander-Arnold and Tsimikas, and soon after the derby ignited.

Firmino was twice denied by Pickford in quick succession, before the Everton goalkeeper shovelled a low hit by Fabinho wide amid a flurry of Liverpool corners.

The last of those set-pieces nearly ended in an Everton goal, only for Alisson to intervene with a brilliant save as Maupay looked set to round off a counter with the opener.

The home team thought they had broken the deadlock in the 69th minute when Coady nudged Maupay’s cross/shot over the line, but the defender was adjudged to have been offside following a lengthy VAR review.

Jota’s introduction added impetus to Liverpool’s attack but Alisson was again required to keep the visitors on terms, the Brazilian readjusting himself to claw Dwight McNeil’s deflected attempt over.

Late Liverpool pressure followed, with Firmino denied again by Pickford before Salah’s low, first-time hit came back off the inside of the post deep into stoppage time as the points were shared.