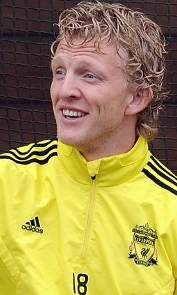 Dirk Kuyt believes his incredible work ethic is in his genes.

The Reds' No.18 credits his industrious performances to his DNA and reveals that had he not chosen a career in football, he'd now be netting fish instead of goals.

"Where I come from people work really hard," he told LFC Weekly in an exclusive interview this week.

"My dad did everything to take care of the family. He would spend weeks on end in the North Sea, come home for three days, then go again.

"It was tough and similar to those experiences of other families. To give everything is something that has always been in me.

"I started playing when I was three years old and at 14, my dad said, 'You have to choose...you can play football every week or you can be a fisherman...away at sea where you cannot play football at all.' It was tough but I loved football so the decision was made."

Kuyt also credits the impact Kenny Dalglish has made since taking over the reins, particularly when it comes to promoting from the club's youth ranks.

He said: "In my opinion, first of all to give these young lads the chance is really positive...for the players, the fans and the club itself. It proves there is continuity... a future. Yes, it would be good if we sign some top players, but having youngsters here that are good enough will only make the squad a lot stronger too."

The full Kuyt interview, plus a chat with Fabio Aurelio in which he reveals why it's good to have Andy Carroll for the visit of Newcastle this weekend, are in this week's LFC Weekly.