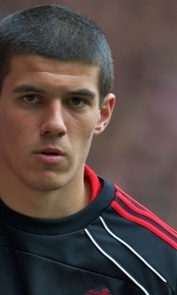 The view from Newcastle

Warming up in front of the Kop, losing 4-0 at Everton and training with the first-team - this and more in our latest Academy column with U18s captain Conor Coady.

It's obviously been a very disappointing week for the U18 team.

We went to Everton on Tuesday confident we could get the three points that would go some way to seeing us win Academy League Group C.

It didn't quite work out that way. We found ourselves 2-0 down early on and when they got the third just before half-time, we knew it was going to a be a big-ask to rescue something from the game.

I felt we improved after the break but still didn't do enough and they got a fourth late on to round off their victory.

It's always hard when you get beaten like that but it's especially tough to take when it's your local rivals.

We need to get it out of our systems quickly because there's another massive game at Sheffield United on Saturday.

We know we still have a chance of winning the league. It'll be a massive game in Sheffield because they have reached the Youth Cup final this season so they are going to be a strong outfit.

We need to play with a lot more desire and get back to playing the type of football that has seen us do so well this season.

We will probably have to win our remaining three matches to finish top but we have the players capable of doing that. We just have to take it game by game and give our all every minute we play on that pitch.

Rodolfo (Borrell) will have been hurt by the defeat as much as any of us but he will also know the importance of bouncing back. He'll have been on at the lads to puff their chests out and he'll have been doing a lot of work on the training pitch to make sure that it doesn't happen again.

The Mini derby loss also means it's been a bit of a mixed week for me on a personal level.

I was on the substitutes' bench for the first-team's win against Birmingham City last Saturday and that was an incredible experience.

It was the first time I had been named as a sub for a game at Anfield and I loved every second of it.

I only found out about it two hours before kick off and I was buzzing all the way through the pre-match warm-up.

It's every young lad's dream to be stretching in front of the Kop. I can't put into words how I was feeling as I ran up the touchline. You could hear the fans clapping and shouting words of encouragement. That was just incredible. I'd love to have got on in the last few minutes but it wasn't to be. I've just got to keep working hard and try to impress so that I get another chance in the future.

I know it's been said over and over again but Kenny (Dalglish) has lifted the club so much. He's got us all pulling in the same direction and the Academy lads now feel like he will give them a chance. That's brilliant to know.

You only have to look at what John Flanagan and Jack Robinson have done in recent weeks. If you are good enough, you are old enough and that's really positive for anyone looking to make the grade at Melwood.

I've actually been training with the first-team again for most of this week but there was obviously the low point of the U18s' defeat against Everton.

I've not had much chance to get in and around the lads in the U18s to help try and lift the mood as a result of that and I don't know whether I'll be involved in the Academy match or with the first-team against Newcastle.

Either way I'll be ready to give 100 per cent. Hopefully both teams will pick up the three points and end the week in the best way possible.

Conor was speaking to Paul Hassall