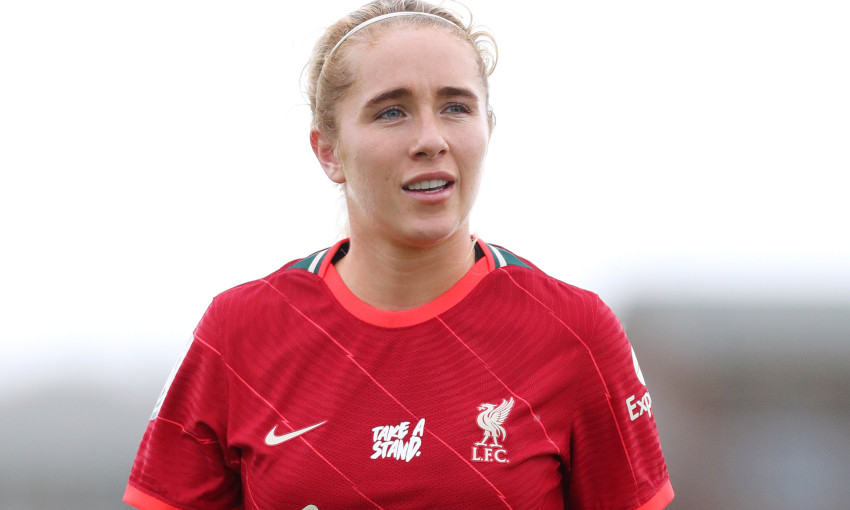 Photos: LFC Women in training ahead of season opener

After joining Liverpool FC Women’s youth academy at a very early age, she made her big breakthrough last campaign and went on to be named Standard Chartered Women's Player of the Season for 2020-21.

Kearns was also named fans’ Player of the Season and then signed a new contract with her club.

“For me to represent Liverpool FC is a big thing,” the Scouser tells Liverpoolfc.com. “My family support the club, I’ve supported the club since I can remember and I still can’t believe I play for Liverpool! It’s an honour really.”

As a youngster, Kearns played alongside a certain Curtis Jones. The pair have since followed a similar path on their journey with the club so far.

“We played for the same football team, Mossley Hill,” she reveals. “It was an all-boys team and I was the only girl!

“We were only six or seven and it was great. Curtis had the Cristiano Ronaldo haircut back then and he was the same player that he is now – confident and loved to get on the ball.

“We both joined Liverpool around the same time and it’s great to see he’s doing so well and we’ve come so far together.

“It’s brilliant that one is on the male side and I’m on the female side, and we basically have had the same journey and it’s good to see. I’m absolutely made up for Curtis to see him part of our first-team squad.”

The goal for Liverpool FC Women this season is promotion back to the Women’s Super League.

The last campaign was a challenging one but Kearns believes the team are ready to show what they are capable of in 2021-22.

Beard has brought in eight new faces during the close season and hopes are high that this could be a campaign to remember.

She says: “I can’t wait to get started. We’ve had a good pre-season and we are all ready to go now.

“We are starting to gel together as a team and in the formation Matt wants us to play, so we are really excited and it’s time to get to work.

“All the new players have settled in well. I think they have all brought different things to the team and they are all nice girls. We are quite a close squad which is good. It’s strengthened us and we want promotion.

“Last season was a bit of a shock to us, to be honest. A lot of us are more experienced now in this league which I think will help us and we know what we need to do.

“We are more ready this season. Last season we had a bit of a chip on our shoulder with what happened with the relegation but everyone is over that now. We know where we want to be and we want to make sure we get there.”

Sunday’s season opener kicks off at 2pm BST. A familiar face will be in the London City Lionesses team in Amy Rodgers, who came through the youth ranks at Liverpool with Kearns.

“It’s going to be a tough game and most teams in the FA Women’s Championship have strengthened now and it’s not going to be easy,” Kearns stresses.

“London City Lionesses have a good squad and they have players like Amy who we all know very well. So it’s going to be tough but we are ready and we need to perform and get the three points.”

The added bonus for the Reds on Sunday will be the return of supporters to Prenton Park.

“We can’t wait to see them on Sunday and we’ve missed them so much,” Kearns says. “The atmosphere they bring really inspires us as a team. Last season it was so quiet and sometimes you need them to get you through it.”

The 20-year-old is excited to be working under Beard for the first time and believes he is the manager to take her game to a new level.

“When he was manager in his first spell, I was an U11 player and I was also a fan,” she recalls.

“I met him when we had a presentation evening and I am absolutely made up to be working with him because he can take my game to the next level.

“He is helping me with my weaknesses and I’m working on them now, so hopefully if I get that nailed on the head I can get to the next level and make my game better.

“He’s a good coach, he knows how to deal with players and the information he gives you is very good.

“I just want to keep making sure I perform as good as I can and if the team can perform as well, I feel we can do well and that’s what it’s all about.” 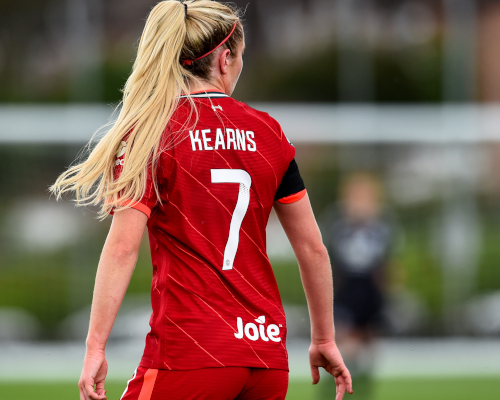 Kearns has also changed her squad number this season from No.21 to the famous No.7 – and it was all down to her new boss.

She details: “Matt phoned me and asked did I want to wear the No.7 jersey this season. I said, ‘That’s a winger's number!’, and he turned to me and said: ‘Kenny Dalglish wasn’t a winger, Luis Suarez wasn’t a winger.’

“So I said, ‘Alright then, I’ll take it!’ So that’s how it happened really and it’s an honour.”

Some of Kearns’ displays last term led to interim manager Amber Whiteley and the squad giving her the nickname ‘Bo Salah’.

“It’s stuck now and everyone is calling me it!” she laughs. “The players call me it in training every now and again when I do a few step overs. It’s nice though and I take it as a compliment.

“Mo Salah is absolutely flying for the men’s team, so if you are compared to someone like that you’ve got to take it, haven’t you?”

A major part of Kearns’ game is threatening delivery from set-pieces, which has provided a valuable source of creativity for the team.

“I love taking them,” she finishes. “It’s just been something I’ve always done from a young age, even in the garden I was taking free-kicks all the time.

“I’ve always taken corners and I’ve been working on them a lot in training, and I think you can never get perfect at them. The more you do them, the better you get at them. Quality of delivery is important and you’ve got to take them opportunities.

“It was great to get on the scoresheet as well last season, so hopefully I can get more goals this season.”