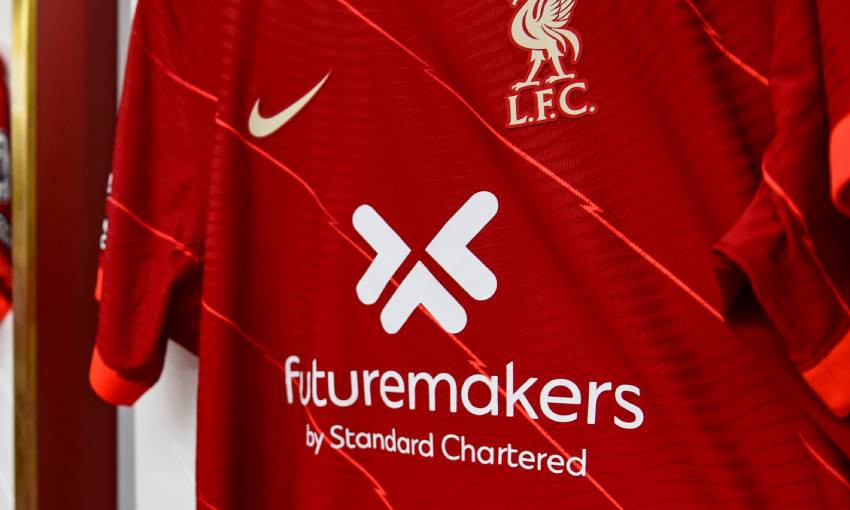 Liverpool FC Women will be wearing a unique set of shirts when they take to the field on Wednesday night for their Continental Tyres Cup fixture against Aston Villa.

The fixture at Prenton Park will see LFCW adopt ‘Futuremakers by Standard Chartered’ as their front-of-shirt logo for the very first time.

This global charitable initiative supports disadvantaged young people, especially girls and people with visual impairments, to learn new skills and improve their chances of starting their own business or getting jobs.

This year’s campaign pays homage to the mentors who have inspired the players, and many of Matt Beard’s squad will have shirts bearing messages from their own mentor – their very own ‘Futuremaker’.

Midfielder Missy Bo Kearns will wear a shirt bearing a message from former world champion boxer Liam Smith, a family friend who has always encouraged her in her football career.

In turn, Kearns gave Smith an LFC shirt with her own message of support to him ahead of his successful ‘Battle of Liverpool’ super-welterweight bout against Anthony Fowler last Saturday night.

Kearns told her mentor: “I remember there was a fight where you were cut early in the bout and you had an attitude that said ‘You’re not beating me today!’ I use that in my football if I get a knock early in the game.”

All the one-off shirts will be signed by the players and available for supporters around the world to bid for in an auction to raise money for Futuremakers here. Bids must be placed by October 24.

Liverpool's men’s side have been involved in the campaign since 2012 and this year wore the Futuremakers logo in their recent clash with Manchester City at Anfield.

“This year is even more special because it marks the first time we are partnering the women’s team on the logo swap.

“We share the club’s vision and values to help our communities flourish, which is why we look forward to seeing fans come together to support this critical cause and create a lasting impact on the communities we serve.”

Standard Chartered hopes the campaign will provide up to $75 million to help address economic inequality in the five years up to 2023.

Tickets for Wednesday night’s fixture, kick-off 7pm BST, are on sale now here – priced just £4 for children and concessions, and £6.50 for adults.