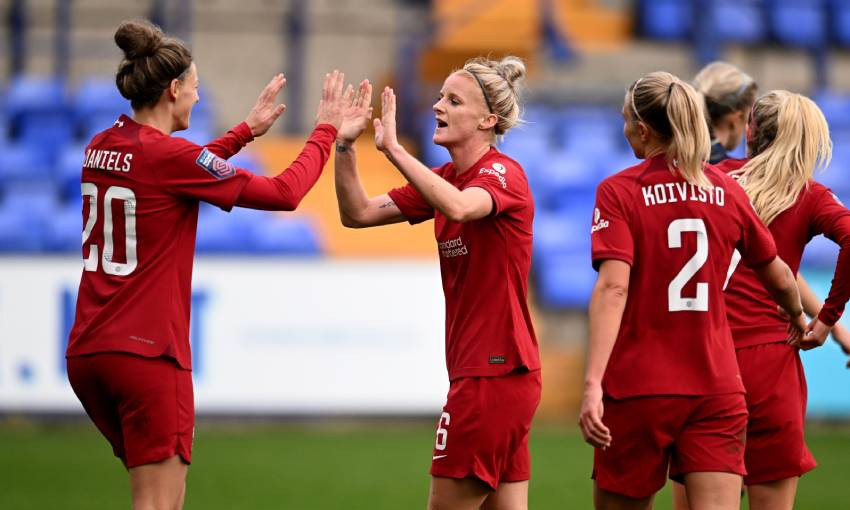 Liverpool FC Women made it three wins from three in the Continental League Cup with a 1-0 victory over Blackburn Rovers Ladies on Sunday afternoon.

The Reds maintained their position atop of Group B thanks to Jasmine Matthews' powerful header towards the end of the first half at Prenton Park.

Faye Kirby was handed her club debut for the contest and the 18-year-old goalkeeper repaid Matt Beard's faith with an assured performance and clean sheet.

Liverpool were entirely dominant in the opening 45 minutes, though their display was only reflected in the scoreline just before the interval.

Melissa Lawley was the first Red that came closest to breaking the deadlock, with her curler from all of 25 yards out striking the crossbar and bouncing clear.

Then, eight minutes prior to half-time, Carla Humphrey's finish at the back post from a corner was kept out by a last-ditch block from Rovers defender Hannah Coan.

But the pressure on the visitors' goal finally told on the stroke of half-time.

As Humphrey stood up a cross into the box, Matthews found herself unmarked and used her head to direct the delivery into the far corner of the net, establishing a deserved lead.

The second half saw continued dominance from the hosts, who looked to increase their advantage rather than settle.

Katie Stengel was one of three substitutes introduced after the break, and the striker had a good chance to make it 2-0 – but scuffed a finish when through on goal following a brilliant touch.

With Liverpool continuing their search for further breathing room, Leighanne Robe's first-time effort from a Humphrey corner 10 minutes before the end drifted just over.

But the second goal was not required as the Reds successfully closed the game out and continue to occupy first place ahead of their final group-stage fixture with Manchester City next month.