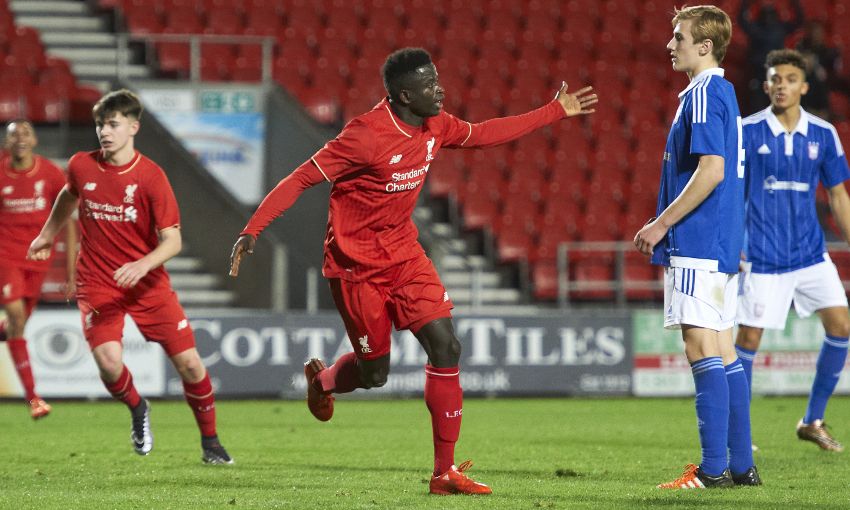 Liverpool U18s moved into the fourth round of the FA Youth Cup by beating Ipswich Town 2-1 at Langtree Park on Wednesday night.

Adam Phillips and Toni Gomes grabbed the goals for the Reds, either side of a response from Sam Ford, to set up a tie with Cardiff City in the next stage of the prestigious competition.

The result extended the unbeaten run of Neil Critchley’s side to 14 games on an evening when they rose to the considerable challenge of the visitors with a calm display.

Ipswich had barely touched the ball before the young Reds took the lead in the third minute.

Ovie Ejaria was the initial source of the goal, looking up and spraying a sublime diagonal pass from the left into a run from Ben Woodburn on the opposite flank that carried the midfielder to the area.

His neat control had immediately forged an opportunity to pick out Phillips in support alongside and the low cross into the six-yard box was perfect for the No.10 to convert from close range.

But their early celebrations were short-lived.

Ben Morris broke free with space to attack as a mistimed defensive header let the away side in and though his shot across goal was saved by Shamal George, striker Ford had followed up and squeezed in the rebound to make it 1-1.

Conor McKendry, once on the books at the Academy here, threatened a second when he cut in from the right wing and whipped a shot narrowly the wrong side of the far post, before Andre Dozzell curled a strike against the crossbar.

The Reds needed to reverse the momentum and Gomes’ strength created a chance that he swept off target to the left as the goalkeeper rushed out.

He made no mistake on 26 minutes, though. After a cross from one flank by Trent Alexander-Arnold was deflected onto the woodwork, Kris Owens sent in an inviting delivery from the other side and Gomes powered a header inside the near post.

Liverpool’s exploits in the Youth Cup in recent seasons have been enthralling and this game certainly followed suit, with both teams happy to subscribe to the end-to-end nature of the contest.

There was a slower start after half-time, but Critchley’s charges perhaps should have extended their advantage at the conclusion of a fine passage of play on 55 minutes.

They patiently exchanged the ball short and long, switching from left to right, and eventually space was worked for Gomes, who hesitated momentarily and allowed Ipswich to recover and clear.

The goalscorer was soon replaced by Brooks Lennon and the American was almost on target himself within seconds, driving a shot too close to the ‘keeper from Woodburn’s backheel tee-up.

Lennon’s introduction brought renewed energy to Critchley’s attack and he was involved in another flowing foray that saw Herbie Kane clip inches off target to the left from the edge of the box.

But the Reds had already done enough and the full-time whistle signalled their qualification for the Youth Cup fourth round and a home clash with Cardiff to be played by January 16, 2016.