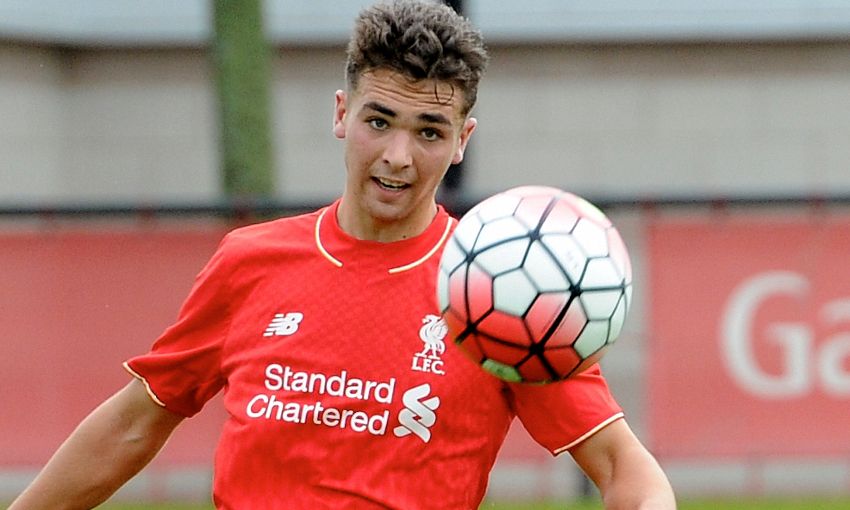 Liverpool U21s announce tour of USA in May

Liverpool U18s finished their Academy season with a point after an entertaining 2-2 draw away to FA Youth Cup winners Chelsea at Aldershot Town FC on Friday night.

Neil Critchley’s side were outstanding but they were denied victory as Blues stopper Nathan Baxter made a series of fantastic saves.

The young Reds started brightly and took the lead after 14 minutes. A great pass from Mich’el Parker released Ben Woodburn in space down the left. The striker found Adam Phillips, who in turn fed Herbie Kane to finish well with a low shot.

The home side drew level four minutes later courtesy of a set-piece. Miro Muheim’s delivery was met by Igo Ugbo, who was left unmarked to head beyond the reach of Caoimhin Kelleher.

Phillips restored the lead on 23 minutes with another brilliantly-worked goal. A superb pass from Brooks Lennon found the No.10, who drove the ball beyond the reach of Baxter.

The young Reds continued their pressure but Baxter was a formidable obstacle to get past - a one-handed stop from a Lennon header was simply stunning, and then he produced an unbelievable double save to deny Woodburn and Lennon again.

Critchley’s charges came out for the second half determined to keep up their attacking intent and try to put the game beyond Chelsea.

With Phillips the architect in midfield, Liverpool continued to create chance after chance. Woodburn had a golden opportunity from close range to make it 3-1, but somehow the reflexes of Baxter kept the ball out of the net.

Despite the visitors being so dominant, there was always the danger of Chelsea on the counter-attack and so it proved when they grabbed the equaliser on 73 minutes.

Ugbo, a lively and prolific striker, drove through the Reds backline and fired a low shot beyond the reach of Kelleher.

Liverpool then tried everything they could to get the winning goal.

A sublime pass from Phillips sent the excellent Ovie Ejaria racing clean through but his attempted lob from the edge of the box landed the wrong side of the post.

Kane curled an effort inches past the post and Ejaria then set up Woodburn but he could only fire off target from a great position.

Substitute Toni Gomes came close in stoppage-time too, only to be denied at close range by a brilliant save from Baxter after a powerful run.