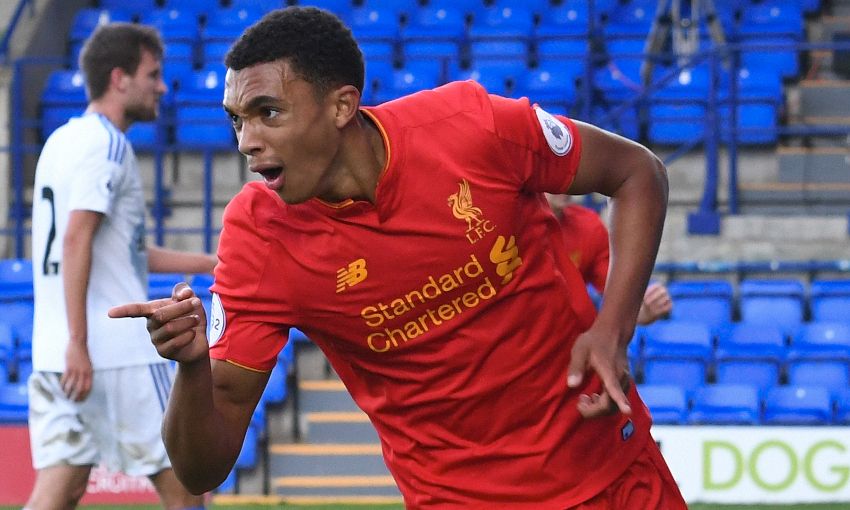 Academy prospect Trent Alexander-Arnold has revealed he has been using his time at Melwood to closely study Nathaniel Clyne, a man he believes is the best right-back in the Premier League.

The young Scouser has been regularly called up by Jürgen Klopp to train alongside the first team this season, and he is keen to make the most of that opportunity.

Not content with simply looking to hold his own among more experienced colleagues, Alexander-Arnold has been shadowing the player who occupies his preferred position at senior level.

And the teenager cannot think of a better full-back to learn his trade from than Clyne, who already looks set to build on an impressive debut season at Anfield.

"I’m trying to watch him and learn how good he is because he’s probably the best right-back in the league for me, defensively and going forward," he told the Liverpool Echo.

"He’s so consistent in everything he does. I want to still play the way I play but if I can learn things from him then I’ll try and do that every day." 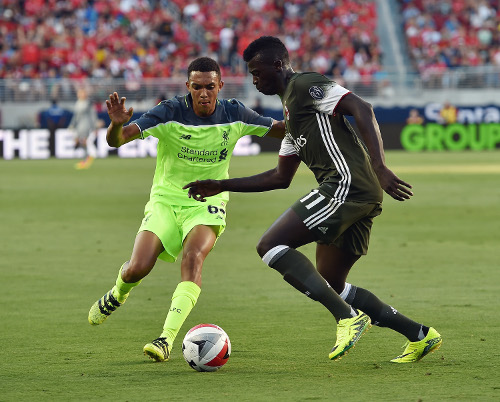 Trent challenges for the ball against AC Milan during pre-season

Trent is one of a number of young talents who have swapped Kirkby for Melwood on the instruction of Klopp in order to test themselves among the club's first-team stars.

The West Derby-raised hopeful says the move has been hugely beneficial, and hailed the welcome he and his fellow starlets have received from their senior counterparts.

"It’s unbelievable, every day just going in there and being round top quality players and top quality management as well," he added.

"Every day I’m learning something new as well and hopefully if I keep learning I’ll keep pushing on and fighting for places.

"I think all the players are really friendly with the young players. They’ve obviously been there at one point in their career as well.

"I couldn’t really pick someone out but I’d say the captain [Jordan] Henderson took us under his wing, talked to us about how hard it’s going to be but obviously we’re good enough to be there, that’s why we’re there."

The next logical step for Alexander-Arnold is a competitive first-team debut to follow his pre-season outings, but the 17-year-old knows just how much hard work he needs to put in to achieve that dream.

He is encouraged, however, by the opportunities Klopp has afforded the likes of Cameron Brannagan, Kevin Stewart, Sheyi Ojo and, most recently, Ovie Ejaria during his time at the club.

"I’m just going to keep working hard, keep learning, do the things in training he wants me to do. With time I’ll mature, I should be fighting for places," he continued.

"Ovie’s only a year older than me, I’m really happy for him because I know he deserved it with his performances and the way that he trains, it’s thoroughly deserved. Hopefully if I keep training well I’ll get into the manager’s books.

"I’d say all the team have a chance of breaking into the first team, it’s just about timing and positions really, so everyone has got a big amount of quality and we all want to push forward as a team and do well."

Alexander-Arnold has done his chances of making the step up the world of good by playing a key role in the U23s' recent run of good results.

Michael Beale's team extended their winning streak to four games in all competitions as they defeated Sunderland 3-0 on Sunday as Trent added another fine goal to his tally having netted in impressive fashion during a 6-2 victory over Tottenham the week before.

"It’s going well, we’re playing well as a team and obviously I’m playing well individually which is the best combination I can think of," he explained.

"But the team performance comes first. If we play well, I’ll have a good game as well is how I look at it.

"[The goal against Spurs] was probably the best goal I’ve scored. I’ve done it once or twice in training but never in a match - I just got in and hit it and hoped for the best."

Watch the U23s take on Wolfsburg in the Premier League International Cup live on LFCTV or LFCTV GO from 6.30pm BST.