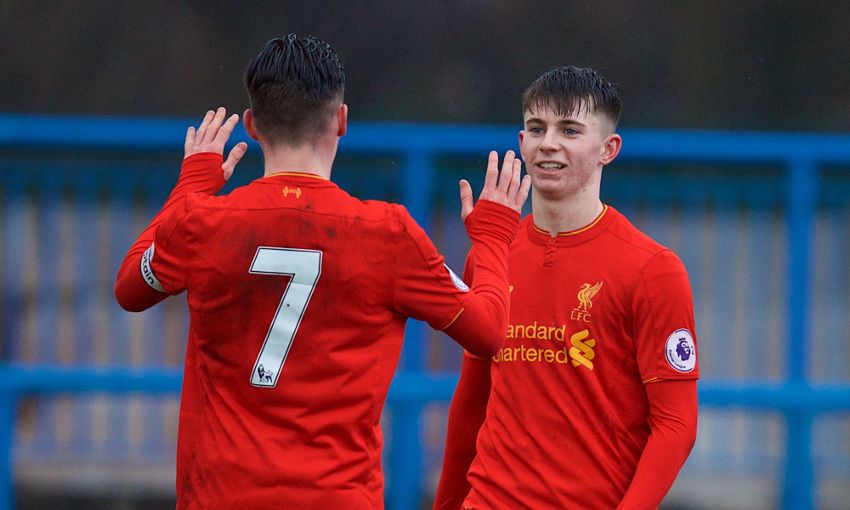 ‘Harry is in a good place and working hard’

Liverpool U23s clinched top spot in Premier League Cup Group G with a game to spare as they produced another convincing display to thrash Huddersfield Town 6-2 on Sunday.

The young Reds' place in the last 16 of the competition was already confirmed ahead of kick-off, but they showed little mercy to their second-placed opponents, who ended the game with 10 men.

Mike Garrity's side did much of the hard work in the first half, with Ben Woodburn at the centre of some ruthless attacking play.

Moments after almost teeing up Sheyi Ojo for the opener, the 17-year-old carved out a 10th-minute lead as he delightfully chipped the ball back across goal from Harry Wilson's threaded pass.

He then produced yet more magic 12 minutes later, showing quick feet to evade a hapless defender on the left-hand side of the box before teeing up Matty Virtue for a tap-in.

Liverpool continued to dominate, with their pace and invention proving too much for the Terriers to handle.

And, as the Yorkshire outfit attempted to hold out for half-time, they were hit with a double blow courtesy of Wilson and Ojo.

Woodburn was again the architect in the first instance, dribbling brilliantly into a dangerous position before seeing a saved effort followed in emphatically by Wilson.

Ojo then added further gloss as he nodded in from a Trent Alexander-Arnold cross after the visitors had worked a short corner.

The Reds showed little sign of taking their foot off the gas after the break, and were 5-0 ahead when Wilson intelligently looped a header over the 'keeper after Virtue had lofted a clearance back into a dangerous area.

But the ease with which they had carved out such a large lead perhaps led to a degree of complacency, which was punished when Olly Dyson broke into acres of space on the right hand side and finished at the second attempt.

The young Town forward added another after a poor Kamil Grabara clearance in the 72nd minute, but any slim hopes of a comeback were soon put to bed.

An off-the-ball clash between Alexander-Arnold and Jamie Spencer resulted in the latter seeing red, and made for a straightforward end to the game for the visitors.

However, there was still time for yet more Woodburn brilliance.

With the game entering injury time, the Wales youth international plucked the ball out of the air at the edge of the box with his right foot before smashing in with his left to put the seal on a big win.