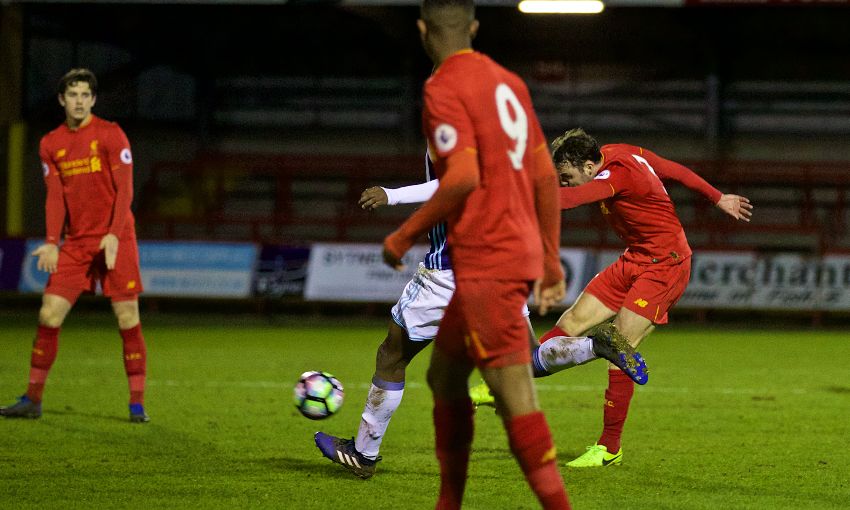 Connor Randall was rewarded for his ambition as he secured another win for Liverpool U23s in their Premier League Cup campaign on Tuesday night.

The young Reds’ place in the tournament’s last 16 had already been assured before they took on West Bromwich Albion in the final game of Group G.

But with the contest heading for a goalless draw as stoppage-time got under way, Randall found himself with the opportunity to shoot from outside the area.

“I just thought I’d have a go late on in the game,” the defender told Liverpoolfc.com.

“We were drawing, so why not have a shot? Luckily, it went in. I don’t score too many, so I’ll take whatever I can get!”

He added: “I thought we played well. They had some decent attacking players in the team; we saw the line-up and knew it was going to be a tough test.

“We were looking forward to it and I think we coped well with them – they didn’t have too many chances. [It was] an all-round good team performance.”

The closest Mike Garrity’s side had previously come to breaking the deadlock against a stubborn West Brom outfit was when Yan Dhanda saw a low strike tipped onto the right post.

It was the highlight of the latest encouraging performance by the nimble attacker, while Rhian Brewster belied his tender years with another robust and determined display, too.

“We’ve got a lot of good young lads in the U18s and U23s,” said Randall. “When they get the chance they want to perform.

“Rhian up front again, I thought he was excellent; he’s a very good player, only little but he’s strong and gets stuck in. [We are] full of great players in the Academy.”